Use both tokens on the vending machine above the old man robot to get 2 batteries. Walk down the steps to the left, extend your neck and climb up the railing back to the large guard.

Use the bandage on the batteries to make one large battery and give this to the guard. He’ll move aside so you can get to the door. Press the button on the door and go into the lift.

Click on the soil that the plant is growing from and Josev will sprinkle some on the ground. When a cleaning robot comes to sweep it up pick up the robot to take it’s light bulb with 3 pins.

Look at the panel on the left and place the light bulb in the spot with 3 holes. You’ll need to make a pattern with the lights in order to use the lift. Begin with the top light and follow the arrows. 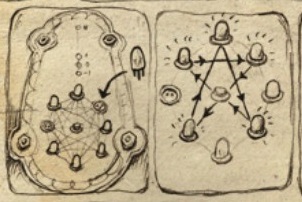 Exit the lift near the bottom of the screen to enter a room with a sweeper robot and large staircase. Click on the panel on the right wall to turn on the power then press the lever on the left wall down twice to move the sweeper robot into the bathroom.

Follow the robot into the bathroom and climb on top of him. Take the scissors and then drop down. Look into the toilet to see the bomb planted on the wall.

Go back out to the left and press the lever up twice. Use the panel on the right to turn the power off. Climb onto the sweeper robot and use the scissors to cut down the chandelier.

Go back to the lever and push it up once. Walk back to the bathroom. The robot has torn off the toilet. Grab the toilet paper to use it to swing down to the bomb. Open the panel on the bomb. You have a certain amount of time to deactivate it by connecting the right number with the right letter. The solution is D, B, E, A, C. 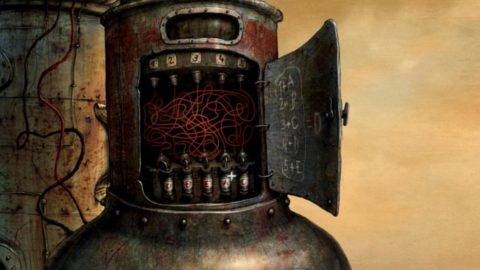 Close the door and climb back up. Walk to the left and then go up the stairs. You’ll enter a room with a mastermind robot. Open the closet on the left. You have two new puzzles where you need to move the green beads to the green colored areas. Follow the solution below if you can’t work it out. 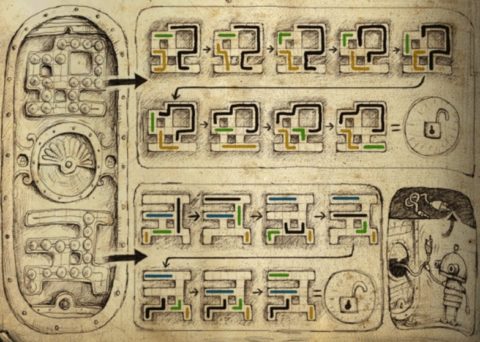 Once the compartment opens take out the connection cord. Use the cord with the mastermind robot. You’ll have to play a mini game where you need to collect a key, open the door to get the gun and then kill all of the 40 viruses. The blue crosses are health packs. It will take a little while hunting down all of the viruses but it isn’t difficult.

Once you’ve rid the mastermind of viruses he’ll give you the last light bulb for the elevator so that you can rescue Berta. Walk back down the stairs and enter the elevator.

Look at the panel on the left wall and place the light bulb in the last empty spot. Click on the light bulbs to draw a pattern as shown below. 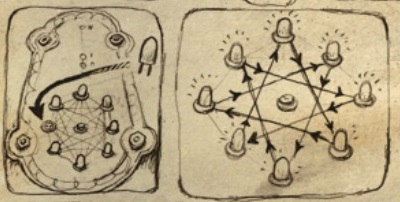 Leave the lift. You’re now in a tunnel under the oil bar. Grab the hammer and use it to smash the glass so you can grab the key. Go back to the lift and use the key on the panel on the right wall. Take the freeze spray and go back to the tunnel.

Use the freeze spray on the lock under the poker room and then use the hammer to smash the lock. The poker players will get flushed out and you can climb up the ladder to Berta.

After the cut-scene you’ll be back with the mastermind. Click on the orange computer screen. Turn the dials so that the vertical line is on 108 and the horizontal line is on 7. 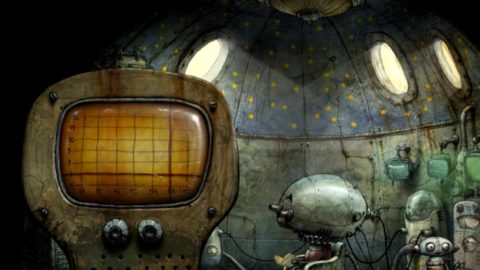 Listen to the tune that’s played and then walk out the door to the right. Walk around to the contraption on the left side of the observatory and take a look at it. You’ll notice the numbers 7 and 108. This is why we tuned the computer screen to those numbers.

Steps will appear on the side of the observatory. Quickly use Berta to turn the lever and the steps will remain in place. Climb up the steps to the rocket to win the game!

If you enjoyed Machinarium make sure you check out Botanicula and Samorost 3.