Wheatley is trying to test his new cubes but they’re just not cutting it. Portal through the broken grate at the back of the office and make your way around to the testing chamber. Place a cube on the red button to complete the test.

Go through to Wheatley’s first attempt at a testing chamber. Press the button and portal over to the other side. Wheatley will make you take this test twice so do the same thing and head through the exit. After this Wheatly will find some real testing chambers.

Drop into the funnel and place a portal on the wall opposite and one on the side wall. As you float through and back to the original funnel place the second portal on the ledge to the left.

You’ll float up to a ledge with a red button. Place the funnel under the dispenser and press the red button to release a cube. Use the funnels to bring it over to you and then use a funnel to place the cube on the button on the roof. Head through the exit.

Wait for Wheatley to get the chamber set up and then use the funnel to float across to the other side. Place the funnel under the cube dispenser and then press the red button. One the cube is in line with the panel on the opposite side replace the second portal so the cube floats towards you. 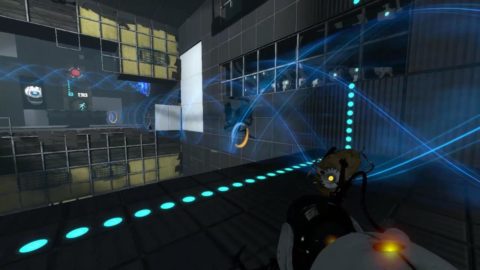 Place the funnel in front of the target and bounce over to it. Get off on the other side. Place a funnel going up, and then across to the exit so that the cube hits the button on the wall. Head through the exit to the next chamber.

Press the red button and use light bridges to stop the cube going through the barrier. Drop down, pick it up and portal back up to the beginning.

This puzzle at first appears pretty tricky. Here are the steps to get through it. Use the funnel to lift yourself up above the floor. Place a portal on the sloped platform with the target to fling over to the ledge. Pick up the cube and drop down.

Use the cube to block the laser which stops the funnel. Place a portal on the sloped panel with the target and the other above the laser. Use the bouncer to bounce through the portals and across to a high ledge. Grab the laser cube and drop down.

Use portals to make the laser hit the receptor by the lifts. The first lift will drop down. Stand on the first lift and then remove the laser. You’ll be lifted up half way.

Use a portal to move the cube deflecting the laser. Place a portal under the funnel and on the chequered floor panel to lift the cube up to the button. When the button is pressed the second lift will drop down. Walk onto it and remove the funnel to be lifted up to the exit.

The lower laser receptor on the wall moves the platform. The higher receptor turns off the laser field. Portal over to the platform, get across to the other side and press the button for a cube. Bring the cube back up to the platform and use portals to line up the cube so that it hits the receptor above the door. 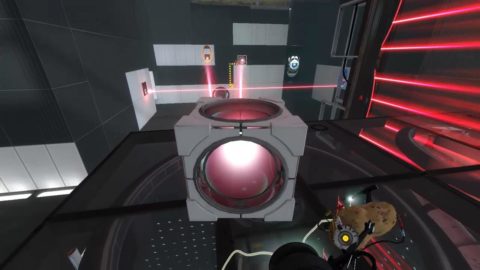 Portal over to the exit, then replace the portals so the laser hits the receptor once more and opens the door.

The lift is broken so drop into the funnel and follow the path around to the next chamber which is actually chamber 15. Press the red button to drop a cube onto a platform. Stand on the button to activate the funnel and place a portal behind you and then on the opposite wall to bring the cube over to you.

Portal into the glass room and place the cube on the button. Stand on the other red button and use the funnel to bring the orange gel in a line towards the ramp. 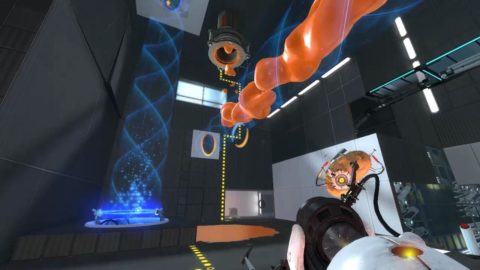 Drop the gel to make a run-up. Grab the cube and place it on the button that activates the funnel. Look out over the gap and place the second portal in the far room to the right so the funnel heads towards the exit.

Take a run up and you’ll bounce across to the funnel which will float you to the exit.

When the walkway collapses portal over to the chamber room. There are turrets behind a glass screen to the right and a gel dispenser on the other side of the room.

Press the red button to lift up a panel in the side wall. Use the funnel on the floor to lift yourself up. Place a portal on the sloped panel and one underneath you. You’ll be flung towards the gap, bouncing on the blue gel along the way, to the exit.