After the “surprise” head through the door and drop down to the next testing chamber. Place a portal on the wall or floor and the other behind the ledge on the back wall. Place a portal at the top of the light bridge and one on the floor between the two bouncers. Press the red button and two cubes will fall down and bounce into the light bridge. You can now portal back to the other side and pick them up. 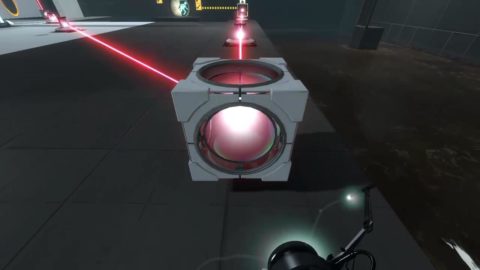 Use the light bridge to get over to the exit and make your way to the next area. On the lift ride down you’ll catch up with Wheatley who seems to be working on a plan to escape.

Use the cubes by placing them in the alcoves and deflecting the laser in the shape of a “W’. With the last cube deflect the laser to destroy the turrets before sending the laser to the final receptor. Use portals and the bouncer to fling yourself over to the exit. 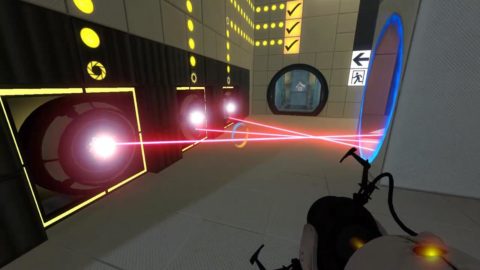 Place a portal at the end of the light bridge and one on the far wall so you can reach the button. Press the button and walk forwards to pick up the cube. The chamber will shut down and Wheatley will appear. Follow him out the exit he opens and make your escape. You’ll need to knock over a few turrets and make a couple of portals along the way but nothing too difficult. Finally enter the lift to end this section.