The Part Where He Kills You

This is the final chapter of the single-player campaign and ends with a battle against Wheatley. Step onto the bouncer to be taken for a ride. When he has you trapped place a portal on the sloped pillar and on the side wall. The white gel will splodge onto the platform your standing on. Portal over to the side wall to make your escape.

When you reach the end of the walkway place a portal on the wall and one on the panel far below. Drop through it to be flung across to another walkway.

Keep going and then portal across the gap in the walkway. After the large structure crashes through the walkway portal inside of it by looking through the grate.

The turrets in this room are harmless so head out the door and continue to the next room with turrets and a funnel. Use the funnel behind the turrets to float them away. Jump into the funnel yourself and let it take you to the room opposite. Drop off before Wheatley places a grinder in the wall.

In the next room use the funnel to float out the exit. When Wheatley tries to crush you place a portal in the panel on the opposite wall and go back the way you came.

Continue around the walkways and bounce across to the other side when the canister crashes into it. Walk around to the room with the turrets and portal into the room above and on the right. Stand on the button to activate the blue gel. Place a portal under the gel and on the wall opposite the turrets. You’ll need to find the right positions to hit all of them. 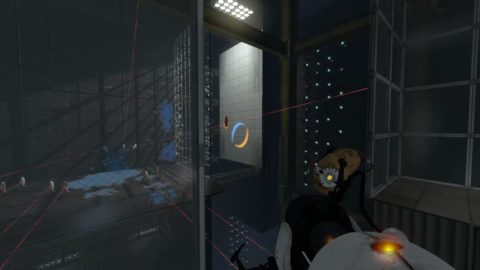 When you are done portal over to the bouncer and bounce across. Take the walkway up to the door on the left. 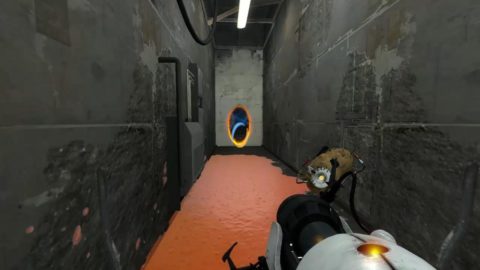 Make your way around the walkway and portal up the next shaft. Up the top you’ll spot a pile of corrupted cores and GLaDOS will come up with a plan. Plug GLaDOS in to the receiver and get ready to meet Wheatley.

Wheatley throws bombs at you and has a ring of shields. First you’ll want to trick him into throwing a bomb near the tube of white gel. Once it starts spurting out gel you’ll be able to use portals. Place a portal right in front of you and on one of the side panels. This should stun Wheatley.

GLaDOS will bring one of the corrupted cores. Grab it and place it on Wheatley. You’ll need to repeat this process three times before the core transfer can begin. The second time you’ll need to place a portal under him and the third time on one of the side walls once more. Retrieving the corrupted cores is slightly more difficult each time but by now you should have no trouble grabbing them and bouncing up to place them on Wheatley.

Finally, when the roof begins to fall apart and you catch sight of the moon place a portal on the moon to complete the game. Congratulations on completing Portal 2!