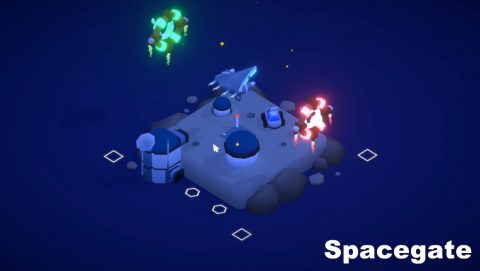 Spacegate is made up of 3 islands. You begin in the center and the green and red gates take you to the other two islands. First reduce the size of the larger pod to find the turtle.

Open the green spacegate and go through. Reduce the size of one of the trees to find pillar #1. Reduce the other tree to free the spaceship. Go back through the gate.

Go through the red spacegate. Make the laser taller to reveal a hammer. Make it taller again to reveal pillar #2. Enlarge the hammer and drop it on the giant worm. Head back through the spacegate.

Two pods should have been dropped off in the middle of the island. Grab them, place them on the hexagons and enlarge them so they fit with the other pod. A signal will be sent out. Wait about 5 seconds for a spaceship to drop down pillar #3. 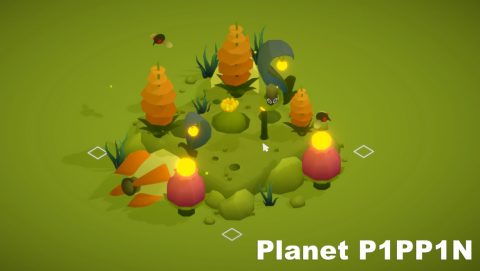 Reduce the size of the broken bits of rocket. Under the base is a weight and under the nose is pillar #1. Enlarge the red bulb flowers. When one of the flying bugs flies away a few seconds later a turtle will fly past. You only have one chance to grab it.

Enlarge the final red bulb and the bug will get caught in the plant, releasing pillar #2.

Enlarge the central plant. Enlarge the weight and drop it on the plant. It will release pillar #3. 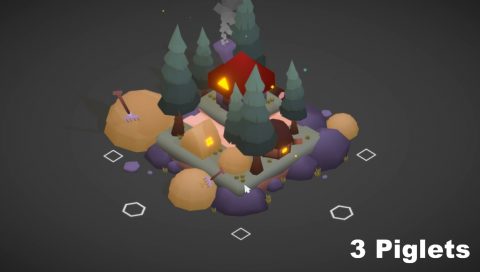 Spin the camera around and reduce the size of some of the logs on the log pile until you find pillar #1.

Reduce the sizes of the piles of hay. Under one you’ll find the turtle. Under another is a plate with 2 horns. Place the plate on the hexagon on the ground just behind the dark brown house and increase the size to large.

Reduce the size of hay near the brown tent to find a weight. Enlarge it and drop it on the horns. The brown house will be destroyed and leave behind a bottle.

Reduce the size of the bottle to get the cork. Place the cork in the chimney and enlarge it. The door to the house will open revealing pillar #2.

Place the horns on the other hexagon and drop a weight on it. The tent will get blown away, leaving behind pillar #3. 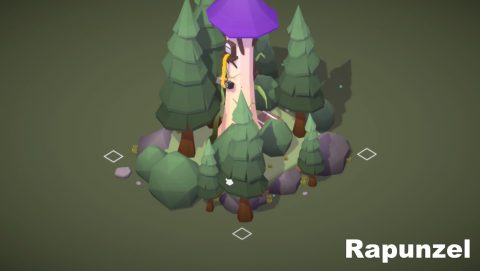 Make all the trees smaller so you can see what’s happening. Make hair longer and axe bigger to cut the hair and drop pillar #1.

The turtle will be hiding by a bush on the ground just off the island near to the hatch. Make the hatch smaller so it falls into the hole. Look for the balcony at the very top of the tower, just under the roof, for pillar #2.

Make the vine by the lower window smaller and hair will come out. Make the hair longer so it descends into the hole and then shorter again. It will pull out pillar #3. 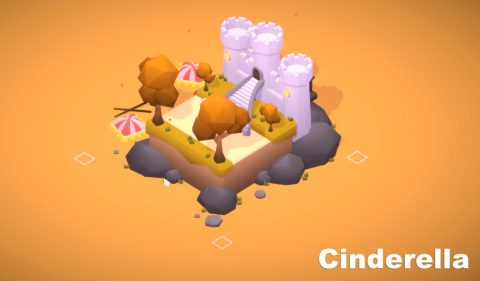 Make both tents larger and a campfire will appear. Changing the campfire changes day to night. Make campfire large and the pumpkin turns into a cart. Take pillar #1 from the cart.

Rotate the camera to see the back of the castle. You’ll notice the turtle hiding in one of the tents. Look under the staircase to find the glass slipper. Make it smaller and place it in the chest with the other one. The chest will close and open again with pillar #2.

Pillar #3 can be found in the other tent across from the turtle. I’m not sure if it’s always there or only appears after changing day to night or some other event. 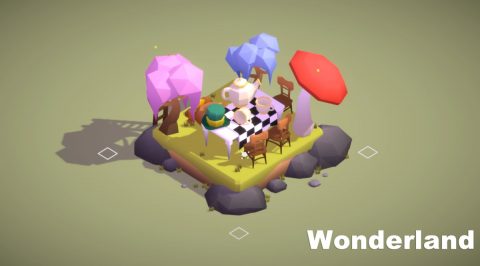 Make everything that you can smaller and grab pillar #1 from under the table. Throw the small version of everything down the hole, including the ladder. You’ll climb down the hole to the underground.

Pillar #2 will fall to the ground on the left side. Pick it up and place it on one of the square slots.

Remove the items from the platform or make them smaller. The turtle should be just on the ground by the white desk.

Make the red blanket smaller to reveal pillar #3. Place it down to complete the game!