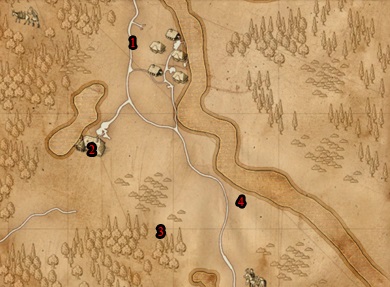 The first time you enter the Murky Waters area you’ll be met by Dandelion (#1) who’ll tell you that Triss teleported him over as well. He also mentions that Alvin is currently in the village and is staying with Alina. This quest remains throughout the entire chapter until Alvin teleports away again at the end.

Go to the Country Inn (#2) and speak with Julian. As you approach you’ll see him having a discussion with Celina. It seems the three of them are involved in a love triangle.

If Alvin is with the Gambling Ghost you’ll need to either win a game of poker to get Alvin back or kill the ghost. Once you find Alvin give him the amulet and he’ll tell you about the visions he’s been having.

The Alvin quest will continue to update but only after completing other quests so you don’t need to worry about. The other quests include Ripples when Alvin tells you he wants to be a Witcher, The Heat of Day and Free Elves.