The Heat of the Day 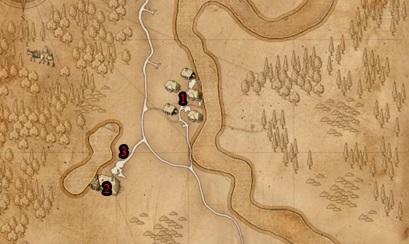 The Heat of the Day quest beings when you meet Alina in the Murky Waters village (#1). She’ll tell you that Julian and her have been arguing over whether or not they should adopt Alvin. She asks you to speak with Julian at the Country Inn (#2) and also to look for Celina. Your journal will tell you that she’s afraid Celina and Julian might be having an affair.

When you leave Alina’s house you’ll encounter Adam who is in love with Alina. He’s not concerned about Alina’s marriage to Julian and he wants you to speak to Dandelion at the inn to help him with a love poem.

As you approach the Country Inn you’ll see Julian and Celina talking outside. It seems Julian isn’t in love with Celina and Alina shouldn’t have anything to worry about. You can start up a conversation with Celina and make love to her at this point.

At some stage during the Chapter the sisters will go missing. A visit to the Raspberry Patch in the Fields will confirm that Alina is dead and has been turned into a Noonwraith. It seems the sisters argued and Celina killed Alina accidentally. Adam seeks revenge and kills Celina.

Go back to the Country Inn and tell Julian about the murders. He takes it rather calmly and you’ll have the choice to indict Adam or protect him. In order to deal with the Noonwraiths you’ll have to speak with the Healer or Abigail in their house (#3) near to the inn. She will tell you that you need to find Alina’s Broken Mirror and show it to her so that she might recognize that she’s dead.

Head over to the Fields and make your way to the map locations for the five Mirror Shards. The mirror can be reassembled either by the Blacksmith at his home just outside the Murky Waters village or the Elven Craftsman at the Elven Cave by the Lakeside.

Take the reassembled mirror to Alina at the Raspberry Patch. Unfortunately the mirror doesn’t work. Head back to the Healer or Abigail.The story changes at this point depending on whether you saved Abigail or let the mob kill her back in Chapter 1.

If You Rescued Abigail

Abigail will tell you that an inspirational poem might help to convince Alina that she’s dead. Dandelion will reluctantly agree to go with you to the Fields at dusk. Just before nightfall head over to the Raspberry Patch in the Fields. Dandelion has prepared a poem for two and you’ll need to select the correct answers for it to work. If you give the wrong answer Dandelion will recite his part again and give you another chance. The correct answers are “the deceased”, and “a ghost”. Alina will be freed from her curse and leave.

Celina is still wandering the Fields. If you have the Wreath of Immortelles from the Hermit then give her the wreath. This will break the curse and she will also be free to leave.

If You Didn’t Rescue Abigail

The Healer at the hut will tell you that you have blood on your hands and that you can’t save Alina. The only way to help her is for someone to go to the other side, as in kill themselves. Speak with Adam at his house. If you told Julian that he’s the murderer then Adam will be under house arrest. Go see Julian for the Key so you can get inside.

After you let Adam know what’s happened he’ll run off to the Fields. Make your way once more back to the Raspberry Patch. Adam will kill himself and reunite with Alina. The two of them will be freed from the curse.

Once the quest has been completed one way or the other, return to Julain at the Country Inn for 400 Orens and 4,000 experience points.