Kazakhstan is one of the most awkward levels in Tomb Raider: Legend. It features a long motorbike section that’s almost impossible to complete on the PC version on medium or hard difficulty. I recommend playing this level on Explorer mode.

After the cut scene jump off the edge of the cliff and parachute down to the rooftop. Use the minigun to take out the enemy Soldiers. 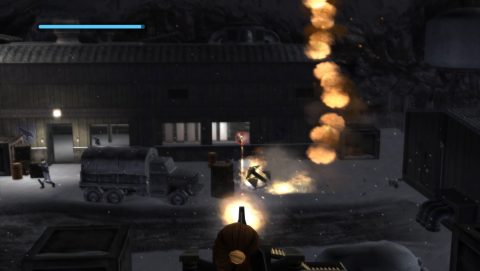 When you’re don use the flag pole to swing across to the next rooftop and break the box to find Bronze Statue (1/5).

Drop down and take out the next wave of four or five Soldiers. Enter the building with the open windows and head into the storage room behind the lockers. You’ll find Bronze Statue (2/5).

Climb up the ladder in the center of the building and take out the Soldier at the top of the tower. Jump across onto the tower and then jump down on the other side of the fence.

Take out all the Soldiers but focus on the one behind the minigun first. Shoot the barrel on the other side of the fence enclosing the other tower. When the gate blows open break the box for Silver Statue (1/3). 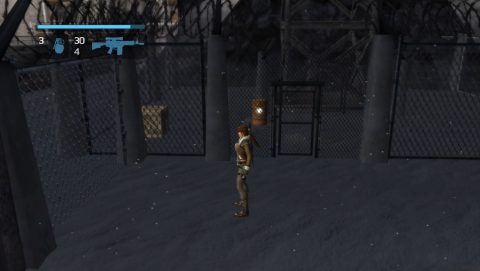 Enter the building with the green cross on the front for a short cut scene. The guards inside will give you the code to unlock the gate.

Head outside, take out the Soldiers around the gate and go through. Shoot the exploding barrels as they roll down towards you and enter the command building up the top.

Approach the central control panel for another cut scene then climb up the ladder to the roof. Climb up the tower and slide down the wire to the tower. Slide down the next wire to the train station. Drop down and take out the Soldiers while you’re waiting for the station doors to open. Quickly run through and hop on the bike. Follow the tracks to head to the next section.

This section is almost impossible to complete on the PC unless you’re playing on Explorer difficulty. There’s just not enough health packs and the Soldiers in the cars and bikes do too much damage.

To avoid taking too much damage try to swerve around wildly behind the riders to try to get them to fall off. You might be able to get rid of a few of them quickly this way.

After about 6 minutes of riding you’ll come to a path that runs alongside the train. Hop over to the train and ride along it until you get the cut scene. Get ready for the Quick Time Event. You’ll need to press Down, Right and then Left.

Use the grapple to pull the crane with the dangling rope closer. Jump to the rope and swing across to the other side. 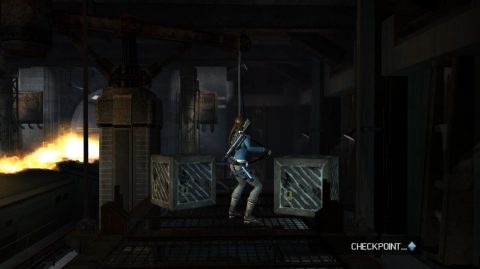 Climb back onto the platform and use the grapple to pull the second crane closer. Jump to the rope, climb up a little before the flames singe you and then swing across to the other side.

Shoot the fan in the vent and jump across to the wall so you can climb into it. Make your way through the frozen tunnels. You’ll need to jump over or duck some of the electrical wiring along the way. There’s only one path to take so you won’t get lost.

When you get to the second pit drop down instead of swinging across. Break the box for Bronze Statue (4/5). 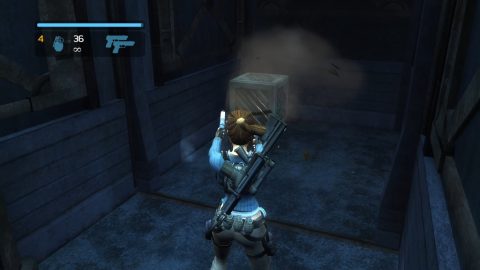 You can drop down to the floor and climb up the white container if you want. From here jump across to grab the air conditioning unit on the wall and then jump across to the walkway to the right.

Jump across to the next walkway and follow it along to the right. Jump out to grab the rope. This will lower the fuel delivery system and fill up the generator with fuel.

Before turning it on run back to the other side of the room. Climb up the vents to a walkway above. Use the grapple to open the door and shoot the box to reveal Silver Statue (2/3). 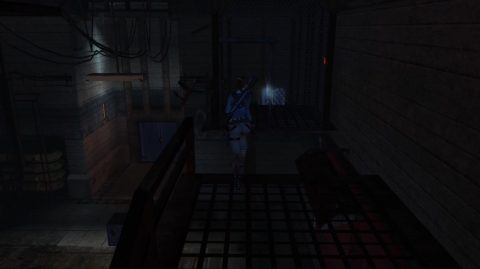 Drop back down and now use the grapple to attach to the generator. Pull it out to turn on the power.

Now that the power is on you can go through the door. Head out and make your way along the toxic passageway by using the grates and pipes to stay off the floor.

Make your way along the electrified pipes quickly or Lara won’t make it. 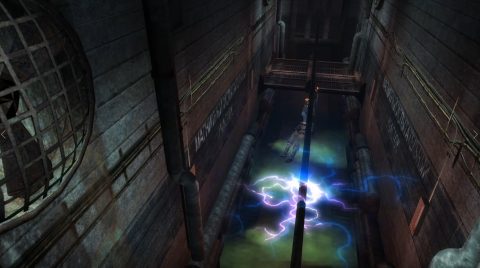 When you go through the doors at the end of the corridor you’ll run into Amanda. Her goons will destroy the bridge, leaving you on the other side.

Hop into the Tesla Gun and try to pick something up. It will quickly run out of power. Slide down the broken bridge and take out the Soldiers below. One of them will have a large riot shield.

Around the back of the tower on the right side you’ll find Bronze Statue (5/5). 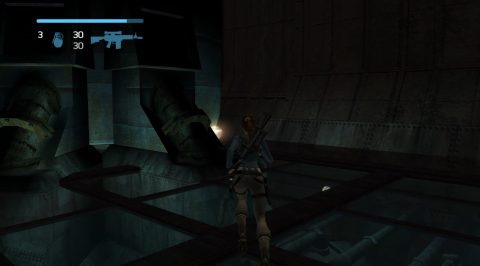 Grab it and then climb up the pole but watch out for the spark of electricity. Jump across to the ledge and climb up to the higher ledge. Turn around and swing from the poles to the rope.

Turn around to the left and swing to the pipe. Make your way around the poles while dodging the electricity until you can jump across to the ledge with the dead scientist.

Turn around and shoot the explosive barrel through the gap in the fence. This will blow open the gate so you can grab the Silver Statue (3/3). 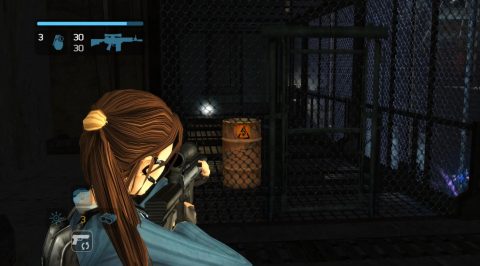 The tower is not powered yet so follow the tracks through the door. They will lead out to a large room with debris scattered about the place. Take out the 4 Guards first and then pull the Core as far along the track as you can.

Climb onto the core and then jump over to the ladder. Climb up and then onto he platform to the right. Swing across the pole to another platform and then use the rope to swing across to the Tesla Ball hanging down from the roof.

Climb around to the other side and swing across to another platform. Jump over to the ladder. It will slide down. Climb back up and jump across to the platform.

Shoot the explosive barrel and then swing over to the room with the dead scientist. Pull the Lever to power the Tesla balls. They should power the Core. Drop down and use the grapple to grab onto the Core and pull it along the tracks. 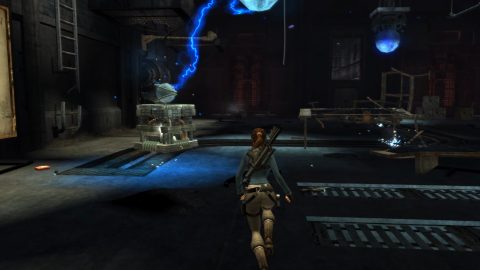 The Core will blast the debris out of the way. Once you pull it close to the door the tracks will become powered and the Core will move along automatically.

Follow the Core along the tracks while avoiding the toxic gas. You’ll need to use the grapple to pull up the cables so you can roll under them without being electrocuted.

Follow the Core to the door on the other side of the tracks. The doors should open once you get close enough.

Pull the panel out of the way and the Core will insert itself into the Tesla Tower. Go through the broken door to the right of the Tesla Tower and you’ll find an ancient shield.

Go out the other door which leads back to the Tesla Gun. This time it’s powered up. Quickly hop onto it and use it to grab a barrel. Fling the barrel at one of the Soldiers and you’ll hopefully take them out. Use all of the barrels and finish off any Soldiers with your guns.

Once the coast is clear use the Tesla Gun to remove the boxes on top of the wall just to the right where the bridge was located.

Next use the gun to drag along the platform dangling from the railing on the roof. You’ll need to drag it all the way to the right and up the raised section. To do this drag it along as far as you can to get some momentum and then push it the rest of the way. 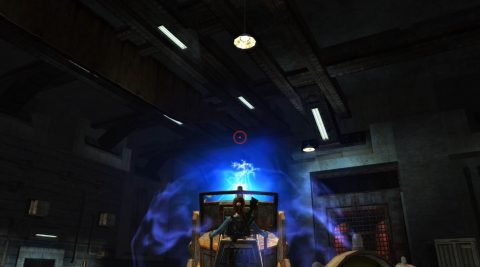 Hop off the gun and push the box as far along the raised ledge as you can. Jump onto it and from here jump over to the wall where you removed the boxes. Jump up to grab a higher handhold and then shimmy around the wall until you can drop down to a ledge.

Jump across to the platform and then another walkway. Turn around and swing from the pole to grab the Gold Statue (1/1).

Swing pack to the platform and then over to the walkway on the other side of the broken bridge.

Head through the door and use the sliding platforms to make your way around. You’ll need to pull yourself along with the grapple and dodge the electrified poles as you do.

Head through the door at the end for a final confrontation with Amanda.

Amanda will summon a frightening creature which you can’t hurt directly. Instead run around the edges of the arena and pull the four Levers. Each lever will release one arm of the mechanism above.

Once the mechanism has been released jump onto the Tesla Gun and use it to push each of the Tesla Balls back twice. The electricity should lock them in place.

Quickly lock each of the balls in place because you have a limited amount of time to get all of them in place. Once the whole arena is electrified the force field shielding the artifact will be released.

Use your grapple on the artifact in the center of the room above the Tesla Gun. This starts a cut scene and ends the level.