There are a large number of treasures in this area, 29 in total, and it seems like there’s almost one around every corner. Before the level starts you’ll get to choose Lara’s outfit and weapon. The Spear Gun will probably be the most useful.

When you start the level dive down quite deep and you’ll notice two rows of statues with a road in between. Swim over to the head of the closest statue on the left side. Enter the back of the helmet to find a Health Potion. Pull out the wheel and the statue will lift up the sword.

Swim to the next statue along and pull out the wheel. This statue also lifts up its sword. Swim to the third statue with the missing head and grab Treasure 1/30 from the top.

Swim down towards the main building on the right side to find Treasure 2/30. 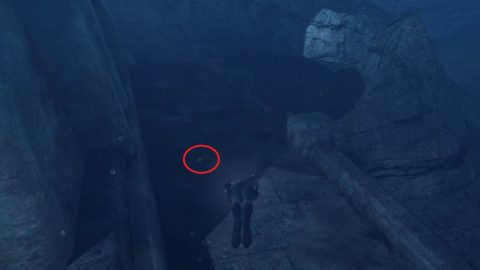 From here swim over the small stone fence to the right and down into the canyon. Almost directly below you should find Treasure 3/30. 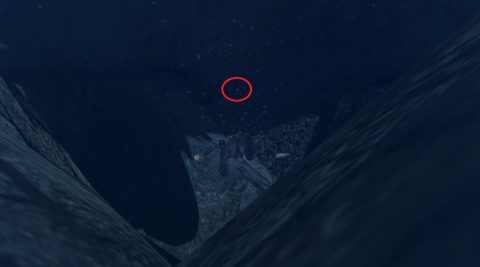 Once you pick it up head right along the floor of the canyon. In a small cave on the left side you’ll find a Health Potion and Treasure 4/30.

Continue along the floor of the canyon past the bones to find Treasure 5/30. Once you have it swim directly up to the first ledge of the main building. Behind some bones you’ll find Treasure 6/30. 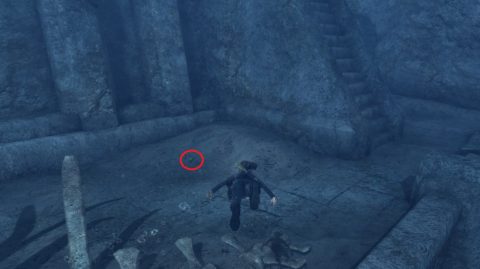 Swim up to the next ledge, grab the Health Potion and enter through the doorway. Swim up until you can pull up out of the water. Climb up the ledge in the corner, then to the thin ledge and jump up to the beam. Walk along it and jump to the ladder on the wall.

Climb up and jump back to he upper ledge. Break the jar on the right for Treasure 7/30 and then pick up the first Helheim Power Stone.

Climb down to the water below and swim down. Take the passage to the left of the entrance and swim up the stairs on the right side to find Treasure 8/30 lodged in some fallen rocks.

Swim back down the stairs and continue forwards to the ladder. Swim up to the top and then along the higher passage under an arch and swim up again. In the highest room you’ll find Treasure 9/30.

Swim back down and continue along the passage to the end room where you’ll find Treasure 10/30 and the second Helheim Power Stone. 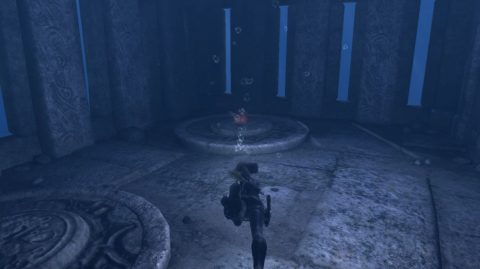 Swim back the way you came to the ladder and swim forwards to the rocks blocking the passage where you’ll find Treasure 11/30 lodged in the rocks.

Now swim down the ladders to the bottom and take a right at the intersection. Take a left to swim out of the building. Veer up and to the left to find the third Helheim Power Stone on a ledge with two of the standing stones. 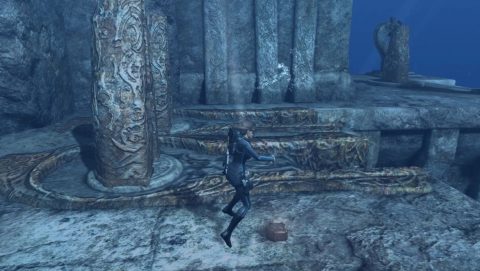 From here swim around to the other side of the building with the other 2 standing stones and grab Treasure 12/30 on the ground behind them.

Swim up and look for a gap in the wall above. Swim through the gap to find Treasure 13/30 on the left side of the dark room. Leave the room and swim down and forwards. Enter the entrance to the tower on the left side.

Grab the fourth and final Helheim Power Stone and break the jar for Treasure 15/30. Jump across the gap and break another jar for Treasure 16/30. From here either jump back and carefully climb your way down, or if you can manage it jump to the corner and you’ll fall down into the water below.

Leave the way you came and swim up to the right to find the standing stones. Place the 4 Helheim Power Stones into the 4 standing stones. Then swim to the center stone and pull out the wheel. The chains will move and the giant drawbridge will lower, giving you access to the main building. Swim down and enter. At this point you should have found 16 of the 30 treasures.

Swim back through the gap and continue forwards up the stairs. At the next corner turn left and swim up through the gap. Behind the rocks you’ll find Treasure 19/30.

Swim back through the gap and continue forwards. Just behind the next set of rocks before the stairs you’ll find Treasure 20/30 on the right side. Grab it and swim up the stairs.

Swim over the rocks ahead and pick up Treasure 21/30 behind them. Turn around and swim back through the gap. Turn left and swim up the broken stairs.

There is a symbol that you can activate on the right side of the doorframe but it needs to be done later once we’ve cleared out the room.

For now walk to the edge and take out Thor’s Hammer. You can deal with the enemies from here if you want or drop down to the lower platform and kill them from there. 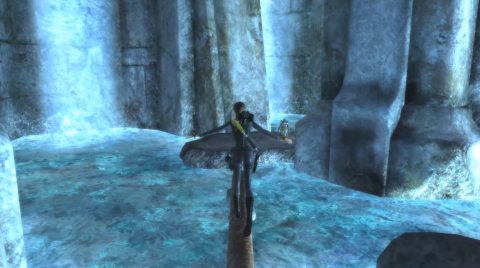 There is another symbol here but again we’ll activate it later. Run back along the fallen pillar to the lower platform in the center. Jump across to the top of the broken pillar and then over to the stone wall.

Climb along it to the left, then jump back to the pillar. Climb to the top and jump to the raised platform. Pull up onto it and grab Treasure 27/30. 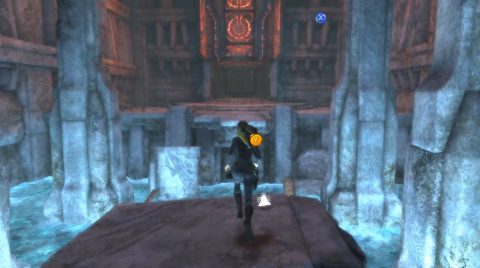 Jump to the pillar on the other side and slide down. Grab the Health Potion and break the jar next to it for Treasure 28/30. Jump across to the next platform further along and grab another Health Potion. There is another symbol on the wall but we’ll activate in the next section.

Jump across to the furthest platform to the left and break the jar for Treasure 29/30. Jump back the way you cam to the central platform with the pillar. Jump to the fallen pillar and run along it. Jump to the stone wall and then up to the ledge. As you step forwards you’ll get a cutscene and Lara will use the hammer to open the gate.

Before going through the door we’ll pick up the Relic which is hidden in this room up behind one of the waterfalls. To turn off the waterfall you’ll need to activate the 4 carved symbols.

When facing the entrance to the Helheim portal run to the door frame on the left side and press the glowing symbol. 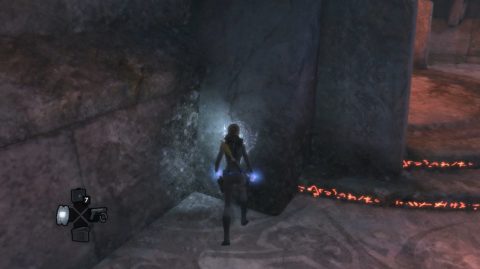 Make sure to also pick up Treasure 30/30 which is found in a jar in the far left corner. Run back towards the center of the room and jump down to the platform below and diagonally to the left. Press the second glowing symbol. 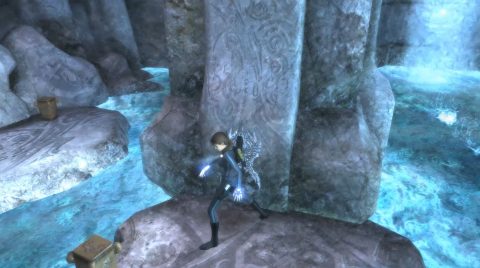 Jump across to the center platform and climb the pillar to the top. Jump over to the raised platform, then to the broken pillar on the other side and finally over to the stone wall.

Traverse across it to the right, jump back to the broken pillar and over to the platform below the entrance. Climb up the pillar and jump to the ledge above. Press on the glowing symbol on the left door frame of the entrance. 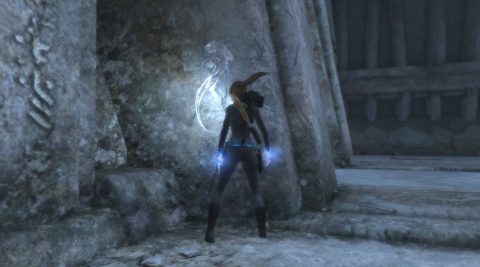 Drop down to the platform below and run across the fallen pillar to the left. Press on the final glowing symbol to turn off the waterfall. 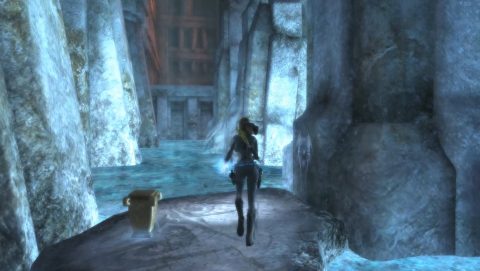 Make your way back to the raised platform in the center. Grapple onto the ring and take a big swing to the alcove behind the waterfall where you’ll find Relic 1/1.

Carefully swing back to the raised platform and climb up to the entrance to the portal. Run forwards to the first corner and grab the Health Potion between the two jars.

Continue making your way around the passage and get ready with Thor’s Hammer. You’ll be attacked by many Thralls and a few Yeti along the way. The slam attack is the best way to deal damage to multiple enemies at the same time. 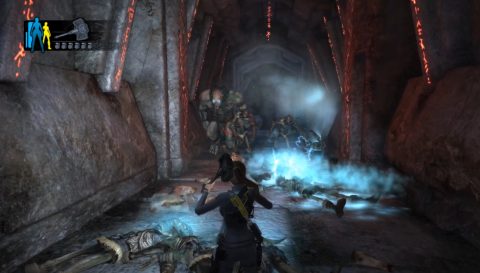 It may seem like the stream of enemies is never ending but they do eventually run out. Keep pushing forwards until you come out to the room with the large waterfall and a cutscene begins.

After the cinematic run down the next corridor, taking out the Thralls and Yeti as you go. At the first corner you’ll find a Health Potion. Continue forwards, slide down the ramp and jump over the gap.

Once you head around the next corridor you’ll have one more Yeti to fight and then you’ll come out to the chamber with the Midgard Serpent device.

Walk forwards and pick up the Health Potion. Jump to one of the floating blocks and ride it around to the next platform with the grappling ring. 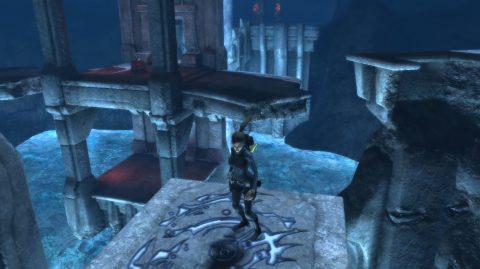 Jump to the platform, grapple onto the ring and walk off backwards to the lower ledge. Pull up for a Health Potion and then jump to the ledge closer closer to the center. Use the hammer to deal with any Yetis and jump across to the next platform to the right. Use the gauntlet to push in the glowing stone and the first part of the device will be unlocked.

Run towards the center and jump to the platform to the right. Continue with another 2 jumps as you make your way anti-clockwise around the structure. You’ll see another glowing stone. Push it in to unlock the second part of the device. 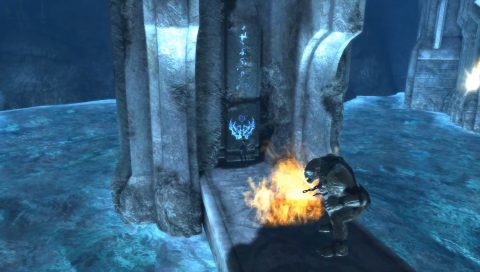 Pull up and then climb up to the higher ledge. Jump back to the pillar to the right and pull up. From here take a big jump to the platform with the ring. 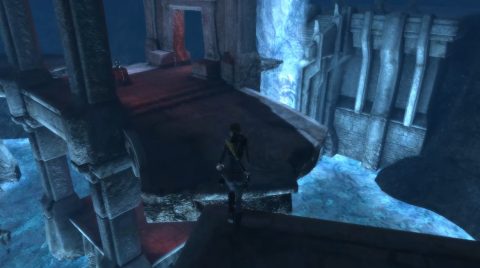 Continue across the platform and jump the gap to the next one. Climb up the stone to the back of the device and use the Hammer to break it. The stone blocks that form the ramp will loosen and begin to float.

Drop down the other side and jump to the floating blocks. Ride it around to the next platform just past the waterfall.

Jump to the center of the platform where you’ll find a Health Potion. Chimney jump up to the handhold and climb around to the right. Once you’ve climbed around to the side climb up and jump up as Natla hurls a fireball at you.

Continue climbing up as high as you can and make your way around to the front. Climb up to the walkway and run along it to the next pillar. Kill or avoid the Yetis and use the ring to grapple across the gap. Keep running along the walkway to the next pillar and push in the glowing stone. This releases the third mechanism

Run back to the previous pillar with the ring and grapple onto it. Climb up halfway and swing over to the right. Climb up to the top and then jump to the floating blocks.

Ride on the floating blocks to the next pillar where you moved the stone and jump to the upper ledge. 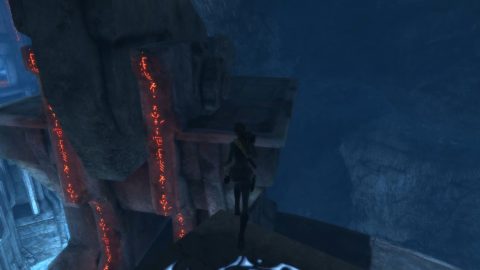 Climb up behind it and use the hammer to break the mechanism. More stones will start floating around the central tower and you’ll get a short cutscene.

Run around to the side and jump to the floating stones. Make your way across them to the central tower. Climb up the tower to the top rotating section. Natla will hurl more fireballs at you just as you jump up. 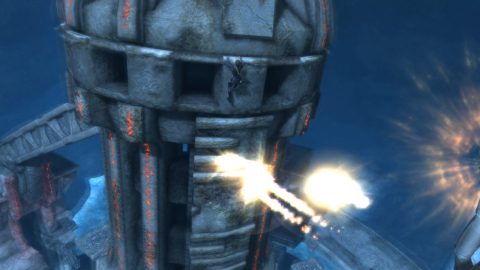 Hold on until you’re over the final ramp. Drop down onto it and slide down to the final mechanism. Use the hammer to break it and enjoy the final cutscene.