Furion and Tyrande enter into the Barrow Deeps in order to find the Druids. There’s no base building in this chapter, just exploration and finding loot. There are three parts to this chapter, the first with both Tyrande and Furion, the second with Furion in search of the Barrow Deeps and the third is when Tyrande goes to rescue Illidan.

Awaken Druids – Find the location of the Barrow Deeps and summon the Druids.

Free Illidan – Tyrande must go in search of Illidan and free him from the prison.

Bear Necessities – Get water from the fountain of life and return it to the Furbolgs.

To many to list. These caves are filled with loot around every corner. Many of the creeps you kill will drop items for you. I’ll list some of the most valuable below.

Necklace of Spell Immunity – Dropped by the Biggest Panda Ever. Very useful item for the last chapter.

Claws of Attack +9 – Dropped by watchers over the crystal walkway.

Wand of Lightning Shield – Dropped by one of the Revenants.

Spider Ring – Dropped by a Spider. Increase agility by +1.

Talisman of the Wild – Given after completion of the Bear Necessities quest.

Take your army south until you come to a crossroads. You can head either east, west or south. Explore east or west first. There are a group of Kobolds to the west and Wendigos to the east. 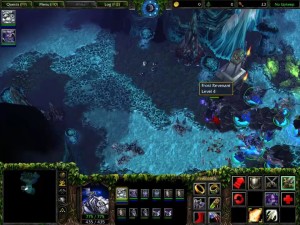 Now continue south and then head west to take out the Frost Revenants and Skeletons. One of the Revenants will drop a Wand of Lightning Shield. Tyrande always has the Shadowmeld ability while underground so use her to scout out what’s ahead.

To the east is a Spider with a Spider Ring that increase your Agility.

Continue east as far as you can and you’ll see some Mushrooms with bones underneath them. Use Furion to Cast the Force of Nature spell on them until the path is clear. Beyond you’ll find the Largest Panda Ever. Once killed he drops the Necklace of Spell Immunity which is very helpful in the last chapter. 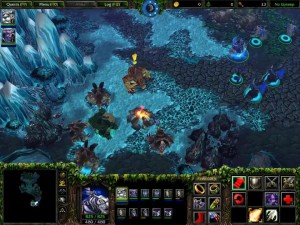 Continue south until you come to the Corrupted Fountain. Kill the Spiders here and continue south and talk to the Furbolg Usa Warrior. He will give you a vial and ask you to fill it with the waters of life.

The Fountain is not too far away in the north east. It’s guarded by Thunder Lizards. Kill them, fill up the vial and return it to the Furbolgs. In return you’ll get a Talisman of the Wild which can be used to summon a Furbolg three times.

Head to the south east until you find the Prison entrance. Furion’s brother Illidan is trapped inside. Tyrande will split from the party to go and rescue him.

After Tyrande leaves Furion goes in search of the Barrow Deeps. Head east, taking out the Sludge Monstrosity and other creeps along the way. You’ll come to a Circle of Power. Step on it to activate the bridge.

Over the bridge one of the Watchers will drop the Claws of Attack +9. To the south is a Fountain of Mana. To the north are Black Dragon Whelps. 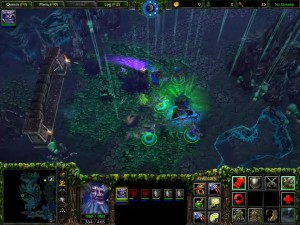 As you head north you’ll discover the location of the Barrow Deeps. Furion must use the horn in the Circle of Power and none of the Druids must die. Save the game here just in case something goes wrong.

Run your units through the enemies without engaging them until you come to the Sludge Monstrosities guarding the gate. Cast Tranquility here to heal your units while you fight them.

Smash through the gate and bring Furion to the Circle to complete this part of the chapter and awaken the Druids.

Tyrande has entered the prison in search of Illidan. A Watcher and two Wardens will attack as soon as you enter. There is a path west which is blocked and a path to the north and south. The north and south paths both lead to a Circle of Power. Activate both of them to open the gate to the west. 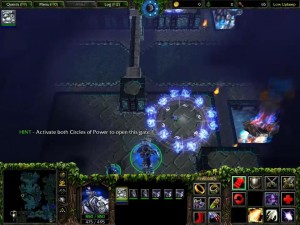 The pic to the right shows the southern Circle of Power. Activate this one and the one to the north to open the gate.

With both Circles activate head through the gate to the west. Keep going west and then north to find the Way Gate that leads to Illidans cell.

When you pop out the other side of the Way Gate you’ll find a Fountain of Health just to the south. This is a good spot to heal up if you need to.

Follow the path around to the north. Eventually you’ll find Califax, one of the Keepers of the Grove. Destroy the Keepers to free Illidan and complete the chapter.

Continue to the next chapter, A Destiny of Flame and Sorrow.