Click on the lamp and a genie will pop out and you’ll get a creature card. Each of your five characters is given a wish but Mr. Lantern doesn’t know what he wants yet. Start with the others first.

Mr. Twig – Pull on the rope and pull it down. A Santa creature will appear and drop off a present. You’ll receive a creature card. Click on the present to open it.

Mrs. Mushroom – Click on the handle and crank it clockwise to start the Ferris wheel and get a creature card. Click on the yellow creature when you are ready to go back.

Mr. Lantern – After the others have had their wishes Mr. Lantern figures out what he wants. Click on the string to untie it and a mug will fall on the spider and you’ll receive a creature card. You’ll head to the left, be attacked by more spiders and drop down to a new area. 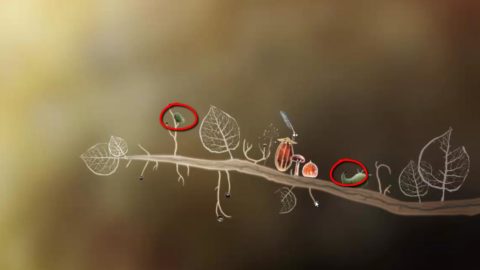 Click on the head (on the left side above) and place it on the body of the green creature for a creature card and another story. Go right for another creature card, then up to the right and left. 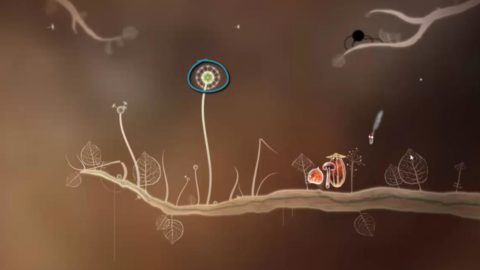 You’ll notice a dandelion here. Shake it to remove all of the seeds and then grab the Dandelion and receive a creature card.

Go right, up, right and down to the right.

You’ll see a brown slug-like creature. When you click on him he’ll tell you he wants the bare dandelion. Give him the Dandelion for a creature card and he’ll give you a lift over to a new branch.

Next Part: The Three Lost Children