Drop down the hole in the balloon machine to the village There are 18 houses we are going to explore here but before we get lost in the village go to the left first.

Click on the large potato and Mr. Lantern will try to grab it but get carried off by one of the ants. You’ll receive a creature card. Go down to the left.

Click on the cork and pull it out of the ants nest. Enter the nest.

It’s dark inside but you can see Mr. Lantern shining in the middle. Go to the left to avoid the ant and then try the different paths until you come to Mr. Lantern in the center. You’ll get a creature card for stumbling onto one of the baby ants. Click on Mr. Lantern until he wriggles free and you’ll return to the village. 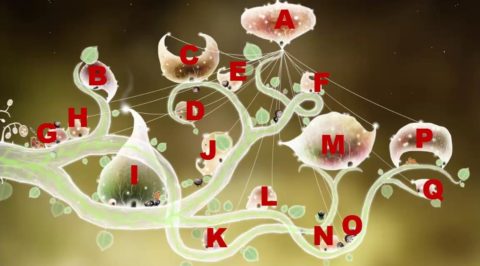 Exploring the houses from left to right.

House G: Inside you’ll find a tap with some sleeping creatures. Have each of your characters drink from the tap for a different dream.

Mr. Lantern – Run him from left to right around the bubble until he can run fast enough to reach the small bubble at the top.

Mr. Poppyhead – Move Mr. Poppyhead left and right to catch the bubbles. Catch the one with a bird in it to find your first bird and end the dream. Click on the bird to add him to your inventory.

Mr. Feather – Float down until the bubble pops and receive a creature card for completing all 5 dreams.

House B: Click on the Shaman three times until she talks to you. Give her the potato and in return she’ll give you the bird egg and you’ll get a creature card. 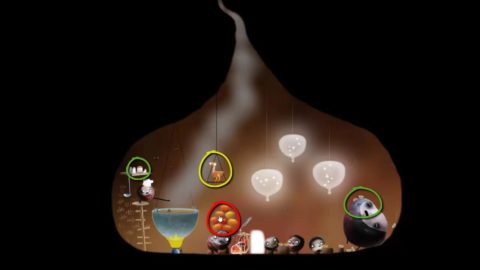 A chef is stirring a pot and a bird sits on a triangle. When a little creature enters carrying a pile of fruit click on him to make him drop them and pick up the orange fruit from the floor. Click on the pepper behind the chef and shake it over the large creature in the right corner to wake him up and get a creature card. While the chef is distracted grab the second bird sitting in the triangle.

House K: Click on the cupboard to open it and take out the empty bottle. Use the empty bottle on the lamp to draw out the light into your glass bottle. With everyone sleeping now you’ll be able to pick up the third bird and get a creature card. 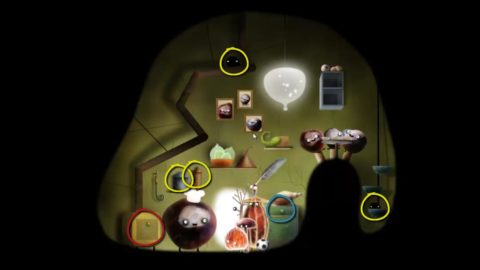 Open the green draw next to Mr. Poppyhead to find a coin. Find the four shadow creatures for a creature card. There’s one in the blue jar above the chef. Click on it until the top comes off. Then pull the lid all the way up on the jar next to it. Click on the shadow creature hiding behind the pipes near the top of the roof and the one hiding in the bowls to the right.

Open the oven to see a bird being cooked inside. Give the cook the orange fruit you found in House I in exchange for the fourth bird.

House N: Pull the cork out from the wall. Open the pink umbrella for the fifth bird. Click on the handle of the vault and turn it around clockwise until it opens. Inside you’ll find the yellow toast and get a creature card. Place the orange balloon above the spring. Click on the spring, pull it down and let it go to pop the balloon and release a creature, giving you another creature card.

Exit the house and re-enter. Place the bird egg on the table that Mr. Frankenstein was on and pull the lever for the sixth bird.

House P: A little creature is riding on a bird and playing tennis. Click on Mrs. Mushroom to play tennis with him. Win 3 points to get the eighth bird and a creature card.

House J: A little bird is up on a pedestal. Click on the yellow toast and place it on the bird. A creature will come out and give you the tenth bird and you’ll get a creature card. 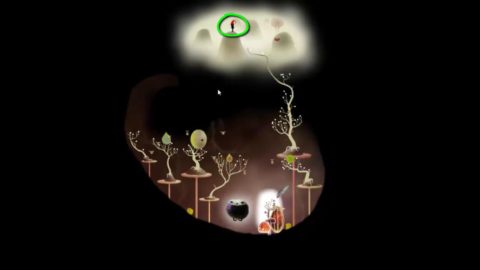 House C: Use your light (jar with fireflies) on the empty lamp to light up this house and get a creature card. Click on the trapeze and pull it down. Let it go when the little bird is in the middle. Grab the eleventh bird. You can get another coin here by clicking on the creature to the far right.

House D: Click on the frames and spin them around. A coin may drop out of the one to the top right if you don’t yet have three. Talk to the little creature and give him the fire plant. He’ll give you the twelfth bird and you’ll get a creature card.

House H: Pick up the coin and put it in the slot. It will start raining. Place two more coins in the slot to flood the room so you can grab the thirteenth bird. Exit the house and come back. When the stork’s beak is above the frog click on the stork for a creature card.

Now that you have all of the little birds head back to House A to complete this section and get 3 creature cards.

Next Part: The Four Colored Discs