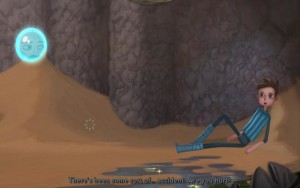 After defeating Mog Chothra Vella and Shay switch places. Vella falls into the ship after trying to punch Shay and Shay steps aside and finds himself in Shellmound for the first time.

Shay’s in a bit of a daze. Click on him to wake him up.

After a dialogue with Shay’s father head over to the left into town.

One of the hexipal buddies has been damaged. Walk over and pick him up. You’ll also see Car’l and Marshal Dune in the town.

The first order of business is to talk to Alex in the Dead Eye God’s temple. He’ll give you some information about how to get the ship up and running. There are a number of things you need and you can go through them in any order.

The Hypercam is a critical part of the ships control mechanism. Ask Alex about it and he’ll draw you the schematics. We need to take the schematics to Marshal Dune but as you can see he still can’t talk with the pitch pipe still lodged in his throat.

Walk all the way to the West until you come across the snake. Let the snake grab you and just wait. Shay loves hugs so won’t be bothered by the snake (Mr. Huggy) at all. Eventually the snake will get tired and just fall off. Pick up the snake and walk back to Marshal Dune. 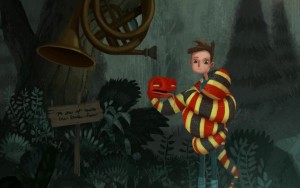 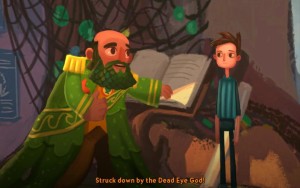 While heading back you can check Curtis’ mailbox to find the flyer about Vella.

Give the snake to Marshal Dune. It’ll squeeze him until the pitch pipe is dislodged. You’ll grab it and the snake will slither back to the tree.

Now that Marshal can talk show him the schematics. He can make anything as long as it’s made out of sand. Tell him “I think sand is the perfect material for making spaceship parts!” and he’ll have it made in a jiffy. You’ll now have the hypercam sand model.

Walk to the left and place the hypercam sand model next to the tree on top of the sap. Show the tree the flyer of Vella. The tree will vomit, covering the sand model in tree sap. Pick up the mold for a hypercam and walk to the left to Curtis’ house. 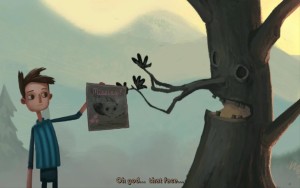 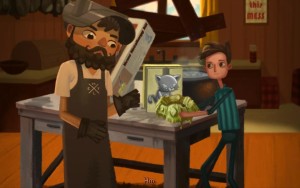 Curtis has left wood carving and gone into metal. Just the guy we need to turn our mold into a real hypercam. Go through the dialogue with him then give him the mold for a hypercam. He’ll pour metal into the mold and give you the superconductive gyroscopic hypercam. Go back to the ship and hand it to Alex.

There are still a number of things we need to get the ship up and running again. In order to get the ship’s anti-gravity thrust unit we need to go back up to Meriloft. Talk to F’ther and a scene will play out showing Harm’ny Lightbeard stuck on his cloud.

Climb up the ladder and you’ll end up pulling Brother Lightbeard down. While you’re still on the ladder talk to F’ther and ask him if he can untie the bow on Harm’ny’s cloud. Tell him it’s the way to save him.

You’ll get a look at the knot. You’ll need to remember what kind of knot it is. For now don’t try to untie it. Head back to Car’l, the knot expert, and ask her about knots. She’ll ask you to describe it so pick the phrase that best matches the image of the knot. 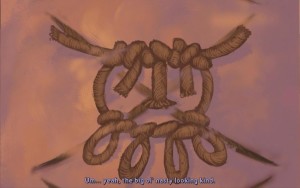 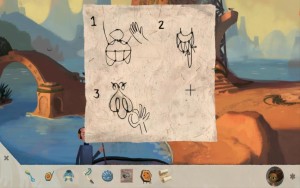 Car’l will try to draw you a diagram but she has nothing to draw with. Head back to Alex and ask to borrow his space pencil. Give the pencil to Car’l and she’ll draw you the knot untying instructions so you can unty the knot. If you get it wrong you can come back and ask her for a new diagram.

Go back to Meriloft and pull down the ladder with Harm’ny on it again. F’ther is a verbal learner so we need to describe the untying instructions to him. Talk to him and tell him “Let’s give that knot another try, OK?” You’ll need to match each step of the knot untying instructions with a verbal description.

Hopefully the descriptions will be fairly obvious. If not the knot will turn into something new and you’ll need to get a new diagram from Car’l.

Once the knot is untied a cut-scene will play out and you’ll be back in Alex’s ship.

Talk to Shay’s Father and he’ll tell you that he needs to balance the ph level of the sealant. The things we need are up in Meriloft so head back up the ladder to Meriloft. Go back to the peach tree and climb down. We’ll talk to the druids later. 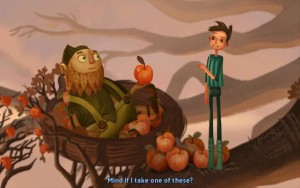 Go to the left and you’ll see Gus with a pile of peaches. Talk to Gus until he gives you the fruit tapper. Take a peach from the pile before you leave.

Head back to the right and have a look at Jesse’s egg. You’ll see it’s about ready to hatch. Use the fruit tapper on the egg to help the little guy get out. Pick up the egg shells that fall to the ground.

Go back to Shay’s father and use the spoon to measure the ph level of the sealant. The ph should be 3 before you add anything to it. Scrape some egg shells into the mixture to make it more alkaline. This will increase the ph to 6. Do it once more to increase the ph to 9.

To bring the ph balance back to 7 add the peach to the mixture and you’ll be rewarded with a small cut-scene.

To get the radiation suit once again we need to head back to Meriloft. This time head to the far right where you’ll find M’ggie and Vella’s sister, Rocky, selling cupcakes. Go to the north and talk to Grandpa. Ask about where to find money and Ch’t will give you some.

Give the money to M’ggie and you’ll get a cupcake. Head to the west and talk to Husker and Walter. Walter loves cupcakes but only eats the icing. Give him the cupcake and you’ll now have a cupcake without frosting. 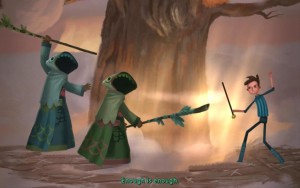 Fight the druids with the cane. After the fight the druids will fall through the clouds leaving their cloaks behind. Take the cloaks and head down to where the festival was held. You’ll find Lightbeard now stuck in a cage and Twyla talking to Vella’s mother.

Talk to Twyla and when you have the opportunity tell her that her costume is cool. She’ll agree to make a costume for you if you have a pattern and material. Give her the baby space suit and the druid cloaks.

Twyla will make the costume for you so take the radiation suit to Alex to end this part.

The electronics genius is the last thing we need before we can start flying the ship to rescue Vella. Head over to the talking tree and after completing the rest of the dialogue offer to tell it a joke. There are a number of jokes you can tell but the talking tree wants to hear a tree joke.

Once you get it right the tree will laugh and drop the fish plaque. Pick it up and give it to Car’l. She’ll want to know your secret. Give her the crotchet hook and she’ll give you the wire. 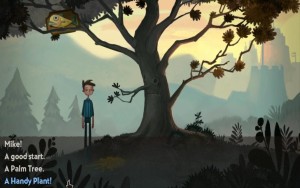 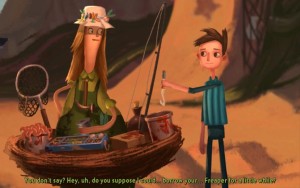 Go back to the ship and click the wire onto the hexipal and you’ll be able to place the wire at the back. When fixing up the hexipal buddy keep these things in mind:

1) You can place the hexipal on the recharging station at the left side of the temple to find out how the symbols correspond to the current wiring.

2) To see what symbols you need switch over to Vella’s point of view and look at the family photo in the control room. You will need to play up to the point where she can get inside the control room.

4) When you put down wiring you start with Blue, then Yellow and lastly Red. 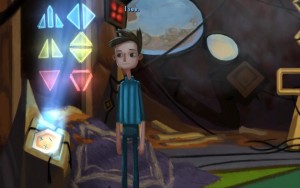 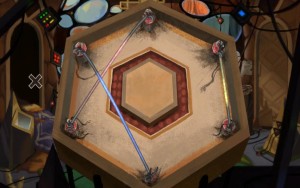 The easiest way to do it is to map the symbols on the back of the hexipal. You do this by placing the 3 wires each at a different node and then writing down which symbol each node corresponds with.

Placy the hexipal on the recharging station. You’ll know you have it right because Shay will say “I have a good feeling about that pattern.”

Give the hexipal buddy to Alex and he’ll get to work fixing the ship. There’s nothing more to do for the moment. Sit back and relax while the next part of the story plays out.

Click here to proceed to Vella on the Bassinostra.