Vella is taken to what appears to be some kind of sky village called Meriloft. Be careful where you walk until you find the cloud shoes as you can fall through the clouds. Talk to the two guys in the center, Walt’r and his son Ch’t. They’ll give you a brief overview of what’s been going on and let you know about Jesse’s stolen egg. 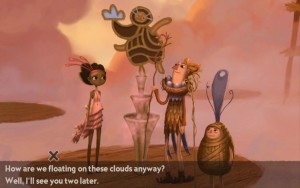 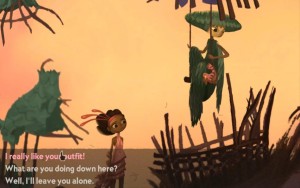 First we’ll get some cloud shoes so take the ladder down to the south and talk to the maiden who’s been left behind. She’ll give you some cloud shoes. Put them on so you don’t fall through the clouds.

Next go to the Cloud Shoes shop and talk to Car’l. You’ll startle her and she’ll drop her knife. Ask her to make you a pair of cloud shoes and she’ll say she can’t do anything without her knife.

Walk to the north near the nest with the egg in it and use the extendable ladder. You’ll climb up and grab the golden egg. You need three of these eggs to get off the island. Walk to the west of the island and talk to F’ther who asks you for an offering. Put your golden egg in one of the bowls of enlightening. You’ll be able to climb up the ladder now and talk to H’rmony Lightbeard. After chatting with him he’ll drop another golden egg. Climb down and put it in one of the bowls of enlightening. 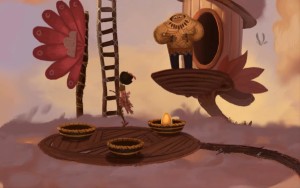 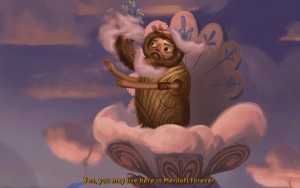 Head back to the central area and use the extendable ladder to get up to Jessie’s nest. Continue on to the east and you’ll come across a peach tree. Move past the peach tree and jump to one of the branches. You’ll knock a peach loose that will fall through the clouds. Move close to the tree and you’ll slide down. Head over to the west and you can grab the peach that fell down.

Head over to the east now and you’ll see Gus hanging from a tree. If you try to squeeze past Gus you’ll fall down. Climb the tree and fall down the hole just to the north east of the tree. You’ll land on Gus and fall off yourself.

When a bird places you back on the island climb down the tree again. This time you’ll be able to retrieve Jessie’s egg leaving the third golden egg free for you to grab. Take it and put it in the third bowl of enlightening. Try to climb the ladder and you’ll crash down to Shellmound.