Vella is sitting against a tree as her sister approaches. Follow her back to Vella’s house where her family are celebrating her role in the upcoming maidens feast. Go to the table and pick up the towel. Take a cupcake and bring it over to Grandpa and give it to him. Respond by saying “Split if with you?” Grandpa will split the cupcake and put the knife on the table which is your chance to grab it.

Talk with mom and when the dialogue finishes you and four other maidens will be ready for the arrival of Mog Chothra. 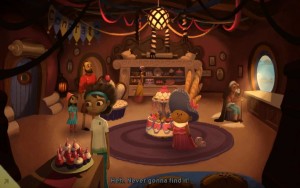 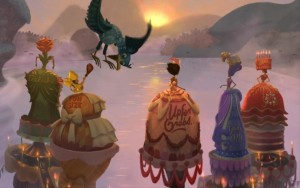 You can now trade the bottle of water with the maiden in yellow to your left. She’ll get wet so ask to trade again and give her your towel for the drumstick. As the bird dives down to grab the drumstick put your corset over it’s head. Use your knife on the cake dress to cut yourself free.

Vella is taken away to Meriloft so continue the story here.