It’s time to break out of the daily grind and find some real adventure. Get out of bed and open the present to reveal the Grabbin’ Garry Robot. Click on the air tank to grab the tank of compressed air. 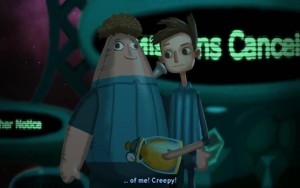 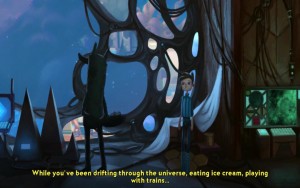 Once you’ve reached the Talon Nebula go back and talk to Marek. He’ll take you to the computer to rescue some creatures. Press the green button to lower the shields. The red button will lower the boom arm and grab the creatures. You’ll need to time it correctly.

Use the yellow controls to move the ship into position and grab another creature. Marek will tell you hostile forces are approaching and that there’s another distress call from Danger System 5. Marek will give you the Danger System 5 star chart. Give it to the space weaver and head back to Marke. You’ll have to rescue more creatures but this time the ship will lock you out of the controls.

To get going again you’ll need to find a way to hack into the boom arm controls, bring the shield down and override the space weaver’s nav scarf.

Head back through the vent down to Marek. He’ll give you the Prima Doom space chart and the Omicron inhibitor. Head through the space weavers room and take the door to the left and you’ll be in the central area of the ship. 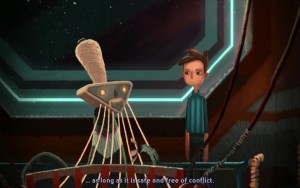 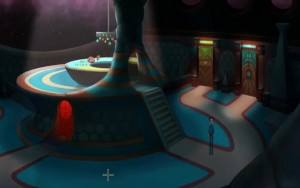 Take the door to the north and head towards the galley. Pick up the knife on the table. Go back to the central hall and you’ll see two doors on the right hand side. A green door and a blue door. Take the green door then go into the elevator on the far right to the Starboard Passageway.

After having travelled the elevator you’ll notice your head is a little bit smaller. Walk to the left and enter the second door to the room where you were given a hug attack. Walk down to where the little creature is moaning. Take the crotchet hook then head back into the hallway. Next head into the ice-cream room and grab the whipped-cream gun. 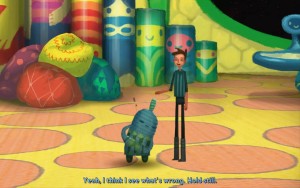 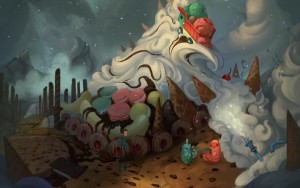 Walk all the way to the right and enter the airlock. Head to the north and you’ll be taken outside the ship. Use the tank of compressed air and put it on your helmet. Next use the knife to cut the air hose. Lastly take the whipped-cream gun and attach it to your suite. You’re now ready to jump. You’ll float close to the boom arm controls. Use the knife to open the security hatch and use Grabbin’ Gary to connect to the arm controls.

put the baby helmet on your head and head into the Containment Facility. Place the Omicron inhibitors on the Fusion Orb.

Lastly, head back to the space weaver. Look at the Prima Doom star chart. You’ll need to enter this manually into the nav scarf with your crotchet hook.

Head back to Marek for the last rescue mission. 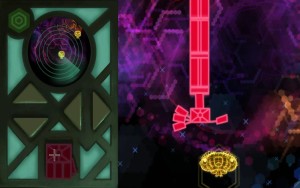 Continue on with Vella’s side of the story.