To the south of Porkrind’s Emporium you’ll find a boat where you can find Ribby and Croaks, the next contract on the list. These two frogs are much harder than the vegetables and the fight takes place over three phases.

During the first phase each frog will have it’s own attack. The smaller frog will throw glowing boxing gloves at you. Usually they go in order from high, middle to low. You can duck the first two and jump the last one. Some of them are pink and you can parry slap these ones. 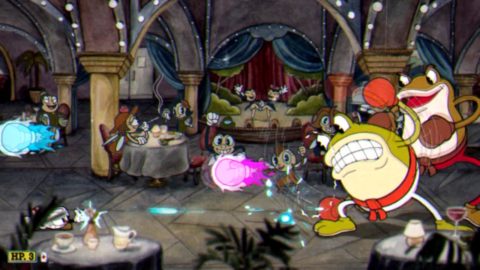 The taller frog will release flaming bees that will slowly make their way towards you. Shoot the bees and then focus your firepower on the two frogs. Once you’ve done enough damage the smaller frog will roll towards the left of the screen and phase 2 will begin.

You can’t damage the slot machine while its mouth is closed. Dodge the gold coins and then parry slap the pink machine arm to play slots. Depending on the result different platforms will come out of its mouth.

Next: Ruse of an Ooze