Ruse of an Ooze

This is a fun boss to fight as he jumps around like a large blueberry. Use dash to avoid his jumps and try to stay in the center of the screen. If you’re too close when he stretches out for a headbut duck underneath and keep on firing.

Goopy will grow in size for the second phase. It’s still fairly easy to avoid him, just watch out for when he bounces off the side of the screen. This time he’ll try to punch you when he stops. Once again duck to avoid the blow and continue firing until he changes form again.

Goopy has died but he’ll still attack you from beyond the grave. Keep moving and use dash when he tries to squash you. 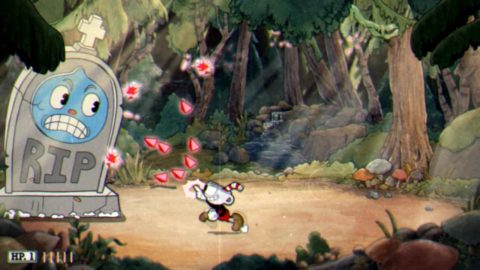 You’ll need to focus your fire on the little Goopy face at the top of the gravestone to do any damage. Before long the gravestone will crack and this boss will be defeated.