In the northern section of Inkwell Isle 1 you’ll find some Blueprints for learning how to fly a plane. Take the small tutorial first and make sure you’re familiar with the controls. Hilda Berg is a fairly tough opponent for the first world and will change forms many times.

In the first phase Hilda will shoot ‘HA’ signs at you and you’ll also be attacked by little aeroplanes shooting missles. Remember you can press your dash button to turn into a smaller plane and move more quickly. After a few shots she’ll charge at you and then transform.

The galloping bull will charge at you if you stay in front of it too long. Have a few shots and dodge out of the way until it transforms back into Hilda.

Just like the first phase Hilda will shoot ‘HA’ at you while you dodge bullets from the smaller planes. This time she has an extra tornado attack that she’ll send whirling towards you. Change into the small plane to dodge out of the way. When you’ve done enough damage she’ll charge at you and transform into the whirling sisters.

The sisters will whirl around but won’t attack you directly. Instead a flaming circle will appear that shoots out flaming bullets. Move around the flaming circle to avoid the bullets while continuing to shoot at the sisters. 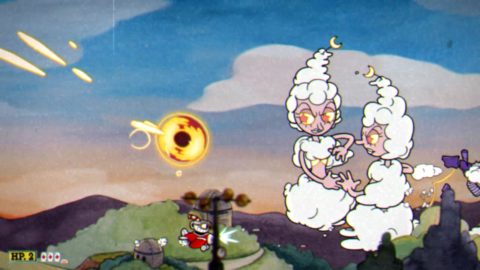 Phase 4: Return of the Hilda Plane

Once more Hilda will return to shoot ‘HA’ signs and tornados at you. Dodge them and continuing shooting.

Hilda transforms into a moon and shoots stars at you. UFOs also fly past at the top of the screen shooting laser beams downwards. The red UFOs will shoot beams behind you and the bronze UFOs will shoot beams in front of you. This is a good time to use your specials if you have them saved up. Once you complete this phase Hilda will be defeated.