Djimmy the Great is a boss on Inkwell Isle 2 and you’ll face him when you enter the Pyramid. You’ll fight this boss over 5 phases. Having the second weapon on the plane, the bombs, will make this boss fight easier.

Djimmy will stay on the right side of the screen and open his chest, making a number of items fly out at you. There are three variations to this attack. On top of this he will shoot out large smoke cups and faces that you’ll also need to dodge. 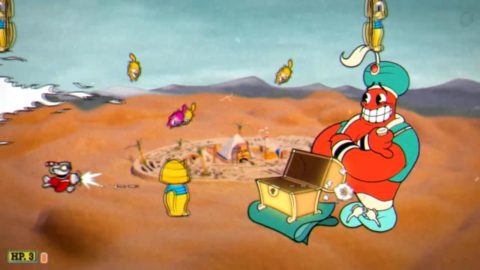 Swords – Blue and pink swords will fly ot at you, stop for a while, and continue to chase you. They’re fairly easy to dodge so keep moving and bombing Djimmy to get past this phase quickly.

Golden Cats – Cats will be released from the chest and they’ll open up, releasing more cats. Once again this attack is fairly easy to dodge.

Treasure – The most difficult of this phase. Djimmy will open the chest and treasure will fly at you. There are many little items you’ll need to dodge. Keep firing as you dodge and hopefully at the end of it you’ll proceed to phase 2.

Look for the faces on the pillars and shoot them to clear a path through this phase. Watch out for the spinning blades that move between the pillars. 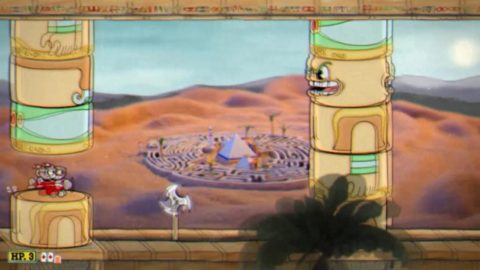 You can fly past the wooden pole that holds the blade, it’s just the blade itself that will damage you. Once you make it through 6 pillars you’ll proceed to the next phase.

There are two aspects to this attack. For a start little ghosts will fly at you, going from right to left. You can dodge or shoot them, and some of them will be pink so you can slap them. Djimmy will also shoot two eyes/planets that will bounce at you from the sarcophagus. 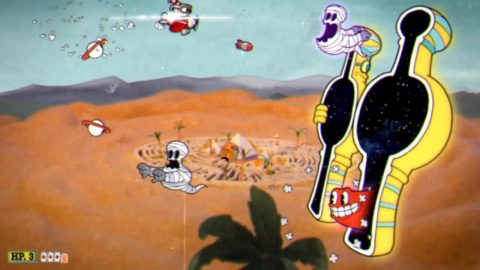 It’s easiest to hover around the top of the screen and shoot bombs down at Djimmy while you dodge the eyes and ghosts.

Djimmy will lift up a puppet that shoots at you from time to time. A hat will fly around and also releases bullets as it spins around. 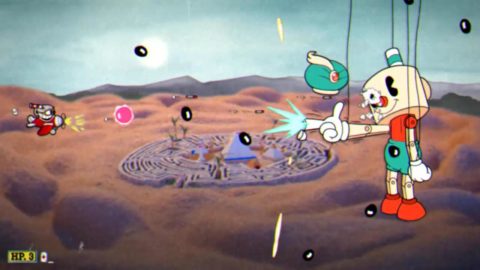 This phase isn’t too difficult. Just remember to use the dash button to go into small plane mode so you can fly faster and dodge those bullets a little easier.

Djimmy will return as a giant genie with 3 pyramids floating around. Djimmy will shoot a beam at you from his eyes at the same time that one of the pyramids creates a tear in the fabric of space. You’ll know what pyramid it is because it will open its eye. 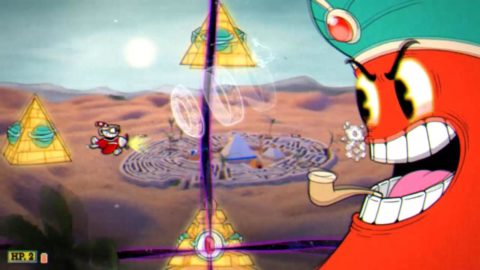 Dodging both of them at the same time is tricky but just remember that the pyramid only creates a tear left/right and up/down from it’s eye. If you stay in the diagonals you should easily avoid it. Keep shooting away until Djimmy has been defeated once and for all.