The evil Baroness Von Bon Bon is hiding away in her castle and will send out her candy minions before you even get a chance to shoot at her. There are 5 candy bosses but you’ll only need to defeat 3 of them before facing the Baroness herself. 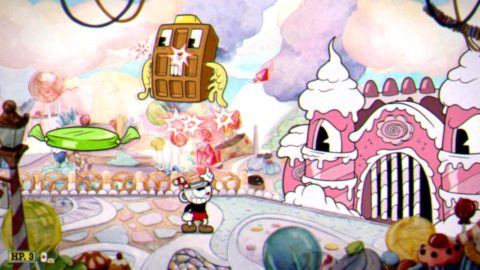 The Waffle boss will circle around slowly and explode from time to time, sending parts of himself out in all 8 directions. The parts of himself will then return to form the waffle again. Try to stay on the other side of the screen from him and dash under him when he gets close. 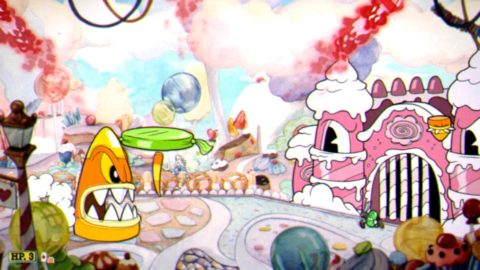 The Candy Corn boss is easy to defeat, especially if you have the blink ability. This boss will move in straight lines. First along the ground and then moving up to go across the top of the screen. Often he likes to move around in a figure 8 pattern. He’ll also release little candy corns that move up into the sky. The trick is to follow along behind him for as long as you can. If he gets in front of you just blink behind him. 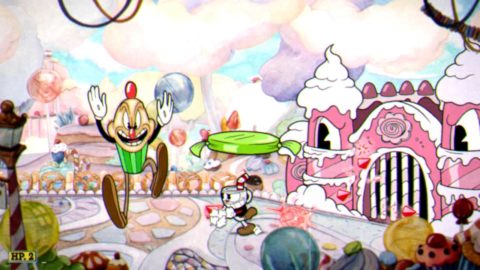 The cupcake is a difficult mini-boss to defeat, especially if he comes out second or third and you have other things to deal with. He’ll quickly jump into the air and splash down onto the ground. The splash damage will radiate outwards so you need to stay a fair distance away from the cupcake. The best way to deal with him is to stay on the ground as far away as possible. Dash or blink past him when he gets too close. 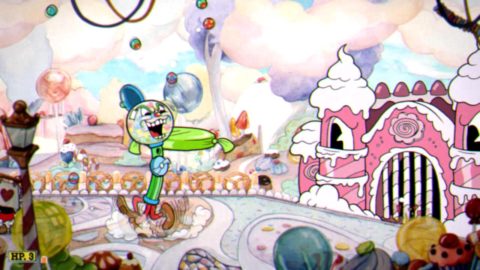 The gumball machine is probably the easiest mini-boss to defeat. He’ll run left and right but stay fairly close to the center of the screen. This means you can just position yourself on the far left side and continue shooting. As long as you dodge the gumballs that he throws out from the top of his head you’ll be fine. 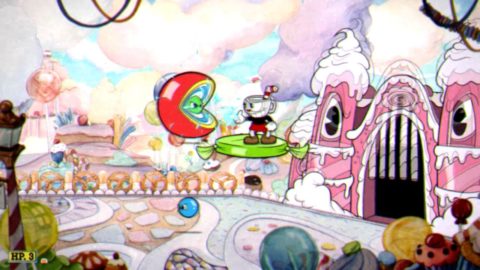 The Jawbreaker will follow you around wherever you go. Dash or jump away from it and get a few shots before dodging past it again. You can use the green lolly platform to run circles around it. You’ll also need to watch out for the smaller jawbreaker that follows along behind the larger one. 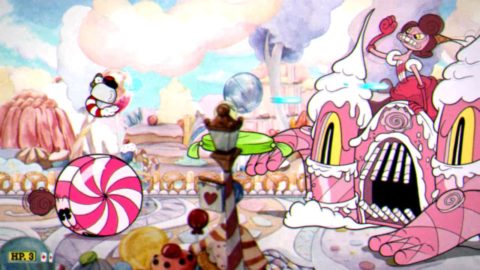 Once you’ve defeated 3 of the mini-bosses the castle will come alive and the Baroness will shoot out her head from the top. The head will follow you around 3 or 4 times by moving to your location. Stand on the lolly platform and shoot back at the Baroness to damage her. After a while pink mints will come rolling out of the castle. You can parry slap these for extra cards.

There’s a small glitch with the Baroness in that if you die your progress won’t be shown on the bar. It will always look like you’ve made no progress against her. Don’t worry, this is just a visual glitch, you are actually doing damage.