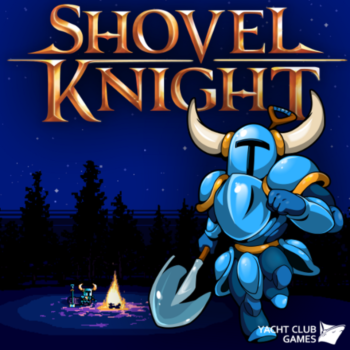 Shovel Knight is a 2D side-scrolling platformer by Yacht Club Games. Shovel Knight was out adventuring with his companion, the Shield Knight, when she disappeared in the Tower of Fate. Your quest is to rescue the Shield Knight. Along the way you’ll face many dangers, find precious treasure and battle many other knight before finally confronting the Enchantress.

There are many places to visit in Shovel Knight, including charming villages, castles and towers. This game features a vibrant soundtrack, secrets to uncover, collectibles, warm characters and terrific boss fights, all classically designed with a modern touch.

The controls are fairly simple and you’ll be shown which buttons you need to press when you unlock a new item. The levels have a checkpoint system. Some of them can be destroyed for gems but you’ll no longer be able to use it as a checkpoint. If you die you’ll drop three money bags. The amount of money you lose depends on how much you have. Make sure you collect your money bags before continuing on. If a bag falls down a pit you can use the fishing pole to retrieve it.

Plague of Shadows
Specter of Torment
King of Cards

Shovel Knight is a 2D side-scrolling platform adventure game by Yacht Club Games. It was released in June of 2014 and followed the hero in the Shovel of Hope campaign. Since then there have been two more expansions, Plague of Shadows and Specter of Torment, with a third, King of Cards, currently in development.