The Hall of Champions is an optional area. It’s guarded by a Ticketer who will charge you 5000 Gold for entrance. When you enter the Hall the door will close behind you, locking you in. You’ll find a few Patrons who are also trapped in the Hall, and ghosts will appear as you begin to explore.

Start by going up the ladder and then heading to the left. Walk all the way to the left and break the wall to find a Light Orb. You can shovel this close to the ghosts and it kill them with its explosion. It’s the only way to kill the ghosts. 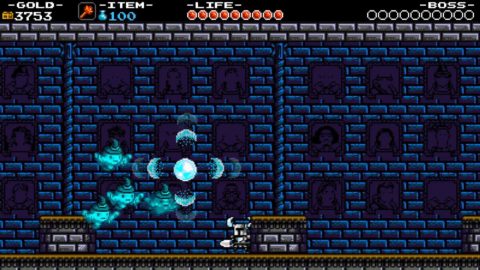 Once all the ghosts in an area have been killed the lights will turn on. Go up the ladder to the left and break the wall to the left for a secret. There’s a Patron hiding down here from the ghosts, as well as a Music Sheet and a chest with gems. The ledge has invisible gaps so you’ll need to carefully jump across. 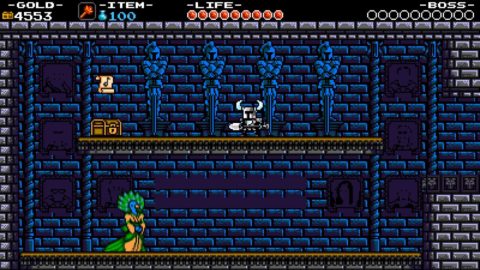 Go back to the right and clear out this area of ghosts. There’s a breakable wall in the center ledge. Hit it twice to clear out the underside of the ledge and spawn another ghost. Once all of the ghosts in this area have been killed the lights will turn on. Continue to the right.

A couple of Patrons are waiting here. This is where you’ll have the boss fight once you’ve cleared out the other areas. For now continue to the right.

Some of the ledges have gaps in them so be careful where you stand. Otherwise use the Light Orbs to kill the ghosts as you did for the other areas. 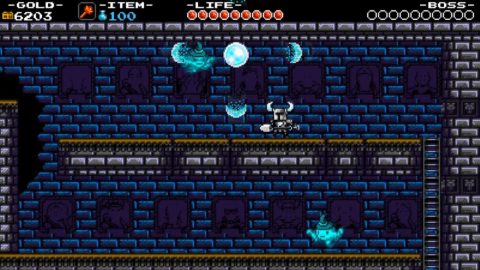 Take the ladder on the right side down. Kill the ghost and then break the wall to the right for the second Music Sheet. 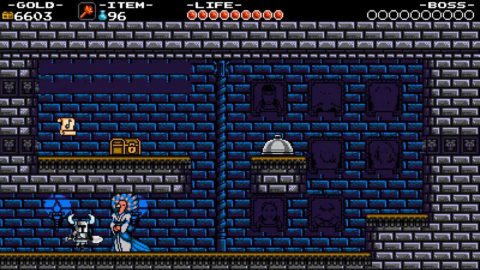 Go back around to the final section and clear it out of ghosts. You’ll need to do a loop around to get there as there’s a wall in the way from this side. Clear at the ghosts to turn on the lights and then head up the ladder to the center top for the boss fight. 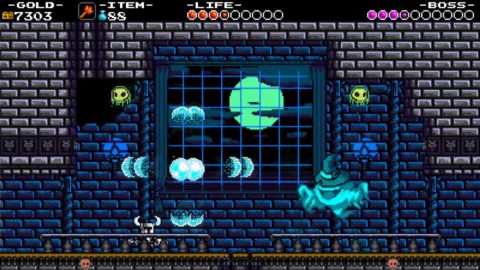 The Big Ghost can only be damaged by Light Orbs. He likes to float around at the top of the room making him difficult to hit. Every so often he’ll fly down and do loops, getting faster and faster. He also spawns little ghosts that can be killed with the Light Orbs.

When the Big Ghost is below half health he’ll spawn a couple of Skull Ghosts who’ll drop skulls on you. Avoid them while hitting the Light Orbs to finish off the Big Ghost. Once he’s been defeated the lights will turn on and you’ll be allowed to leave the Hall.