When you start the game you’ll immediately find yourself in The Plains. It’s an easy level to get you accustomed to some of the game mechanics. You can use your shovel to dig piles of dirt and find treasure. You can also use it to whack enemies. Push down once while jumping and you’ll perform a downard strike.

Make your way to the right, killing the bugs (Beetos) as you go for some extra treasure. You can downward strike off bubbles to reach areas you couldn’t ordinarily jump to.

You’ll come across a number of checkpoints on each level. If you die you’ll respawn at the previous checkpoint. Some checkpoints can be destroyed for extra treasure. If you do they can no longer be used as a checkpoint.

The first major enemy of The Plains is the Dozedrake. He’s a sleeping dragon but wakes up when you approach. It moves back and forth while spitting bubbles and can only be damaged if you hit it’s head. The best way to defeat it is to jump up and down on it’s head. 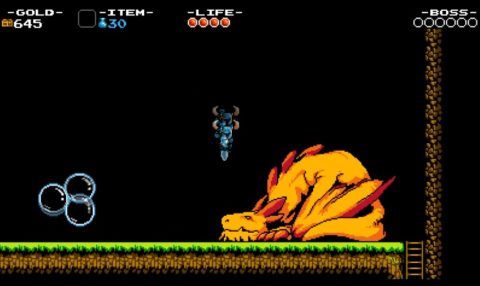 Make your way down the ladders. You’ll need to face a Skeleton and a few Slimes along the way. At the bottom with the spikes dig a tunnel to the left for the first Music Sheet. 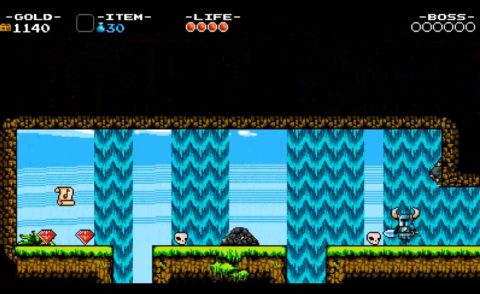 Make your way back to the right. Dig the wall at the top of the block mound for a secret gem. 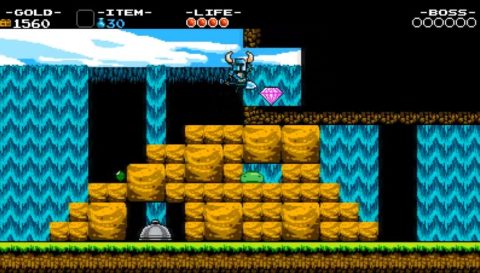 Break all the blocks for some food and a few extra gems. You’ll spend them later once you reach the Village. Just watch out for the Slime caught in the middle. 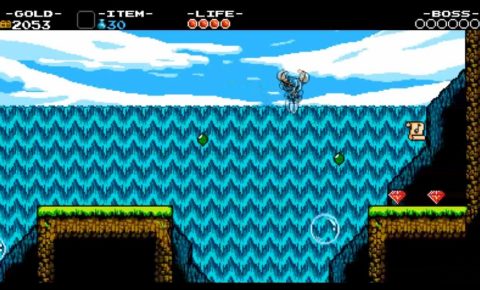 Now head back to the left and climb up the ladder. There are two secrets here. One immediately to the right which reveals a few gems and a Skeleton. And one above that which reveals a ladder that leads up to a Chest with more gems. 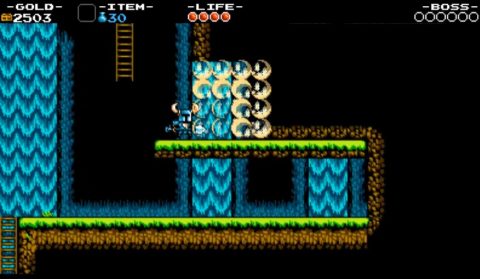 Now climb up the ladder and continue to the right. You’ll face another Dozedrake. Watch you don’t fall down the gap in the middle of the screen. Continue to the right and up another ladder. Use the down strike to destroy the blocks and then a regular strike to stop bouncing. There’s a red gem in an alcove to the left.

Drop down and take out the Slimes. There’s a secret with another gem on the left side. Once you’re done jump up to the ladder. Climb up and bounce across the Divedrake. Head to the left another Chest.

Make your way back to the right, past the last checkpoint, to the Black Knight. 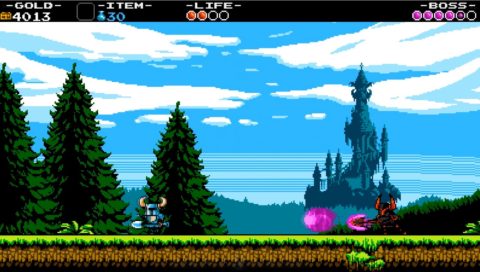 The Black Knight has a few attacks but if you’re patient can be defeated easily. He’s hard to defeat if you face him head on so attack with a downward strike or jump over him and quickly attack from behind.

The Black Knight has a regular strike, just like the Shovel Knight, a dive from above attack and a purple projectile attack. Move to the left or right to avoid the attacks from above. If you’re quick you can get in a strike of your own when he lands. The projectiles are slow so just jump over them. The Black Knight has 6 health (you’ll need to hit him 10 times to defeat him).

Once the Black Knight is defeated you’ll rest at a campfire and fall asleep. You’ll have a dream the Shield Knight is falling from the sky. Jump up to catch her before she hits the ground. When you wake up make sure you dig the campfire for some extra gems. Leave the screen and make your way to the Village.