The Lich Yard is the most difficult level so far. It’s an old abandoned village overrun with undead and the home of the Spectre Knight. You’ll find another two Music Sheets along the way, as well as the Phase Locket which makes you invincible for a couple of seconds.

There’s a few new mechanics on this level. Swipe the little bushes to make them float for a few seconds. You can then jump and do a downward strike to make it even higher. Some of the screens are dark and you can only see where you’re going when lightning flashes. 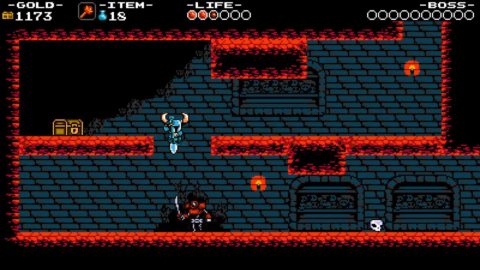 Drop back down and go to the right to face a giant skeleton. The best way to defeat him is wait for him to collapse and then jump on his head. 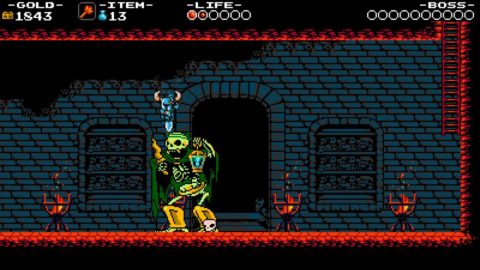 Hit the dinner plate to release a bomb which should blow up all of the skeletons. Break the wall to the right and go down the ladder. Jump across the gravestones to reach another chest. 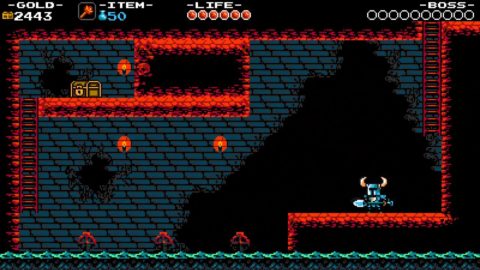 Head back up and use the two green bushes to do a double jump to the ledge on the left. The left green bush you’ll need to swipe twice. Jump along the ledges to the first Music Sheet. This area is mostly dark so be careful where you jump. 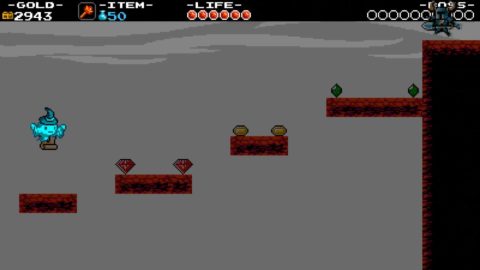 Drop down, bounce off a skeleton and head to the left. Open the chest to find Chester who wants to sell you a Phase Locket. Using it makes you invincible for a few seconds. 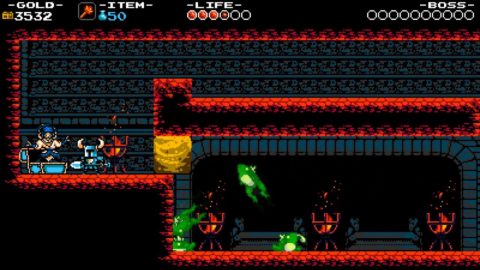 Head back to the right for the third checkpoint. There’s a chest under this ledge. To reach it you’ll need to knock the skeleton helmet onto the moving platform to make it descend. Inside is the second Music Sheet.

In the next room drop down the central gap. There’s a hidden gap in the floor that drops you down to the room below. Break the wall to the left for another chest. The Giant Skeleton will wake up. Jump on his head or duck into one of the gaps to avoid his jumping attacks.

Climb up the ladder for the next checkpoint and make your way across the dark area to the right. At the other end you’ll find the last checkpoint and the Spectre Knight. 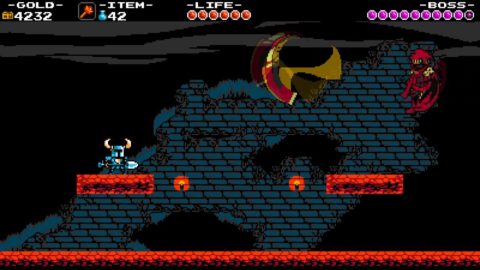 Once the Spectre has taken enough damage he’ll summon skeletons to help him. Once he’s only a few health points away from defeat he’ll make the room dark. This is a good time to use the Flare Wand and finish him off.