When you finish the three main levels for the second act the Black Knight will be wandering around again. Run into him for this encounter. The Black Knight has been imbued with more of the Enchantresses power for this battle so he’ll more difficult to defeat than last time. 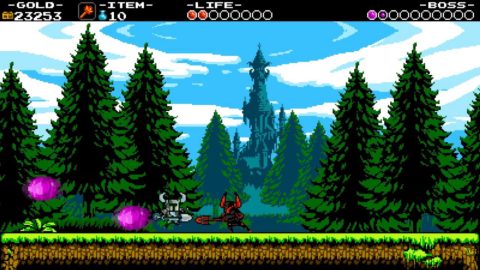 The Black Knight behaves in mostly the same way as last time with a few notable exceptions. He now has the ability to deflect back fireballs from the Flare Wand. He may be able to deflect some other attacks as well. He’ll also fire two pink fireballs at you instead of one. One will be high and the other low so you’ll need to duck one and jump the other.

The usual tactic of swiping down on him from above or jumping over him and attacking from behind still works well. Once he’s been defeated the path will be clear.