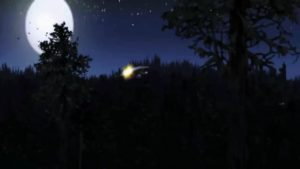 Kashyyyk is the home world of the Wookies. When selecting your team of course you’ll want to bring Zaalbar along. He’ll give you some extra information as you walk along.

The first thing that you’ll notice when you dock is that a Czerka Corporation representative will ask you to pay a fee to land here. There’s not really any way out of paying the 100 credits needed to get access to this planet unless you have Force Persuade or lie saying that you represent wealthy clients. You’ll only need to pay it once though and you can come back here as many times as you want.

Have a look around the Ebon Hawk to find some containers with various items in them that you can nab before following the path down to the east. You’ll need security skill to open them.

Along the way Zaalbar will open up about what happened to him 20 years ago when he was exiled from his village.

Continue down the path past Eli and Matton to the gate to the Great Walkway. You’ll be met by a couple of Czerka guards but they won’t stop you going through the gate. In this area there are Forest Kinrath. A nasty breed of giant spiders. There are 3 Kinrath just as you enter the Great Walkway.

Just past the Kinrath you’ll find 3 Czerka employees by the body of a dead Wookie. You can persuade them to leave their post otherwise you may need to fight them. Just beyond are more Kinrath and a Mykal, a dinosaur-like bird.

Head south down the Great Walkway, past the Wookie Guard and then north until you come across 3 Dark Jedi. These three are pretty tough and they’ll use their dark powers against you. 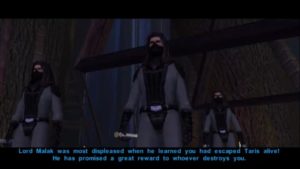 Just past the Dark Jedi you’ll come to a Wookie guarding the village of Rwookrrorro. He’ll take you into custsody to see Chuundar. He’ll take Zaalbar prisoner and tell you to explore the Shadowlands to find a rogue wookie.

Head back up to the Great Walkway and then south to the Wookie Guard. As you approach you’ll find some Wookies fighting the Kinrath. Help them win the battle and then continue to the guard called Gorwooken who will let you down to the Upper Shadowlands in a basket.

As you descend to the Upper Shadowlands you’ll be attacked by Calo Nord and some Wookie Thugs. It’s a tough battle. Use your shields to prevent Calo’s blaster fire and take out the Wookie Thugs first. You can then concentrate all your firepower on Calo to hopefully defeat him once and for all.

Keep heading north and take out the Katarn in the forest. Soon you’ll come across Jolee in battle with four of the beasts. Have a chat with him after the fight and follow him to his camp.

Jolee wants you to remove the Czerka camp just north east of his home. Make your way to the camp and speak with Commander Dern. He’s pretty adamant that he wants to stay. You can make a few extra credits by selling him some Tach glands but it’s hardly worth it.

To get the group to leave without fighting them speak with the guards one by one and persuade them to turn off the emitters. Once enough of them are turned off the group will be forced to leave. Convincing three of the guards to turn off their emitters will be enough to send the group away.

Head back to Jolee and let him know of your success and he will join your group.

With Jolee and one other character as part of your team head to the eastern part of the Upper Shadowlands where you’ll find the Czerka Repulsor Field. Jolee is the only one who can shut it down. 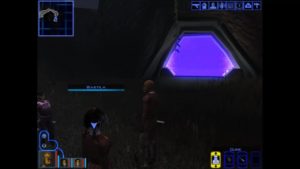 On the other side of the repulsor field you’ll enter the Lower Shadowlands. To the very south of the map you’ll find a hologram. Speak with it and it will give you a test to determine if you have the personality profile for accessing the Star Map.

In order pass the test you need to answer all of the questions as if you are a dark jedi. Take care of yourself and spare no-one. If you answer all the questions wrongly you will gain light side points. If you fail the test you’ll have to fight two Defense Droids. Once you get past their shields it shouldn’t be too tough of a fight.

Win the fight to gain access to the Star Map. 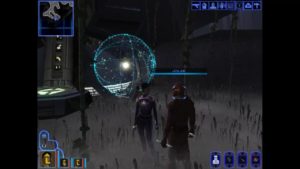 The only way to challenge Chuundar’s leadership is if a relative brings back the blade of Bacca. It was apparently lost in the Lower Shadowlands. When you are into the Shadowlands hug the paths to the east as you make your way south and you’ll come across Freyyr, the father of Zaalbar and Chuundar. He will attack you after a short exchange but surrender once his health is done to about one third.

Freyyr asks you to find Bacca’s Blade so he can take it back to his people. It’s stuck in the hide of a great beast. To lure out this beast you’ll need the body of a Viper Kinrath. Kill the Kinrath to the south and take one of the bodies to use as bait.

Keep heading to the south until you find the Ritual Marker. Near there you’ll find a dangling vine. Click on the vine to interact with it and choose to tie the Viper Kinrath body to the vine.  This will draw out the Ritual Beast. 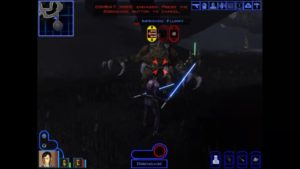 With three of you he shouldn’t be too hard to take down. Kill him and take back Bacca’s Blade to Freyyr. He leaves and tells you to met him in Chuundar’s throne room.

When you’re ready head back up basket area. Gorwooken and a few wookies will attack. Kill them and make your way up the basket back to the tree tops. A wookie up the on the path will take you to see Chuundar. You can try the peaceful solution if you like. I choose to fight and killed Chuundar and his gang. Freyyr was restored to his leadership and Zaalbar was given the Blade of Bacca.

Head back to the docking area, taking out any remaining Czerka guards and then make your way to Tatooine. 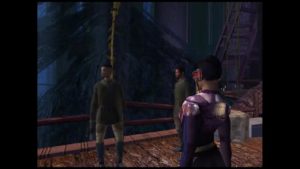 Just to the east of the docking area you’ll come across Eli Gand and Matton Dasol. Matton owed Eli for some purchases but apparently his ship and friends left the planet without him. Matton is stuck here working for Eli until the debt is repayed.

In the Upper Shadowlands, just south of Jolee’s hut you’ll come across a Broken Droid that will replay the dialogue between Eli and Matton’s crewmates. Eli killed them and then took Matton hostage. Head back to Eli and Matton with the droid’s head before you complete all the main quests down in the Shadowlands otherwise they will leave before you have a chance to confront them.

If you’re following the light side tell Eli to run away. Matton has the opportunity to take over Eli’s shop as well.

If you bring Mission with you in your party she’ll be spotted by Lena, the girl who was dating Mission’s brother back on Taris. Things are pretty tense between Lena and Mission but she does tell you that Griff planned on working int he Czerka Corp mines on Tatooine.

Speak to Woorwill and Jaarak in the village and they’ll tell you about a lost wookie, Rorworr. You’ll find Rorworr’s corpse just before the Czerka camp. Unfortunately he’s been killed but appears to have been working with the Czerka Corporation.

Go back to Woorwill and Jaarak and show them the bolt casing. They will tell you to go to the law makers house. Head to Worrroznor’s house to talk to him. Tell him about the bolt casing proving Rorworr is guilty. Jaarak wants to take the blame but don’t let him. You’ll receive light side points and 400 credits.

Hidden Hunters – Mandalorian in the Shadows

Not long after entering the Lower Shadowlands, past the repulsor field, you’ll come across a Wookie fighting heavily armoured Mandalorians. His name is Grrrwahrr and he asks you to find the rest of the Mandalorians. They will only come out of hiding if you put your weapons away.

One of the Mandalorians will drop a Swoop Bike Signal Device. Take this back to the swoop bikes and use it on the bike that’s missing the signal device. This will alert the Mandalorian Commander and he won’t be happy about your interference.

This will be a tough battle so you might want to buff yourself before the fight. Return to the north to Grrrwahrr and tell him the Mandalorians have been defeated.