After finding the Star Forge the Ebon Hawk will crash land on a Mystery Planet. You’ll need to discover the source of the crash and disable the power source as well as find spare parts to repair the Ebon Hawk.

Walk to the east and you’ll be attacked by a group of Rakatan Warriors. Continue along the path to the north and go to the North Beach.

The Rakaton will take you to see ‘the One’, the leader of the tribe. He wants you to kill all the Elders and bring him the secret knowledge the Elders are hiding from them. Just go along with the plan for now. You can loot all the Wicker Footlockers in this settlement for extra supplies but that’s all you can do here for now. 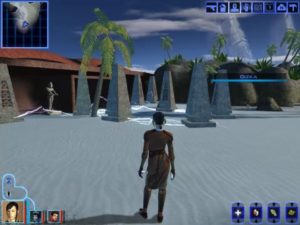 Enter through the pillars in the center to avoid the electricity which will kill your entire party instantly. You’ll be met by an Elder who will question. Don’t tell him you are from the Rakata or he’ll kill you instantly. Say that you come seeking the Star Forge and he’ll recognize you as Revan and let you in.

You’ll speak to the leader of the Elders and he’ll agree to help you if you prove that you have changed your ways. He wants you to rescue the hostages taken by the Rakatan. Have a look around the Elder Settlement and when you’re done head back along the path to the east.

Along the way you’ll see some debris and mines. Disable the mines and behind them you’ll find the Ship Parts you’ve been looking for. Run all the way back to North Beach to find the Rakatan. Unfortunately they will attack you on site and there’s quite a lot of them, including a couple of Rancor.

Once they’ve been taken out head inside the settlement and battle the One. He’ll release four Rancor to fit along side him. Take them all out and speak with the hostage inside one of the Rancor cells. You’ll also find more Ship Parts in one of the cells.

Go back to the Elders in the south and they will agree to help you, showing you the way to get past the barrier in the temple entrance.

Tell the Elders when you are ready to enter the Temple. They will perform a chant. Remove all the members from your group as you need to go alone and speak with the Elder Guide. As they are chanting Jolee and Juhani will approach and say they won’t let you go in alone. Persuade the Elders to let them come along.

Enter the temple and note the Massive Doors to the east won’t open. They lead to the Temple Summit. There are paths leading to the north and south. It doesn’t really matter which path you take as long as you work your way to the east side of the Temple. In one of the northern rooms you’ll meet a Sith Master who will present a fair challenge for your group.

Both the north and south sections will have a computer where you can download a map of the temple. Enter the East Guard Post and go through the door down into the Catacombs.

In a footlocker in the room to the south-west you’ll find a Datapad. It gives you the clue for getting past the Sequence tiles on the floor to the north. You’ll need to step on them in the shape of a ‘H’ which didn’t really work for me but if you just make it so all the orange tiles are turned to white. Stepping on a tile will change the tile you step on and the ones next to it.

Go through the door and use the Rakatan Computer. The main thing that happens when you use the computer is that it recognizes you and will allow you access through the Massive Doors in the west. You can also get data on the Rakata that you can give to the Elders to help them recover their genetic code.

Go back up to the ground floor of the temple and enter the Massive Doors. The corridor beyond the West Guard Post will lead up to the Temple Summit.

Head outside and meet Bastila. This is a defining moment in the game where you will choose which path you will take. If you try to reason with Bastila you will fight her and then she will run off back to the Star Forge. If you turn to the dark side you’ll have to try to convince the rest of your crew to turn to the dark side as well. Carth and Mission will refuse.

After Bastila leaves the Temple Summit use the Rakatan Computer and shut down the Planetary Disruptor Field and the Temple Energy Shield.

Run back to the Elder Settlement and speak with Researcher LL’awa. Tell him you’ve found data on the genetic structure of the species. You’ll gain 1000 xp.

Head back to the Ebon Hawk and go to the Engine Room. Click on the Hyper Drive to fix it. The ship is now ready to leave. Go to the cockpit and select the Star Forge as the destination one last time.