Once you’ve found the third Star Map, regardless what planets you found them on, when you try to leave the planet you’ll be captured by the Leviathan. 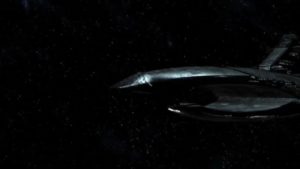 Before being captured you’ll need to work a plan of escape. Choose one of your characters to perform the escape. It can’t be Bastila, Carth or yourself. I chose Mission as she has good Security skill.

After the questioning you’ll take control of your selected character. Mission will swipe the keycard from the guard and let herself out. Talk to the guy in the cell opposite and he’ll give you an ICE Breaker to override the Sith Security.

If you let the three out in the next cell along they’ll attack you. Head west, north and west in the room. Kill the technicians and use console. Use the ICE Breaker to get access and 99 spikes for this level. Use the system commands. Upload the area schematics and open the Detention Area.

Walk to the west and use the Detention Terminal. Unlock the aft holding cells and equipment storage to set everyone free. Check the lockers for your equipment. From here head all the way to the east to the elevator.

Use the elevator and go to the bridge. There is tons of loot on the Leviathan so make sure to check all of the footlockers and lockers. Make your way to the center Barracks. A Sith will drop a Datapad showing a bounty on you and Bastila.

Walk around to the south and then east up the ramp to the Bridge. Once you enter you’ll have some brief dialogue before being thrown into an epic battle with Elite Sith, Dark Jedi and Saul, the Admiral of the Leviathan.

Once the bad guys have been defeated slice into the computer and Open Docking Bay Doors. Run all the way back to the elevator to the west and go down to the Hangar.

Head all the way to the west where you’ll see the Ebon Hawk docked down below. Go around to try and get down to the Ebon Hawk and you’ll be stopped by Darth Malak. 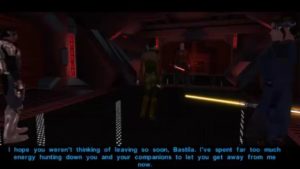 Your two companions will be stunned and you’ll be forced to fight Malak alone. He should go down pretty easily but he’ll run before you get a chance to kill him. Malak is hiding in the center section. Open the door and face him again. Once again he should be fairly easy to defeat. Bastila and Carth will come to your aid and Bastila will get trapped in a section with Malak.

Run to the east and go to the Hangar to escape  the Leviathan. Shoot down the fighters that attack and make your way to the last planet, in this case it’s Korriban.