You’ll have another dream on your way to Manaan, showing the location of the Star Map. Once you land you’ll be asked to pay another docking fee of 100 credits. You can persuade your way out of paying the fee if you have the skill. 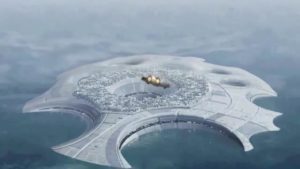 Manaan is an interesting planet with both Sith and Republican bases. Two of them are arguing as you leave the docking bay. The local race, the Selkath, are selling them a special plant with healing properties and they have to put up with each other or risk losing their trading agreements.

You’ll find the Republic Base in the East Central Courtyard. Talk to Roland at the reception desk. He seems to know something about the Star Map but is unwilling to help you unless you do something for him. He wants you to recover a droid that was taken by the Sith. There are three ways to enter the Sith Base, interrogating the prisoner, decrypting the passcard and raiding the landing bay. If you have good persuade/force persuade skills you may find it easiest to talk with the prisoner.

Go into the doors behind Roland and you’ll see the prisoner. The passcards are in the next room, the computer room. Speak first with the Intelligence Officer and he’ll tell you what things are important to the prisoner. 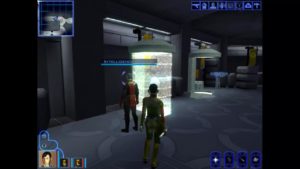 Speak with the Sith prisoner and see if you can ‘persuade’ him to tell you the password. Use all of the dialogue options that you learnt from the Intelligence Officer. If you are successful he will crack and tell you the Sith passcode to the Sith Base which is ‘zeta 245698 alpha’.

While you’re in the Republic base you may want to slice into the computer system for more information on the Sunry trial quest.

Head to Ahto East and go to the entrance to the Sith base. A Sith diplomat will be there. Show him your passcard, if that’s the path you chose, and he’ll let you in. Once inside your cover will be blown and you’ll have to fight. The Sith should be no match for you. There’s a door up ahead and a door to the east. The door to the east will take you to the Flow Control room.  You can actually bypass the Flow Control room as there’s another way around to the other side.

Take the door north and then head towards the west. You’ll find a room with a broken droid belonging to the Republic. Have a look at it and take the Data Module. 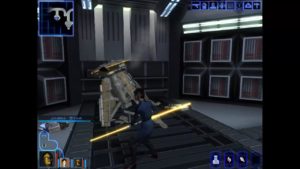 Walk all the way to the west to the West Lounge and take out the Assault Droids and Sith Heavy Trooper. Head north into the North Computer Room. Run to the door on the other side of the corridor. You’ll take damage getting through the mist but hopefully you’ll survive.

Take a look at the computer console and Disable Force Field. This will allow you to get to the other side. You can now go back the way you came and then north through the disabled force field. As you continue to the north you’ll come across the Training Annex with the missing Selkath from the Selkath Mystery side quest.

Past the training area you’ll meet a Dark Jedi Master with some Selkath assistants. It’s a tough battle but the three of you should be able to handle it. Continue into the next room and grab the Datapad from the trapped chest. It gives details about how the Sith have been trying to turn young Selkath to the Dark Side of the force.

When you leave the Sith Base you’ll be placed under arrest. Tell the Selkath Bwa’lass that you don’t need an arbiter. Here’s how to get through the Selkath Trial.

The trial will end and you’ll be free to go. Head back to the Republic Base in East Central.

Take the submersible down to Hrakert Station. Open the door and you’ll meet someone who tells you the Selkath have gone crazy. Continue down the hallway to the east and you’ll find a console that will allow you to download the area schematics.

Head first to the Envirosuit Storage to grab an Environmental Suit and then go to the central Airlock. Make sure you check the chests along the way and pick up a Sonic Emitter. You’ll need it to kill the Firaxa sharks in the water outside. Use the Pressure door and go outside.

Make your way to the west and speak with the Survivor. Follow him out to the ocean floor. Walk to the east and use the Sonic Emitter to kill the Firaxa sharks when they get too close. To the east are two pressure doors that both lead into the same building. Enter one of them.

Follow the corridor around to the north and you’ll be trapped inside a chamber and the pressure is going to be released. Use the console to abort the depressurization. Speak with the two people on the other side of the force field. They’ll give you two options for defeating the giant Firaxa shark, use poison or destroy the harvester.

Continue north and go out another pressure door to the ocean floor. Walk east to the Kolto Control Panel. You can use it to either feed toxin into the vents (dark side points), or use the tank pressure controls.

Tank Pressure Controls – Here are the steps needed to get the container to 4 million sangen of pressure and make it explode.

The container now has 4 million sangen pressure and will explode. The giant Firaxan shark will be happy and allow you access to the Star Map to the east.

Once again the Selkath will detect the explosion and take you in for questioning. Go with them peacefully and tell them about the research station and the giant Firaxan shark. You’ll be free to go. Finish any side quests and then make your way to the next planet.

Head out of the docking area and follow the passage along to the right. You came across a Selkath called Nubassa. He’s interested in collecting all kinds of life forms. 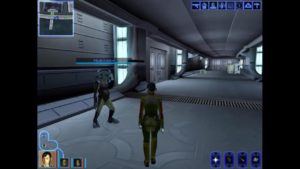 Tell him that you have gizka for sale. If you persuade him he’ll take them off your hands for you.

When you head into the West Courtyard take Jolee with you. You’ll meet a lady called Elora whose husband, Sunry, has been captured by the Selkath and accused of murdering a Sith warrior.

Go to the Selkath court which is in the south-west section of the West Courtyard. Speak with Judge Shelkar and tell him you want to investigate the murder case involving Sunry. You’ll be appointed as the Arbiter. You can now ask the judges about what they think about the case. Go back and speak to Sunry about everything you can. He’ll deny having anything to do with the murder.

Go to the East Central Courtyard and enter the hotel across from the Republic Base. Speak with everyone here and ask them about Sunry and Elassa.

Slice into the computer system in the computer room of the Republic Base for a hidden recording showing Sunry killing Elassa. It seems Sunry was lying but do you want to bring this up in court? Go back to Sunry and he’ll confess but beg you not to let anyone know in order to save the Republic’s relations with the Selkath.

You’ll find the Swoop Race registration in the Ahto East. It’s the same as the other planets. Practice the track first until you feel confident. It’ll cost you 20 credits for a practice run. When you are ready for the races you’ll receive 300, 600 and 800 credits respectively and become the Manaan swoop race champion!

The Selkath youth seem to be disappearing and a Selkath, called Shaelas, in the mercenary area in the northern part of the West Courtyard asks you to investigate their disappearances.

You’ll complete this quest when you get into the Sith Base. There you’ll find Shasa and the Selkath youth who are learning the ways of the dark side of the force. Convince them that the Sith are evil by bringing them the pin of one of their friends who was killed by the Sith in one of the rooms in this area.

They’ll agree to leave the Sith base and go back to their families. You’ll get light side points for turning them from the dark side. Return to Shaelas for your reward.

If you follow the dark side visit Hulas in the East Central area of Ahto City. Remove your other team members and speak with him alone. He is a member of a secret group for the Genoharadan. They assisinate people which they claim is for good reason but it’s debatable. If you decide to do the assassinations you’ll be rewarded quite well but will also score dark side points.

Go to the mercenary recruitment area in the north section of the West Courtyard where you’ll meet a Selkath called Nilko Bwaas. He’s trying to investigate why the Republic are hiring so many mercenaries. All he wants is information. Once you have been on the submersible to the Hrakert Station and returned you’ll be able to let Nilko what’s been going on. He’ll give you 500 credits for a reward.

Once you’ve collected three Star Maps and try to leave the planet you’re on you’ll be captured by Saul in the Leviathan.