Objectives: Find a way to break into the Cathedral and then find the key to the vault hidden somewhere inside before making your way through the Catacombs to the Vault.

You begin the level sliding down a ramp into a large room with lots of metal platforms. Quickly jump and roll so that you’re sliding down backwards and grab onto the side of the ramp.

Let go and grab the crevice slightly lower down. Shimmy across to the left and pull up into the crawlway. Drop down the other side. Climb up the small block behind you and then jump up to grab the roof on the right. Monkey swing over the spikes to the Power-up Crystal on the other side.

Make your way back to the crawlway and drop down the other side into the large room. Climb onto the tan block on the left side of the dome, just in front of the ramp you slid down.

Walk to the right side and jump up to the higher platform. Turn to the left and jump up once more for some Uzi Clips. Drop back down and then drop down again to the platform with one sloped side.

Jump up to grab onto the bottom of the grating above and monkey swing over the railing to another block. Take a standing jump to grab onto the small passage and climb inside. There’s a Small Medipak in the crawlway and a Power-Up Crystal in the hole on the other side. 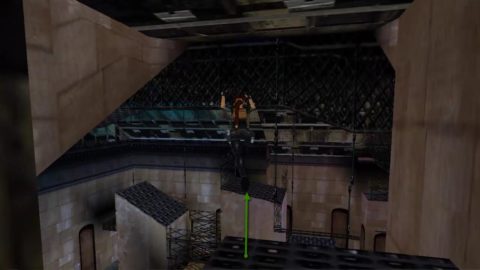 Take a running jump to the top of the right pillar. Make sure you have full health as there’s a big drop into the cathedral. Turn left and jump up to grab the grating. Monkey swing over the railing and drop down on the sloped top of the other pillar. You’ll slide backwards and land on a breakable tile which will drop you down into the cathedral. 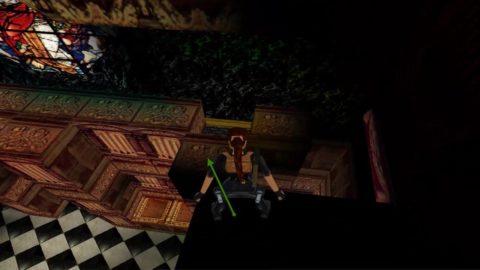 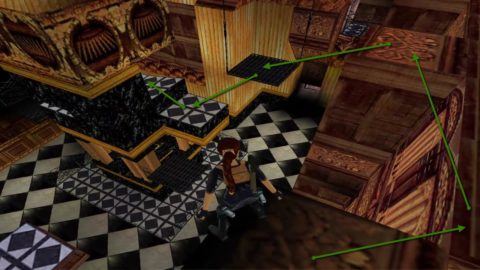 Walk forwards as far as you can, turn right and then take a running jump to grab the crevice in the wall. Travers across to the left and then pull up. Grab the Large Medipak and pull the Switch to open a door on the ground level.

Run over to the wall opposite the switch. Climb up the bookshelf and drop off onto the ledge on the left for a Small Medipak. 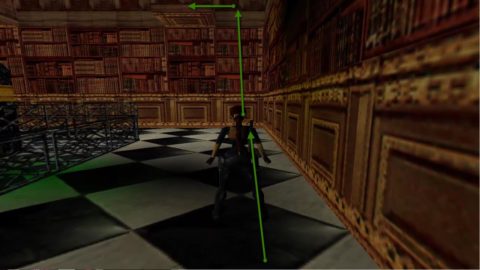 Safety drop down to the floor and run to the left corner to the door that you opened with the switch. Run over the breakable tiles and pull another Switch. This one closes a trapdoor, allowing you to monkey swing across.

Jump forwards and grab onto the grating above the spikes so that you can traverse across. As you come out to the large library climb up the first wall on the left and drop onto the closest ledge. Jump up to pull up onto a walkway above and then climb into a passage on the left for yet another Switch. Pull it to open a trapdoor leading to the exit.

From the end of this passage take a standing jump to grab onto the grating above. Monkey swing to the left all the way to the end. Drop and grab the platform. Pull up and crawl onto it. Turn around 180 degrees and climb up the grating on the wall. Inside this tunnel you’ll find the Vault Key.

Drop back down and climb up to the Zip Line. Use the zip line to slide down to the cement walkway below. Make sure you let go before the end or Lara will slide into a pit of spikes.

Walk to the front of the cement ledge and take a standing jump to the left to grab onto the small crawlway. 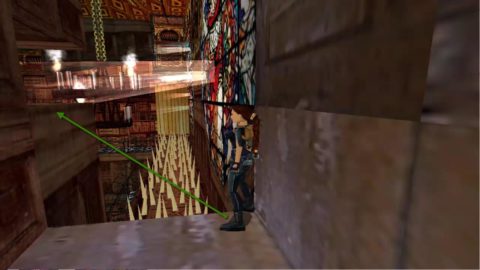 Drop down on the other side and enter through the secret bookshelf that opens up as you drop down. Safely drop down the blocks and follow the tunnel around to a pit of spikes with a steam vent at the end. You can monkey swing across but will most likely get set on fire at the end. Pick up the Small Medipak here first and make sure you’re on full health before proceeding.

Monkey swing across on either the left or right side. As you pass the first steam vent and get caught on fire make sure you’ve passed the last spike and drop down into the water below. Follow the tunnel to the left and swim under the crusher.

Run forwards and crawl through the tunnel ahead. Push a Button here that opens a trapdoor in the main room. Above the crawlway you came through you can pull up into a small alcove for another Small Medipak.

Drop down and return through the crawlway the way you came. When you can stand up turn left and climb up the grating on the left to the top.

The gold block is a trapdoor that will fall away as you stand on it. Walk close to it and then take a standing jump with action to make it to the other side.

Turn to the left and climb up the wooden blocks at the end of the ledge on the right. Drop into the hole that you just opened with the button. After a long drop Lara will fall into a pool of water.

Climb out and look for the door with the lock next to it. The fencing blocking off the short passage to the right of the door can be shot, allowing you to grab the Flares behind it. Now use the Vault Key on the lock and go through the door.

In the far left corner you’ll find a Large Medipak. Now run to the other side and drop into the water. Follow the tunnel down and take the first right just before the corpse. Take another right and then go left just past the two corpses to find a Power-up Crystal.

Go back past the two corpses and continue forwards until you can pull up out of the water. Kill the Dog and the Guard, the only two enemies on this level.

Climb up the grating to the right of the barrel and enter the vault with lots of goodies on the floor to end the level and complete the game!