Objectives: Find the kayak and then paddle down the river to the level exit.

Walk forwards and a flock of bats will fly out from under an alcove to the left. As you continue forwards a Poison Breathing Lizard will attack from the far corner. Another Lizard will attack from around the same area as you move forwards. With the lizards dead climb up the hole in the alcove where the bats flew out from. Pick up the Small Medipak, Uzi Clips and Grenades. There is a shortcut if you drop down the trapdoor in this room but you’ll miss a secret. Instead drop down the hole you came from and run around to the left side of the pillar overlooking the gorge.

Drop down onto the flat block ahead and then drop down twice to the blocks to the left. Take a step back and then take a standing jump to the flat block in the middle of the raging river. Take a running jump to grab onto the edge of the other side. Shimmy across to the left, let go and grab onto the lower ledge. Pull up into the crevice and crawl through to the other side. Run across the corner to the Power-up Crystal and press the Button to open the trapdoor. 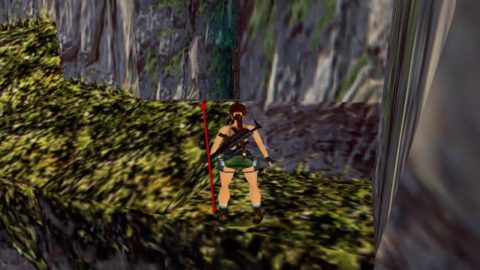 Forget the first alcove on the left and drop down the hole opposite the wooden gate. Turn to the right and hop backwards to grab onto the edge. Let go and backflip while you’re sliding down to jump over the spikes. Drop down into the dark passage and light a flare if you want.

Turn to the right and crawl into the passage one step to trigger a Lizard. Pull out and kill the lizard. If it poisons you don’t worry about it as there’s a power-up crystal just ahead. Crawl through the passage, climb up the blocks and run over the wooden bridge. Follow the passage around to the right and drop down onto the green ledge. Walk to the end and take a standing jump to the ledge with the Power-up Crystal. 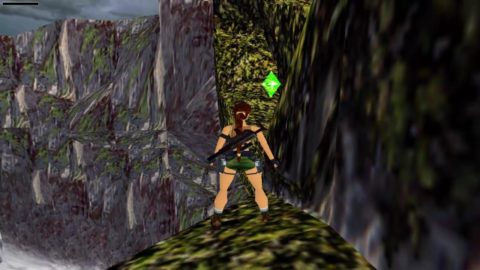 Turn around to face the ledge you came from and kill another Lizard. Jump back, run over the bridge and crawl back through the crawlway. This time turn right to face the sloped block. Jump up the sloped blocks and run up the stairs to the left, taking out a Lizard along the way. Drop down to the left and push the Button which opens the wooden gate you passed earlier. 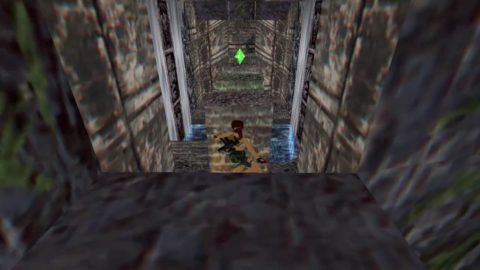 Climb up into the passage and pick up the Small Medipak on the left. Turn around and head the other way, dodging the poisoned darts and sliding down to the bottom.

Turn left and jump up to grab the rock ceiling. Monkey swing to the other side, drop down and run across the wooden bridge to the right for a Power-up Crystal.

Grab the ceiling again and monkey swing back to where you began. Don’t drop down, instead go around in a U shape and continue climbing along as far as you can, past the waterfall, before dropping down.

Climb up the block on the right and crawl through the passage to the other side. Turn left and take a standing jump to the climbable rock. 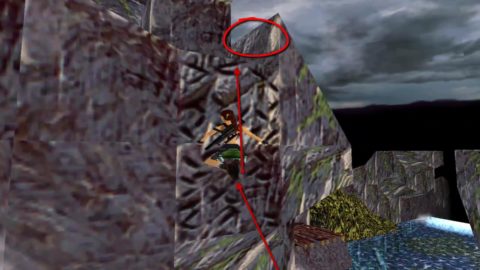 Climb up to the top and position Lara so that her back is towards the triangular-shaped rock, circled above. Walk 5 or 6 steps forwards and take a backflip to land on the other side of the rock. Grab on as you slide backwards, shimmy across to the right and drop down onto the wooden platform for Secret #2.

Make your way back to the wooden platfrom and stand at the back of the platform, facing the waterfalls. Take a running jump to the lower rock ledge ahead and to the right. You’ll need to be careful that you don’t bump your head on the rock outcropping above but you can jump slightly to the left and then curve towards the rock ledge in midair. 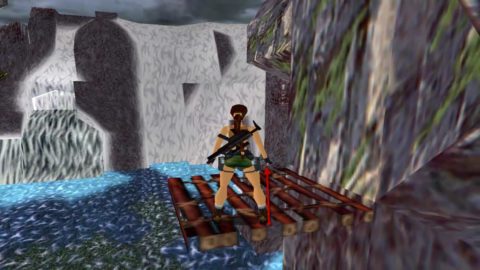 Jump up the rock to the right. Turn right and take a running jump over to the climbable wall. Climb up to the top and this time enter the cave on the left. You’ll come to a pool with a Kayak.

Kill the 2 Crocodiles and then drop into the water to pull the Underwater Lever just under the entrance. This opens the gate leading to the rapids. Hop onto the Kayak and paddle out through the gate.

Slide down the rapids into a large pool. Paddle over the next falls. There’s a rock in the center so take either the left or right path. The left path has a red tripwire with falling blocks just beyond it. Hold your ground until the rocks fall in front of you before proceeding. 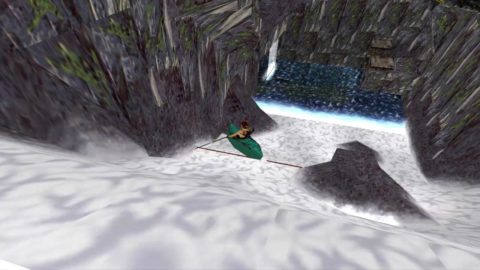 When you get down the bottom paddle to the left through the green tripwire to turn off the slicing blades. Now paddle to the right down some more rapids. Follow the path around until you reach another red tripwire. There’s a sharp drop, followed by spikes and slicing blades. Lara can get through it but you’ll need to use a medpak or 2 to keep her alive. 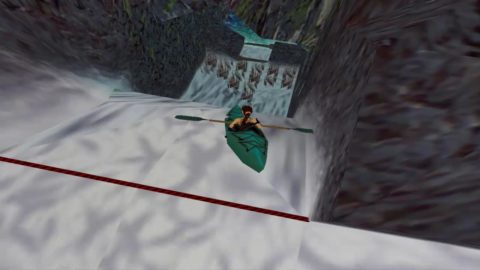 Drop down another waterfall into a relatively quiet pool. Turn to the left and you’ll see Secret #3 hidden in a cave. It’s a little tricky to keep the kayak straight while entering the cave but inside you’ll find a Power-Up Crystal. 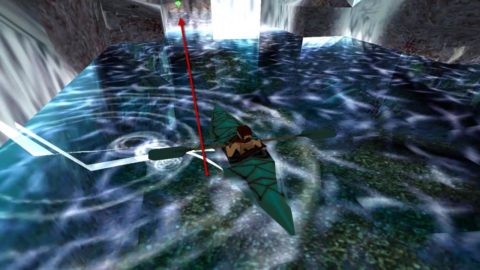 Now turn around and follow the river through a cavern. You’ll come to a part of the cavern with what looks like a plug and ladder in the center. From here you want to paddle up the rapids in the far left corner. 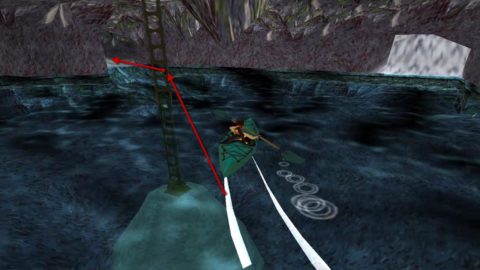 Follow the rapids around to the left to another quiet pool with a Crocodile. Hop out and shoot the Lizard that runs at you.

Walk up the steps and drop down to the right where you can look over the pool with the plug. Take a jump forwards to grab onto the ceiling and monkey swing forwards, around to the right and then the left. You’ll come to two fire-breathing statues. Position yourself as close as possible and then swing past each one just as the fire is about to stop.

Monkey swing as far as you can and then drop down onto the block on the left. Take a running jump to the platform on the other side of the water and then go into the tunnel. Pick up the Rocket or the Rocket Launcher if you don’t have one already.

Climb up the blocks on the left and drop down the other end to another pool. Turn right and jump across the ledges towards the waterfall. 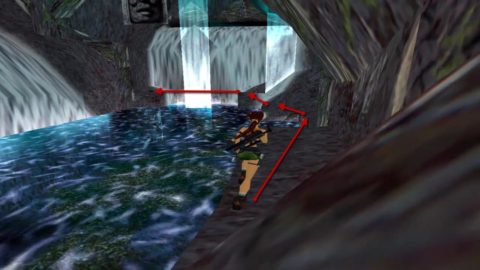 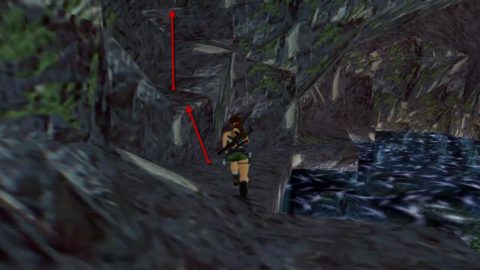 Turn left and run along the rock ledge to the end. Take a running jump across the water the block near the spikes. 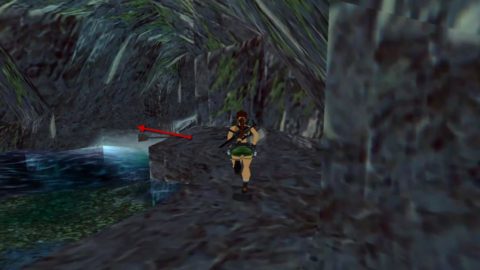 Turn around and take a running jump to grab onto the climbable wall. Climb up the wall and over to the left, to the top of the waterfall. Drop down on the second sloped block on the left. The first one is too slippery to stand on.

Run into the tunnel on the left and drop backwards down the hole. Climb down the wall to the bottom. Turn around, sprint and duck down behind the ledge before the boulder crushes you. 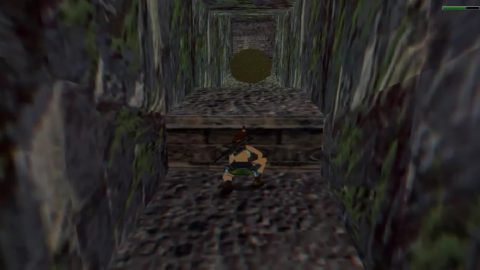 Sprint to the next ledge and duck down once more. Climb up, sprint across the bridge and take a running jump to the passage on the far left before another boulder crushes you.

Take a standing jump over the steam vents and then duck behind yet another ledge to avoid the fourth boulder. Climb up the block at the end and take a running jump to the block on the right side of the river.

The next jump is too far to make so grab onto the climbable wall and grapple your way across to the left. Drop onto the ledge at the end and climb through the crawlway.

If you want another Power-Up Crystal hop backwards and dangle Lara over the left side to trip the green tripwire. Pull up and you’ll notice a Power-Up Crystal that you can jump to further downstream. Otherwise take the zipline into the building.

Drop down into the building and climb up the wall on the other side. A Lizard attacks from the right side. Around the left is a Switch. Use it to pull the plug from the pool below.

Run back to the center and follow the passage opposite where you climbed up the wall. As you follow it a light will turn on at the end of the passage and you’ll be attacked by a Lizard. Drop down to the right and slide down to the pool below where you left the Kayak.

Hop back onto the Kayak and take it back down the rapids to the pool with the plug. There’s now a whirlpool here. Carefully drop down to the pool below. Get out of the Kayak and pull up onto the ledge. Shoot the Crocodile, dive under and pull the Underwater Lever under the ledge. Another 2 Crocodiles emerge. Either kill them or just pull up and go through the gate for the level exit.

Next Level: Temple of Puna