Objective: Defeat the mutated Willard by reclaiming the 4 artifacts. Climb out of the meteorite cavern and then make your escape by hijacking a nearby helicopter.

You begin this level in the midst of battle with Willard the Giant Spider. There is a donut shaped walkway in the center with 4 arms leading out to each of the artifacts. You’ll need to stay within the white lines or Willard will shoot at you. When he shoots its an instant kill so stay in the center unless he’s stunned.

Begin by running away from Willard and selecting one of your guns. The Rocket Launcher, MP5 or Desert Eagle Pistol are all good choices. You’ll need 10 Desert Eagle shots to stun Willard, or about 50 MP5 rounds or 4 Rocket blasts.

Once Willard has been stunned you’ll have a few seconds to sprint into one of the caves and collect one of the Artifacts. Sprint back out as quickly as you can and continue running around the center.

Continue this process for all 4 Artifacts. Once you have them all the meteorite in the center will lower and Willard will lose his special powers. Continue shooting him and this time instead of stunning him he will explode.

Make your way over to the side that has the 2 ladders. Take a running jump to grab one of the ladders and climb up until you’re in line with the ledge. Move closer to the ledge and then pull up. Continue forwards into the cave and left down the snowy passage. 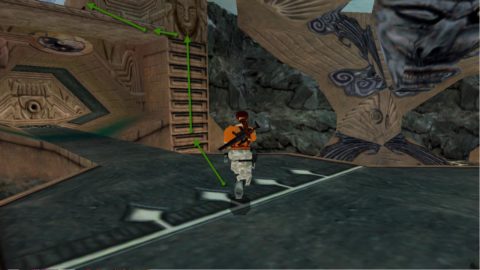 Follow the passage until you come out overlooking the cavern. Turn to the left, jump up to grab the ice ceiling and monkey swing across to drop onto the rock outcropping. Walk to the end of the rock, turn diagonally to the right and take a running jump to the flat rock ledge.

Turn to the right and jump up to the higher snow-covered ledge. Walk to the end of the ledge and turn diagonally to the right. If you look higher up you’ll see a light on a block outside the cavern. Take a running jump to land on the rock ledge just below and climb up to the top of the cavern.

Run to the left and slide down a snow slide. Continue through the passage until you come to some buildings. Take out the Guard to the left and the Guard ahead of you. Walk forwards and flip backwards when you see a light between the buildings. This is a Guard with Flamer. Continue forwards, taking out another Guard and Flamer on the other side of the open fence.

Turn left just before the fence and make your way between the buildings. Continue forwards to a fence with a gate. Wait until the helicopter lands and the gate will open automatically. Run through the gate towards the helicopter to complete the level.

Next Level: All Hallows