When the cut scene ends and you get control of Lara go straight ahead and to the left for the first Bronze Statue (1/10). Turn around and take a running jump across the stone bridge.

Run forwards and to the left. The river is on your left and across from it, on your right, you’ll find the second Bronze Statue (2/10). 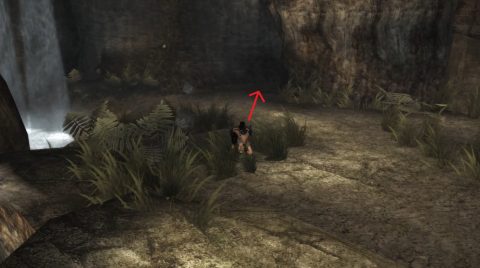 Turn around, dive into the pool and get out the other side. Climb up the wall to the higher ledge. Zip will ask you to check your PDA. You can press Tab at any time to open your PDA.

Press E (Interact) to grab the rock and push it forwards so it falls off the cliff. Jump across and climb up the vine on the right. You can press E in time with Lara’s movements to make her climb faster.

Jump across to the vine to the right and jump again to the rock ledge. Take a running jump across to the next vine and turn to the left. Swing into the dark cave. You can turn On/Off your light by pressing Delete. Run through the cave and pick up the Silver Statue (1/5) along the way. 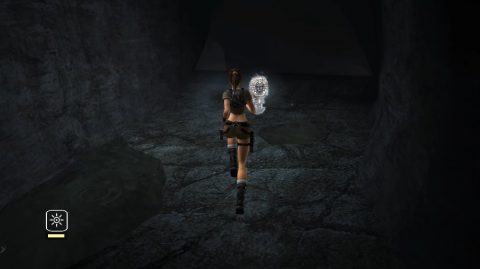 Drop down to the tunnel ahead and continue along to the left. When you exit the cave jump to the rock ledge ahead. You’ll see a small cut-scene showing you the path you need to take.

Grab onto the crevice and climb along to the left. Once again you can press E to climb faster. Jump across to the river and run across it to the left side. Wait for the boulder to come rolling down and then continue up the river. 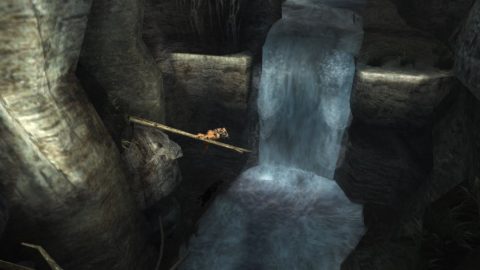 There’s not enough room to get up here so jump over to the ledge on the right side. After the small cut-scene take out the Mercenary. Run around to the left and you’ll see Bronze Statue (3/10).

Turn around, jump onto the rock and then onto the fallen tree trunk. From here you should be able to jump and grab onto the rock ledge. Pull up, jump over the big rock and push it onto the tree trunk. This will lift up the other side of the trunk, giving you a branch you can swing from.

Swing from the branch onto the the rock between the waterfalls and pull up. Continue forwards and use the grapple (Q) to latch onto the metallic disk. Then press E to pull it away.

Head through the gap and fight off another 2 Mercenaries. Use the rocks in the river to jump up to the ledge in the structure ahead. Shimmy across to the left. A part of the ledge will crumble but if you press E as you’re climbing you should be fast enough to make it across.

Jump back to the metal pole behind you and across to the crevice in the square column. Make your way around to the left and jump across to grab the handhold. Jump up to the platform above and climb up.

Turn around and take a running jump to the dangling vine. Shift around to the left slightly and take a few swings. Jump forwards to the hole in the wall behind the waterfall for Bronze Statue (4/10). 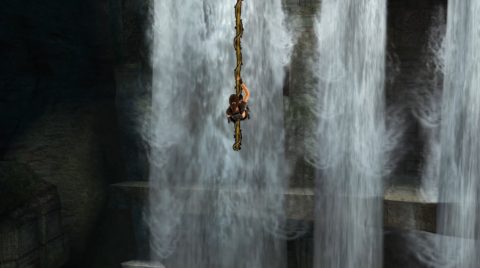 Drop off the edge. Lara will automatically grab hold of edge. Drop down, run around the waterfall and take a jump to the metal pole protruding from the statues mouth. Jump to the next one and then the path ahead.

As you round the next corner watch out for a Mercenary. If you try to roll out of the way you might fall off the edge of the cliff. Once he’s been dealt with jump across the chasm and press jump again to use your grapple to swing across. Just up on the left you’ll notice Bronze Statue (5/10). Use your grapple to latch onto it and E to collect it. 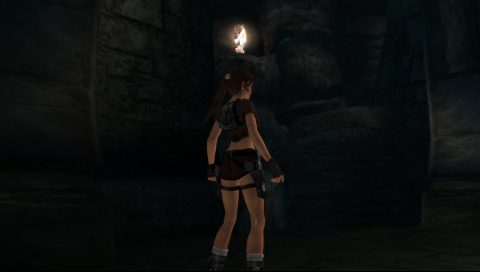 Continue along the path until Lara stops to admire the ruins. Unfortunately more Mercenaries have arrived.

Shoot the boulders on the side of the hill by pressing E. They should crush two of the Mercenaries below. Slide down the hill and pick up Bronze Statue (6/10) just ahead and to the right.

Turn around and take out another 2 Mercenaries from a ledge slightly higher up. The Mercenaries here might drop either the Assault Rifle or SMG. You can only have 3 Health Packs at a time so if they drop a Health Pack and you already have three you might as well use one.

Climb up the rock wall to the path above and run along until you see Bronze Statue (7/10) down below. Drop down and pick it up. 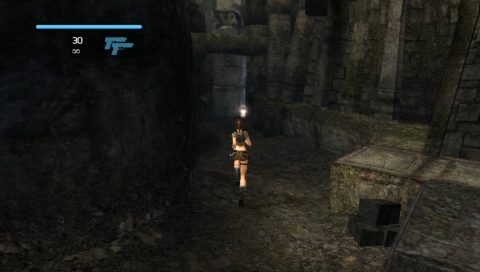 This is where you’ll face most of the Mercenaries. You can interact with the pillar on the left to shoot it so it falls over and it may take out one or two of the Mercenaries. There are 6 Mercenaries in total so keep moving or hide behind any of the low walls. This is a good place to practice your combat skills as you’ll be facing many more enemies in the future. 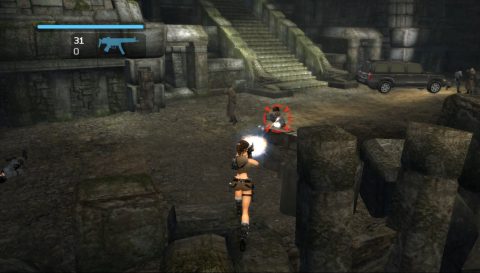 Pick up any weapon you like and as much ammo as you can find. Face the stairs and climb up the stone ledges on the left. Shoot the brick to break it and then pick up the Silver Statue (2/10). 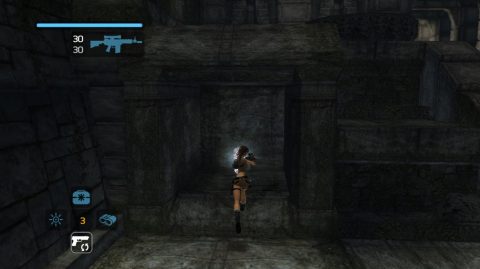 Jump over to the stairs and walk up them for another cut-scene. Two of the Mercenaries will enter the ruins and fall into a trap.

Run along the corridor and kick the box to trigger the trap. Swing across the gap with the grapple. On the other side turn left for a brief detour to grab Bronze Statue (8/10) and then continue on your way.

The next room has two chains with weights. Climb up the one on the right and then jump across to the chain on the left. Climb as high as you can and then jump into the gap in the wall.

Run through the passage and jump across to another chain. Slide down, turn around and follow the passage to a pool. Dive in and first swim to the right. Pull up to a small ledge with Bronze Statue (9/10).

Dive back in and follow the path ahead and slightly to the right until you can pull up. Head down the stairs and take out the Jaguar.

Carefully run forwards but stop in front of the stone block trap. Wait for them to close shot and as they’re opening again quickly run or roll through to the other side.

The next trap has two of these stone block traps next to each other. Grab the cage and push it into the first trap. You can now climb over the cage and roll/run through the second trap. 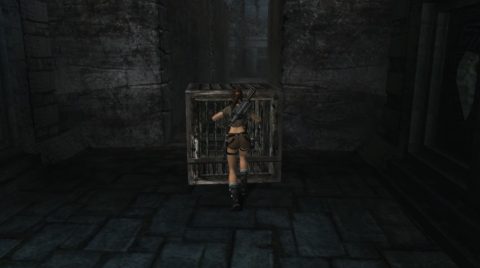 Head up the stairs on the right and continue forwards to a large puzzle room with 3 pressure plates, 2 gears and a door at the far end.

Before you do anything climb into the last alcove on the right for the final Bronze Statue (10/10). There is a Jaguar on the ground floor so either drop down and take it out or walk to the edge of the walkway and shoot him with pistols from up here.

You’ll get a small cut-scene here but the door won’t open because the left gear is still locked in place. Move Lara over to stand on the left pressure plate to unlock the gear. Now the door ahead will completely open.

To reach the gold statue you need to leave the door open only halfway. Because of the cut-scene you can’t step off the pressure plate in time. Reset the door by pushing the cage off the central pressure plate. Stand on the left plate again to lower the door.

Now push the cage back onto the central button. Stand on the left button for a few seconds until the crevice in the door and the wall are lined up and then jump off. 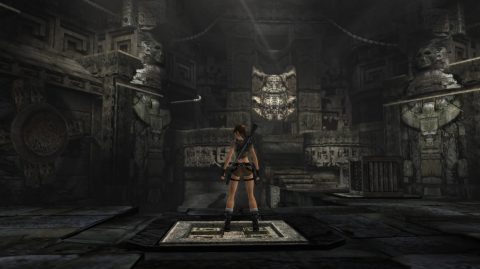 Climb into the alcove on the left side of the room and jump across to the vertical chain that should be going up and down slightly. Climb up and then jump forwards to the handhold. Climb around to the right, jump up and pull up to the highest ledge. Jump up to grab the chain and monkey swing across to the other side. 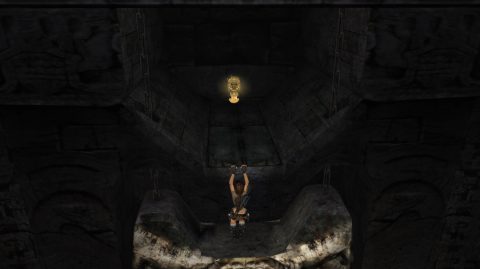 Jump up to the ledge above and pull up for Gold Statue (1/1). Drop all the way down to the platform below. Turn away from the door and run to the left side. Jump across to grab the handhold on the side of the stone wall. Climb around to the right as far as you can and jump up. Pull up and swing across the chain for Silver Statue (3/5). 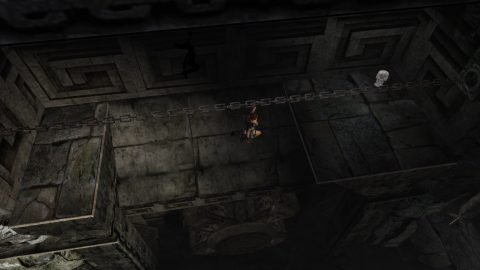 Make your way back across the chain and climb back around to the platform with the door. Run under the door and it will close shut behind you. Lara will run down the corridor automatically but you’ll need to press the right keys for the Quick Time Event. The keys are Down and then Up. You’ll notice a silver statue below you as you jump. You’ll pick that up in a minute.

Make your way to the end of the corridor and then drop off the edge. Shimmy across to the right and then drop down to the floor below.

Take out the Jaguar and then push forwards the grey colored block in the wall on the right (below the corridor where you came in). 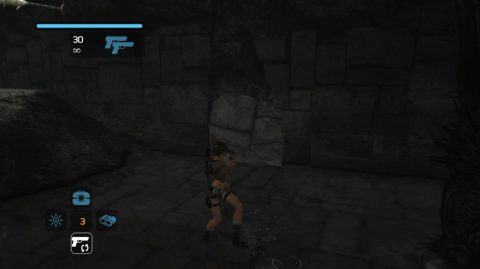 Enter the tunnel and run around to the right for Silver Statue (4/5). Come back out and climb up to the ledge on the right.

You’ll need to make a series of jump across the “clotheslines” to the wall by the door. As long as you line up the first jump correctly there’s only one way to go. Stone on the raised platform and turn to the left, so that you’re facing towards the secret passage where you found the silver statue.

Climb across to the right and then jump across the gap where the exit is. Jump backwards to another line. It will turn and put you in the perfect position to jump to the ledge with the Silver Statue (5/5). 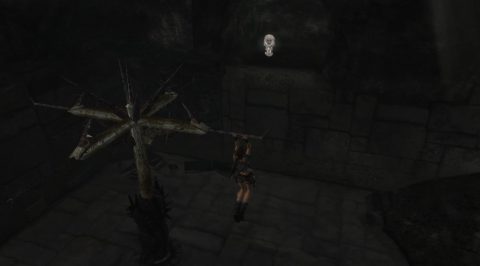 Jump back to the line and then to the wall once more. If you miss the jump you’ll need to start the jumps from the beginning again.

From the crevice in the wall climb to the right and jump up. Climb right and up again. Jump over to the left and climb around to the passage. Climb up the wall ahead and make your way around the corridor until you reach the outside area.

After the cut-scene you’ll need to make a couple of jumps to make it over the bridge before the helicopter gets you. On the central island you’ll face 8 Mercenaries but it’s fairly easy to hide behind the standing stones while you reload your ammo. Take them out one-by-one and use any Health Packs you need if you take a few shots. Once the last Mercenary has been defeated the level will end automatically.