As soon as the cut-scene finishes you’ll be in the middle of a big fight with about 6 Guards. During the battle another 5 or 6 will use the zip lines to drop in. Luckily you can take them out fairly easy with Excalibur.

Make sure you SAVE your game before fighting the guards. Some of them drop health packs which will be useful for the final boss fight. If you LOAD your game after you’ve defeated them the health packs will have disappeared.

Once you’ve defeated all of the guards Amanda will try to stop you. She’ll use her amulet to meld with the dragon. She will shoot energy blasts at you but you have Excalibur to shoot green blasts back at her. 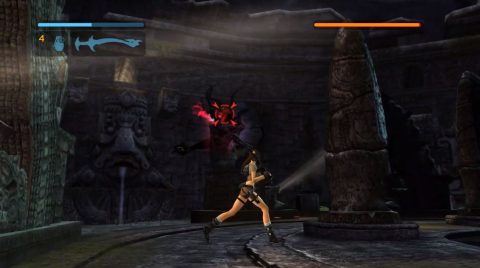 When the dragon is down to about half health it will drop to the ground. In the center of dragon you’ll see Amanda. Quickly run up to her and attack. The dragon will rise up again and regenerate some of its health.

You’ll need to repeat this process four times. When you do it for the last time the dragon will be gone for good. If you get low on health pick up the Health Packs dotted around the place from the guards you killed earlier. This is why it’s important to save the game before killing the guards.