Chapter 5: Is That All There Is

Is That All There Is

Walk all the way to the right until you reach the door. Jump off the door onto the controller and then jump up to lasso the camera. Swing up to lasso the light and then over to the roof of the building.

Jump down the other side of the building onto the forklift. You can control the forklift by pulling the lever to make the tongs go up and down or stepping on the button to move it forwards or backwards. Place one Yarny on the tongs and then position the forklift with the other so that the first Yarny can grab Spark #1. 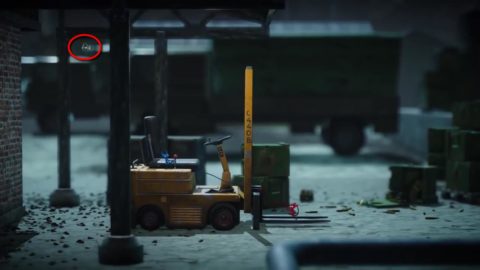 Move the forklift to the right side and jump over to the roof of the other building. Avoid the dark energy creatures and make your way to the right. You’ll need to jump off the side of the vent to make it over the group of 3 creatures.

Jump up between the pipes and tank and then down the other side. You’ll need to time your jumps to avoid the dark creatures.

Jump down the other side, up the steps and into the vent. Lasso the bottom of the first vent and swing up to the right. Make your way around the vents to the top. 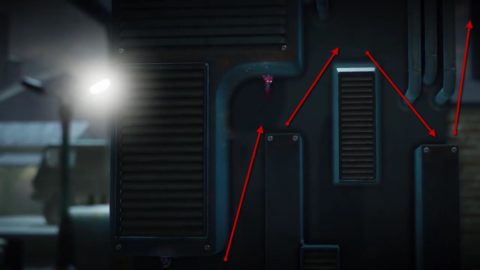 Follow the Wisp up between the brick wall and the metal pipe. You’ll need to time your jumps to avoid the steam. Up the top place one Yarny on the button to lift up the pipes so that the other Yarny can jump across them. 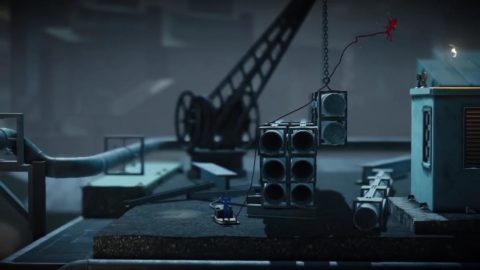 Bring the other Yarny up as well. Drop down and swing around and up between the tanks. 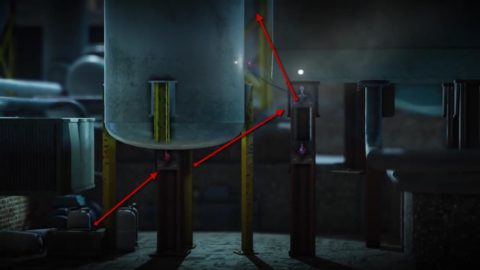 Stand on the pistons so that you’ll be propelled upwards. The second one should lift you high enough to lasso an attach point. Swing around between the pipes and follow the spark down and around, avoiding the flames. Lasso the attach point at the bottom and swing up to go up the right side. The Wisp will show you the way.

When you come to the motor have one Yarny stand on the left side of it and the other Yarny dangle from the right side. The second Yarny should be able to swing up to the right side. 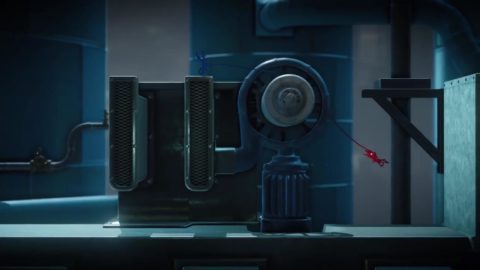 Pull the other Yarny up and swing around the pipes, following the Wisp. 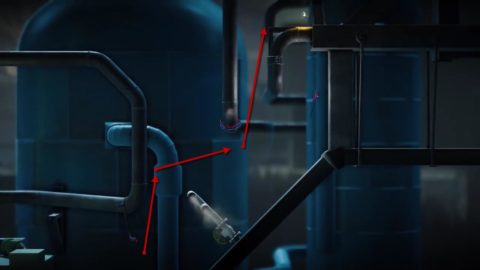 Make your way up the next couple of attach points until you see another motor. Jump up between the air filters to the left. Jump one Yarny over the motor and swing him up to the Wisp. 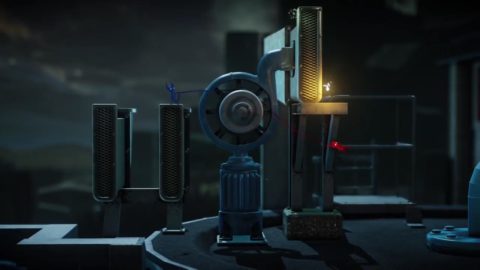 Now jump the other Yarny over the motor and swing him up to the highest lasso point. From here swing over to the filter to the left and drop down to grab Spark #2.

Swing back to the top attach point and pull the other Yarny up. Head to the right and follow the Wisp over the roof top and down the ladder.

When you get to the heaters drop one Yarny off the edge on the left side. Swing him over to the button. Pressing on it lowers the bridge so both Yarnys can get across. Don’t drop the other down. Instead bring the Yarny up and follow the more dangerous top path so you can pick up Spark #3 along the way. 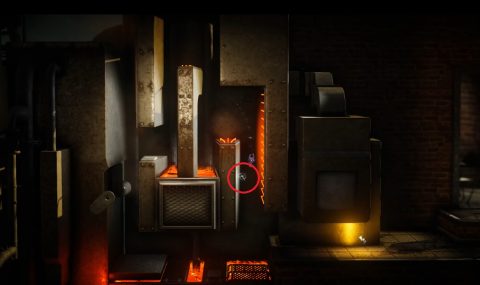 Follow the spark to the right and separate the Yarnys. Have one stand on the button while the second goes under the box. Drop the box and climb on top of it. Lift the box again and jump over to the yellow handle and down the left side to make a loop. 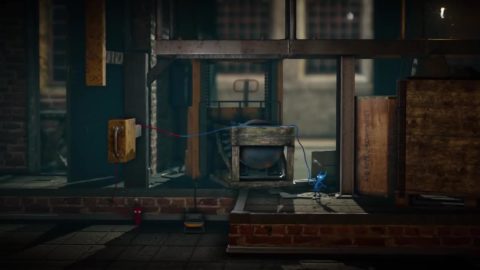 Switch Yarnys and have the other one follow the same path until he’s standing on the yellow handle. Bring the other one up and combine them together. Jump off the bar and onto the metal walkway above.

Go through the pipe to the fire room. Dangle one Yarny off the edge to the right and you’ll need to maneuvre him around the flames. Drop him down to the left to pick Spark #4. 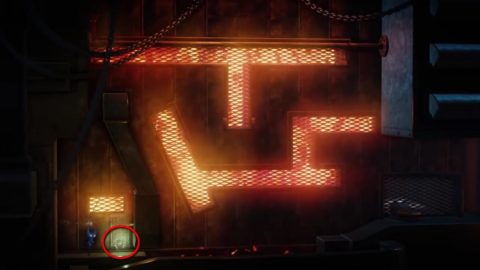 Now do the same thing but dangle the second Yarny around the flames to the right. Press the button to move the metal block to the right so the first Yarny can drop down as well.

Follow the Wisp by jumping across the rolling cylinders. You’ll need to make a couple of swings along the way.

Jump across the moving bars to the next checkpoint. Jump through the gap, wait till the bar is about to drop and jump off the bar to the right and up to the top. 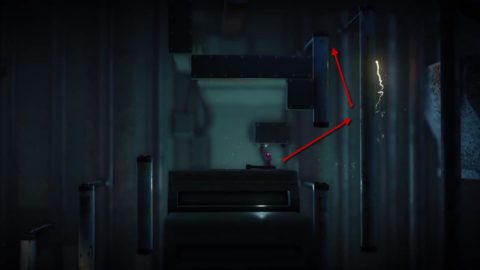 Jump up on the left side and drop down onto one of the moving platforms. As you make your way across you’ll need to jump up between a few metal bars along the way. Lasso the attach point and swing across to the spark.

For the next section stand on the platforms and wait for them to shoot you up in the air. Direct your jump to the next platform to the right. The last one will shoot you into a cage.

The next few are more difficult. You’ll need to direct your fall through two flames and then lasso an attach point so you can swing over to the next one. 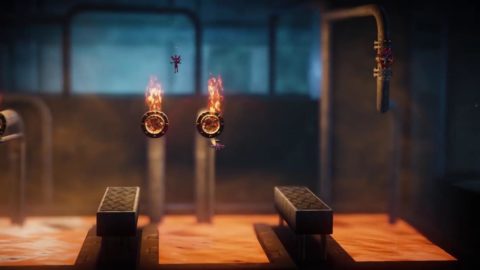 Use the last platform to lift you high enough so you can lasso an attach point and swing over to the other side.

Drop down and push the lever to bring the small cage across the water. Hop in and take the cage across to the other side.

Drop down the machine on the other side and into one of the wooden boxes. You’ll need to avoid being crushed as the box fills up with packages as you’re moved along the conveyor belt.

Try to keep up with the wooden box as you make your way over the machines and back onto the box on the other side. As the boxes are stamped you’ll need to jump onto the stamper and then over the roller. 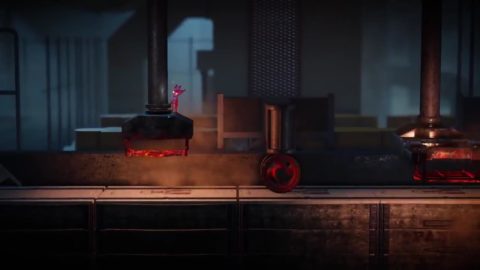 Make your way along the pipes to the right until you come to a small room with moving parts. Jump up from one to the other until you’ve made it to the top. 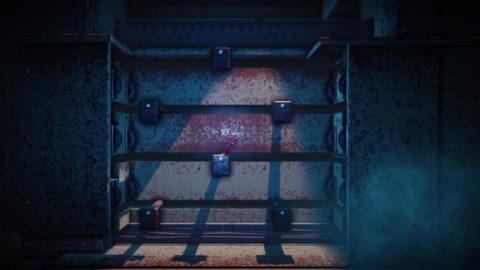 Continue up to another set of moving parts. This time there are revolving knobs in the middle that you’ll need to avoid. Once you’re up the top follow the Wisp through the chute to the right. You’ll drop into a room with three red switches.

Separate the Yarnys and hit the switch to bring the left pipe close to the wall on the left. Jump one Yarny off the wall and onto the pipe. Move the pipe to the right and jump across to the middle pipe. Do the same with the third pipe and then over to the controls. Lasso the lever and pull it down to get the machine working. 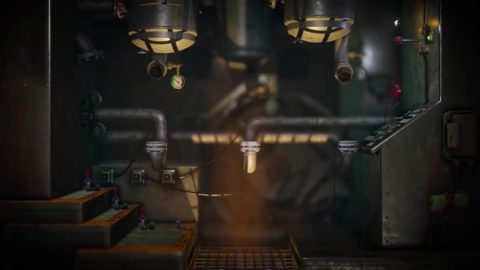 After falling down the grate make your way to the right and then down the gap with the pipes. You’ll need to move fast enough to avoid the little flame creatures. Head to the right, swing across the gap and push the part through the tunnel. Drop down the other side and swing across to enter the pipe. You’ll land in a rubbish bin outside.

Follow the spark across the walkway and down the steps for a cut-scene. The Wisp will create two little sparkles that you need to reach. There are 3 red switches at the bottom that move the platforms. Use the Yarnys to tie knots to the first, second and third switches. Then move them together up the platforms. 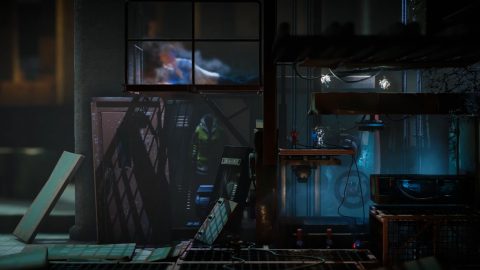 Follow the Wisp to the right and swing into the pipe. You’ll land on a forklift. This one doesn’t work so head to the right. Climb up the yellow barrel and lasso the lever above. Pull it down to power the forklift which will crash through the wall allowing you to make your escape.