Maiev’s Distress – Reach Maiev’s base with Malfurion and Tyrande in order to give assistance.

Night Elf Fleet (Optional) – Reach each of the 3 Night Elf ships to bolster your forces. 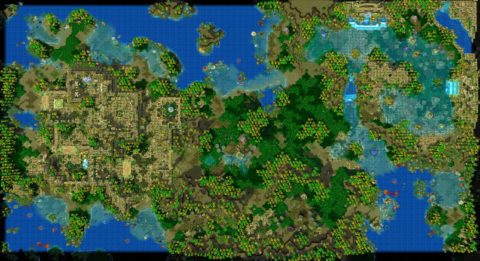 You begin this mission with your forces separated. Maiev is in a base of her own and must defend against the Naga forces. Malfurion and Tyrande are in a separate location and must find a way to Maiev’s base.

Maiev’s Distress – With the funds you have available start preparing your defenses. Build some Wisps and use them to build Ancient Protectors along the entrances. Collect the Night Elves at the base together and form a group with Maiev so you can easily move them all to the entrance that the attack is coming from. The Malfurion and Tyrande rescue team will collect more gold along the way that Maiev can use to replenish her forces.

The path that Malfurion and Tyrande have to take is fairly linear so you aren’t going to get too lost. You will have to click back to Maiev’s base to deal with any attacks.

To the north and slightly west of where Malfurion and Tyrande begin you’ll come across a throne room guarded by Revenants. Here you’ll find 750 Gold Coins and a Scroll of Healing. Just near to that is a fountain room with the Tome of Agility +2, Tome of Strength +2, Tome of Intelligence +2 and a Circlet of Nobility.

Continue heading around to the north and you’ll find some ships that have run aground. You’ll be given the Night Elf Fleet optional quest to find all of the transport ships. You can complete this once rescuing Maiev.

Wind your way back around to the south, until you are directly west of Maiev’s base. You’ll need to us Malfurion’s Force of Nature spell to remove the trees between the rescue team and Maiev.

Illidan’s Minions – Illidan’s base in in the north-west with a smaller base just to the north. Before you go there you might want to search for any remaining transport ships to complete the Night Elf Fleet quest.

The small base to the north should be easy to destroy and will give you access to a gold mine. There is a second gold mine far to the north of Maiev’s base and is protected by some Gargantuan Sea Turtles.

You should have plenty of time to research all of the upgrades and build up a sizable force to take out Illidan’s base. A mixed force with a couple of Mountain Giants in the front, your regular troops in the middle and Glaive Throwers at the back should be all that is needed to wipe out Illidan’s forces.

Next: Chapter 6: Shards of the Alliance