Rise of the Naga

Search and Rescue (Optional) – Satyrs have imprisoned some Night Elves. Find and rescue them.

Burning Ships – The Naga are setting fire to the ships. Save at least 2 of them so you can follow Illidan across the sea. 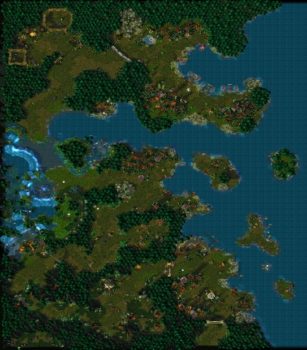 Rise of the Naga Walkthrough

Your first hero is Maiev Shadowsong. She is a Warden in search of the escaped prisoner Illidan. She has some pretty good special abilities such as Fan of Knives that does AOE damage to all nearby enemies and Blink that allows her to teleport short distances.

The Demons Trail – Luckily for Maiev, Illidan leaves a little trail of fire wherever he walks. It shouldn’t be too hard to track him then!

Head north through the burning town and then west through the gate where you’ll encounter some corrupted Furblogs. Destroy all the houses and crates that you come across because you never know where items will be hidden. Near the Furbolg area, behind the burning statue, you’ll find a crate with the Jade Ring inside.

Enraged Beast – Follow the path west and north and you’ll find a Huntress and her party who were attacked by a Wildkin. Continue to the east and you’ll encounter three ferocious beasts. Once you kill them all you will complete this optional quest. The largest beast will drop the Tome of Agility.

Wind your way around to the north west. After killing the Naga break open a crate by the shore for the Tome of Intelligence +2. From here you can Blink across the to a small island. Kill the Naga there for a Tome of Strength.

Search and Rescue – The elves are held in the north-west corner of the map. There are two gates that you need to break down. The elves will join your party when you rescue them.

Burning Ships – Break the gate in the east to catch the Naga burning the ships. Quickly kill them all before they burn too many ships. You need to have at least 2 ships remaining to complete this mission. You will then sail across the sea in search of Illidan.

Next: Chapter 2: The Broken Isles

Back: Warcraft 3: The Frozen Throne