Blood on the Battlefield

After the battle you and your allies will be standing around the pyre. You can talk to them to find out what they’re planning if you want. Keira Metza and Lambert will be heading off together. Eskel will be leaving Kaer Morhen as well. Mousesack and Hjalmar will be returning to Skellige, Zoltan will be ready for a counter-attack, Roche and Ves will be a little dumbfounded and Letho, if he’s there, will also be getting ready to leave. 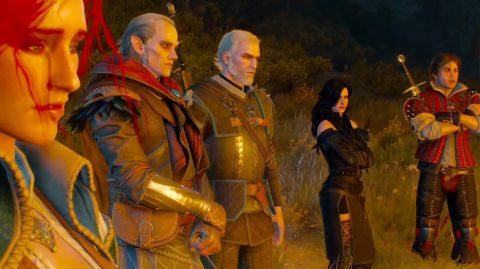 Make your way to the map marker to find Avallac’h and Yennefer arguing over Ciri. Avallac’h wants to teach Ciri to control her powers but Yennefer wants to take her to the Lodge of Sorceresses. Ciri will be angry that she isn’t being consulted and will storm off.

A few days later Ciri will be having difficulty trying to master the exercises given to her by Avallac’h. You can chooes to have a drink with her or tell her you have a unique way to make her feel better. If you want Ciri to survive at the end of the game make sure you choose the second option. This is the first of three choices you need to make to save her life.

Geralt will make a snowball and throw it at Ciri. This starts a snowball fight. Use the throw command to throw snowballs. When you run out you’ll need to spend a few seconds at one of the patches of snow to make some more.

Ciri is fast but you can target her when she stops to gather a few more snowballs. The first person to score 8 points wins.

The next morning Ciri will wake you to tell you she’s heading for Bald Mountain for the Sabbath where the Crones and Imlerith will attending. You can then propose that she stop by to see her father, the Emperor Emhyr, along the way. You can tell her the choice is hers but ultimately you’ll decide.

If you stop in to see the Emperor he’ll offer you your reward of 2000 Crowns a Bill of Exchange for another 100,000 Crowns. If you accept the reward Ciri will obviously be unhappy about it. Refuse and Ciri will grab your hand. If you want Ciri to survive at the end of the game make sure you refuse this reward. This is the second of three choices you need to make to save her life.

Once you reach Bald Mountain you can talk to Ciri about the celebration before meeting the hosts of the event. The story continues in Act III – Wild Hunt.