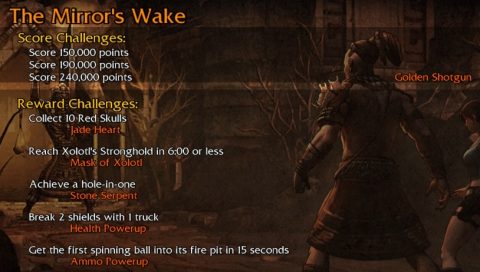 As you walk forwards along the path to the southwest you’ll be given a map of the area. Your goal is to make it through the Main Gate to Xolotl’s Stronghold. 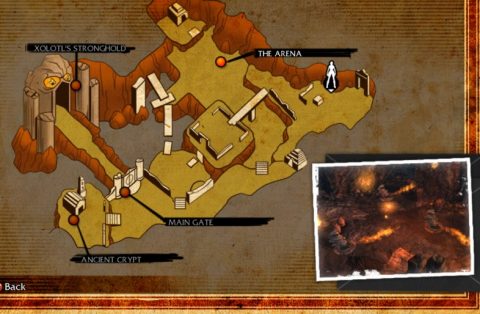 Grab the boulder from the pedestal, if you want a health upgrade later, and push it off. Just to the south you’ll notice some TNT. Blow it up and the wall behind it will explode. Go through the broken wall to find Red Skull #1. 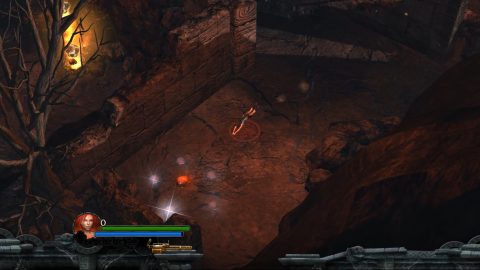 Grab the boulder again and push it along the path to the northwest. Roll it through the arch to the southwest and along the bridge. You’ll have to kill an Armored Ogre along the way.

Roll the boulder across the bridge to the other side and take out the Lizards and Fire Ogre. Push the boulder off the edge to the southwest and drop down after it.

Take out another Fire Ogre and grab the High Power Shotgun. Roll the boulder onto the fire pit so you can pick up the Health Upgrade.

Run up the ramp to the south. The path to the right is blocked with fire so head to the left. Three Gatekeepers will appear. Two of them run away and one stays to fight. Kill it and grab the first Gatekeeper Key.

Head up the stairs to the west and grab Red Skull #2 by the flamer. Then enter the tomb next to the Health Shrine.

This tomb is a maze but it’s not too difficult to navigate. Make your way to the southwest to the spinning boulder. Blast it off and roll it to the fire pit. If you make it within 15 seconds you’ll get an Ammo Powerup. Ignore the enemies along the way and take them out afterwards. 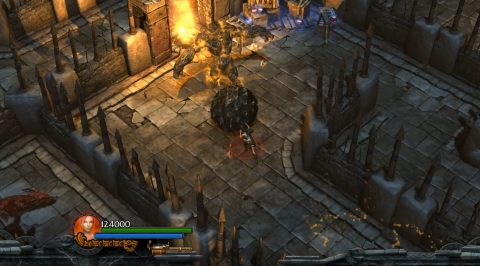 Place the boulder on the pressure plate and quickly run around the maze to the alcove to the north. If you get there fast enough the gate will still be open and you can grab the Ammo Powerup. 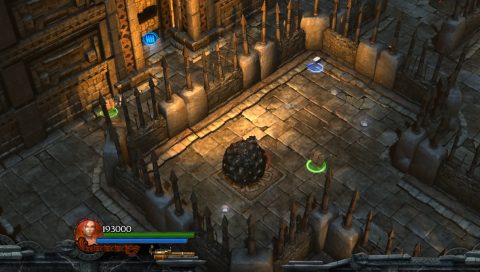 Go back, grab the boulder and place it on the fire pit to the west. Go through and fight the Gatekeeper. When you knock off its shield it will drop the second Gatekeeper Key.

Run to the southwest and then south. Grab the Artifact (Dark Drum) from the pressure plate and head through the gate. 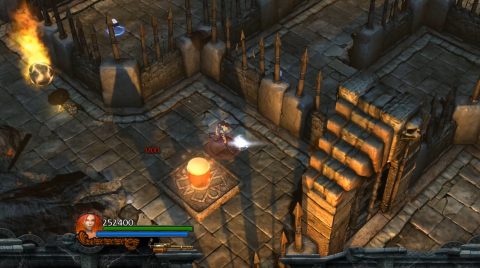 Make your way to the exit and leave the tomb. Head to the east. The fire barrier should now be open. Take out the Fire Ogres and enter the challenge tomb in the far east.

Place the boulder on the pressure plate and put a bomb next to it. Grapple onto the ring behind the fire pillar and explode the bomb. 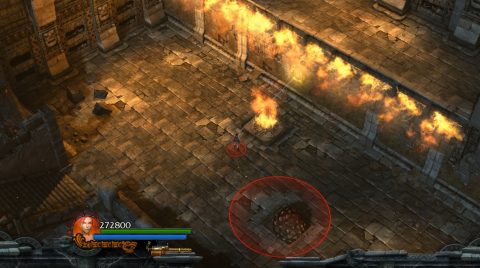 The pillar will lift up so you can climb up. Jump across to the ledge to grab the Artifact (Clay Serpent). Jump down and leave the tomb.

Head down the ramp and get ready to find a few red skulls. The first one is straight ahead to the north. You’ll need to grab it when the flaming rock is not exploding. Before you do that place a bomb next to the car where the 2 Armored Ogres appear. 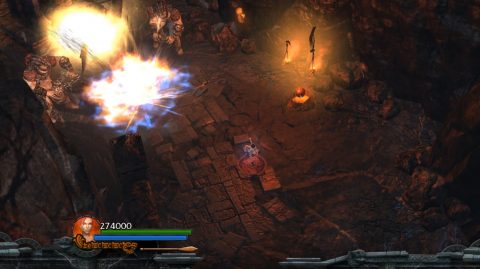 Blow up the car and the 2 Ogres will lose their shields. This gives you a Health Powerup as a reward. Finish them off and then grab Red Skull #6.

Stand as far to the north as you can, jump up and grapple the ring at the top of the cliff. Climb up and enter the challenge tomb.

Stand on the pressure plate and enter. The circular grates will randomly spurt out fire. You’ll need to avoid them while blasting off the boulder and getting a hole-in-one by getting it into the fire pit. The hole-in-one gives you the Artifact (Stone Serpent). If you miss just restart and try again. 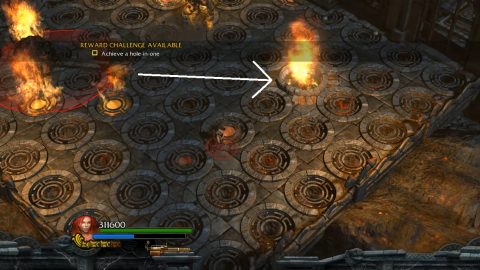 Once the boulder is in the fire pit the alcove on the northeast wall opens. Go inside for the Relic (Mask of Cipactli). When you’re done leave the tomb.

Drop back down the cliff using the grapple and run to the southwest. Drop down off the path to the stone wall and grapple up. Swing over to the bridge, place a spear in the side of the stone wall and jump over to it so you can climb on top for Red Skull #10. 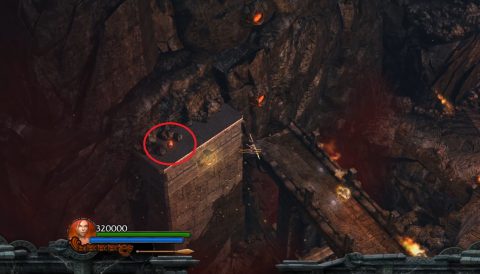 Jump back to the bridge and make your way along to the southeast. Jump the gap and then jump down to the ground. It looks to far but you can make it without taking damage.

Head up the ramp to the south and go west to the Main Gate. now that you have all the keys the gate will open. Run through and head towards Xolotl’s Stronghold to end the level.