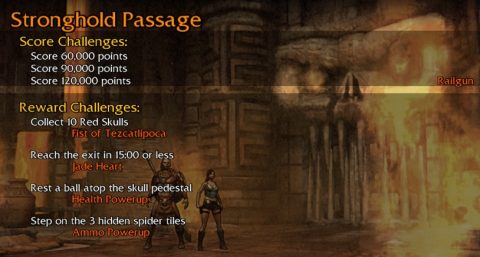 This is another one of the “open the gate” levels. This time you need to find 6 of the boulders and place them on the fire pits. Walk forwards and the fire pits will activate. Take out the Ogre and then head up the stairs to the northwest.

Place a bomb on the lowered pillar. Stand on the pressure plate to reverse the pillars. When the pillar with the boulder is at the same height as the second pillar blow up the bomb to push the boulder off. 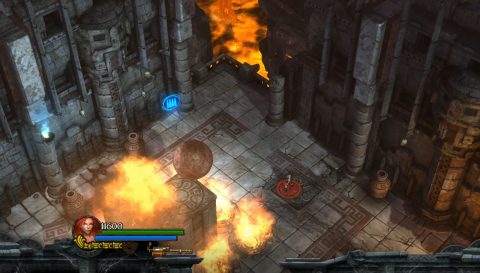 Kill the Ogre that appears and then the 2 Skeletons. To get the Ammo Upgrade place the boulder on the pressure plate with a bomb next to it. Stand on the first pillar and explode the bomb. When you lift up jump up for the Ammo Upgrade. Drop down and roll the first Boulder down the stairs to the entrance room.

Head up the next set of stairs and grapple off the edge at the first landing. Down below you’ll find a Health Upgrade. Climb back up, continue up the stairs and jump across the gap.

Use a bomb to blow the second boulder over the lip of the ramp and into the hole. It will drop down to the entrance room below. 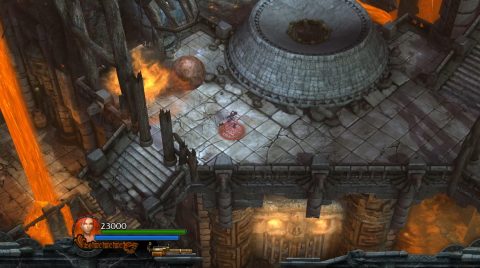 Head up the stairs to the room with the boulder over the fire. Climb down the ladder and enter the tomb to the north. Place a bomb by the target and stand on the spike tile on the second row, fifth from the left. 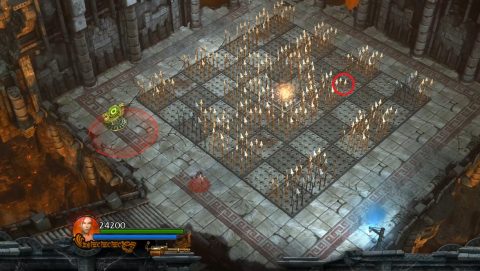 Explode the bomb to change the target. You’ll now have a clear path to the Artifact (Stone Serpent). Leave the tomb.

Head to the south and when you’re halfway down the stairs throw a spear at the pillar with the Red Skull on top. Jump up the spears and grab Red Skull #1. The first Spider Tile #1 can be found in the corner of this platform. 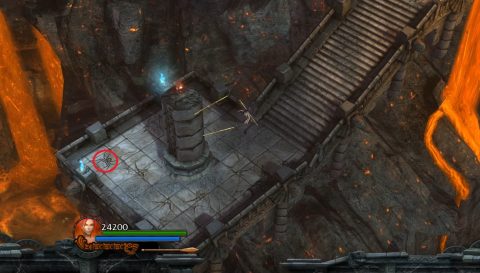 Head back up the stairs and climb up the ladder.

Take out the enemies and roll the boulder to the gate to the southwest. Place a bomb next to it. Pull out the handle on the other side of the gate to open it, then explode the bomb so it gets knocked through the open gate. Roll the boulder down the stairs and blast it into the hole.

Jump across the gap to the southeast, then across the next gap while avoiding the flamer. Head up the stairs and place a spear in the wall. Use it to jump up to the ledge above.

Take out the 2 Skeletons and then climb up the ladder. Watch out for the exploding rocks as you enter the next room.

On the pedestal you’ll find the Dual SMG. Grab them and then head up the ramp to the next room. The ramp will lift up locking you inside. You’ll need 3 boulders to get back out. One boulder will roll down the long staircase.

Roll the pillar to the edge of the platform and lower the pillar. Explode the boulder so it is blown across the lava. Immediately shoot the target so the pillar is lifted up. The boulder will bounce across to the other side. 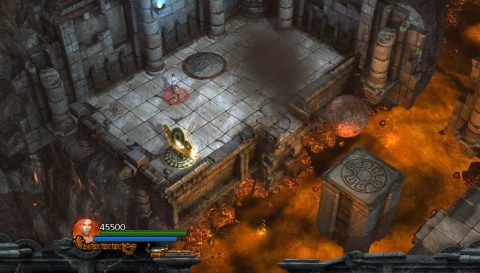 Jump back across and roll or blast the boulder back down the long stairs. Roll the boulders next to the fists. Blow up each fist to lift it up and quickly roll the boulders underneath. This will stop the exploding rocks.

There’s one more boulder to get. Run to the east and head up the stairs. Jump off the edge at the first landing for Red Skull #2. Quickly grapple the ring and climb back up. 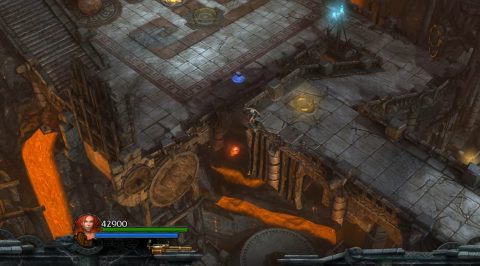 Continue along the pathway. Shoot the target and throw a spear at the wall. Place a bomb by the target. Climb up the spear and hang onto the wall. Blow up the target and climb up to the stairs. Continue up the Skull Pedestal. 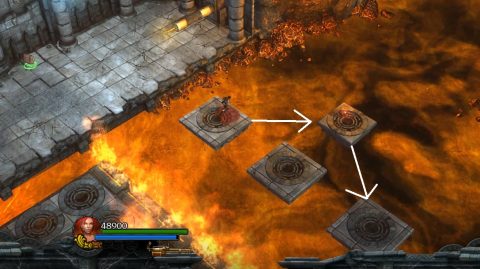 Grab the boulder and place it next to the lava by the large platform. Blast it across to the platform and push it towards the other side. If the boulder falls into the lava another one will fall down the chute.

While avoiding the moving fire try to get the boulder as close to the western edge as possible. Use a bomb to blast it the rest of the way across.

Pull the handle on the eastern side and jump back across the tiles to the other side. Grab the boulder and take it to the Skull Pedestal. If you want the reward blast the boulder onto the pedestal. You’ll need to have upgraded the Bomb skill at least once to be able to reach it. Place the boulder 4 to 5 tiles away from the pedestal and blast a bomb from behind. 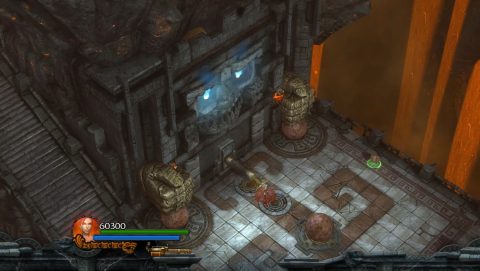 Make your way down to the gate and take out the enemies along the way. Once you’re down the bottom roll the 6 boulders into the 6 fire pits. The gate to the trapped hallway will open.

Enter through the gate and then the tomb to the west. Hit the target, place a bomb next to it, and run around to the west side of the pillar. Throw a spear at the pillar, shoot the target and jump to the spear. Explode the bomb and jump across to the Relic (Mask of Tezcatlipoca). 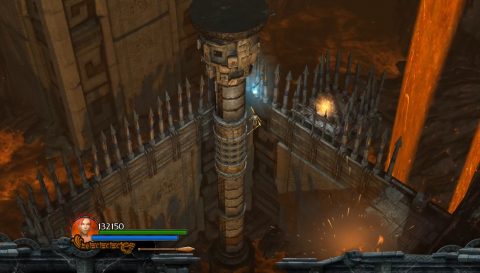 Shoot the target again and leave the tomb.

Watch out for the falling rocks as you make your way through this final section. Here you’ll find Red Skull #7, #8, #9 and #10. I find it’s best to not roll and just run at Lara’s normal speed. This gives you time to avoid the gaps caused by the falling rocks. 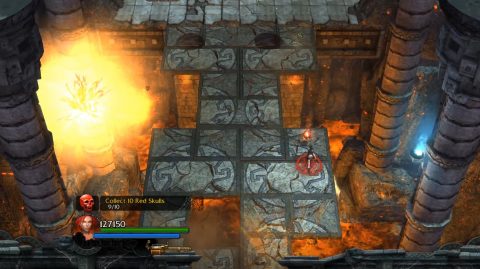 Blow up the stone casket on the left side of the exit to uncover Spider Tile #3. This should give you a Armor Powerup reward. Head through the exit to complete the level.