This level is mostly a boss fight with a large T-Rex. The fight triggers once you go over the bridge or the river to the western side.

Before starting the fight run to the south and pick up Red Skull #1 from the rocks in the river. 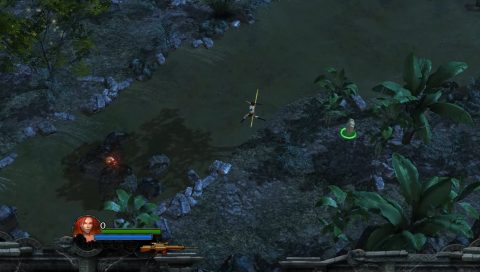 Now run to the north of the river and pick up Red Skull #2 hiding under the leaves of a tree. When you’re ready cross to the western side for the boss fight.

Once you kill the T-Rex the level ends so you’ll want to find all the collectibles while the T-Rex is chasing you around.

This level is a large open area. Keep your distance from the dinosaur as you explode all of the columns. You’ll find Red Skulls hidden behind some of them.

To meet the requirements for the score challenge you’ll want to keep your Relic Meter full while triggering and killing as many enemies as you can.

When you’re ready to deal with the T-Rex draw him towards one of three spike pads. Hit or blow up the nearby target to trigger the spikes. If the T-Rex is one the pad it will take 1/3 damage and the pad will be destroyed. 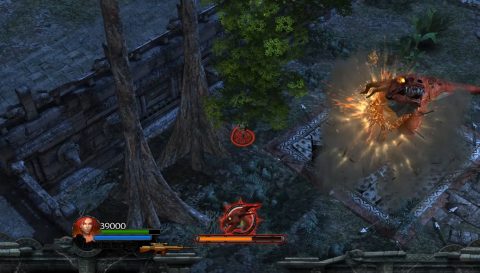 Repead the process for the other 2 spike pads and the T-Rex will be killed. The level ends as soon as the T-Rex is ot of health.