Level 1: The Temple of Light

The Temple of Light (Level 1) 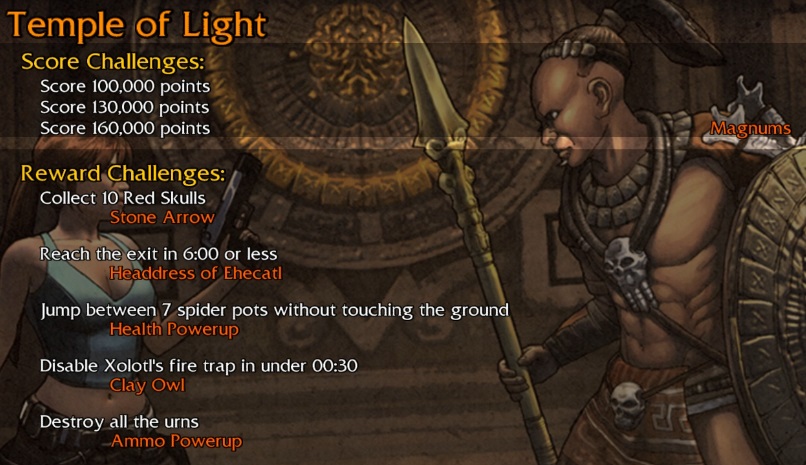 From the start run around the platform behind you to pick up all the Gems. I won’t mention the location of all the gems but if you’re going for the score challenges try to pick them up. Use bombs to free the cogwheels on either side of the large gate.

Head up the stairs to Urns and shoot them all if you want to complete the Destroy the Urns challenge. One of the Urns to the south will be hiding Red Skull #1.

Continue up the stairs and run across the walkway. Use a bomb to destroy the Arrow Traps and continue to the next platform.

When you enter this room Xolotl will confront you and then run away. Totec will give you his Spear and then you’ll be left behind to deal with the enemies. Once you’ve killed them head up the stairs to the next room.

Just to the right you’ll spot Red Skull #2. Before you grab it make sure you destroy the Arrow Thrower. Then stand on the pressure plate and go through the gate. 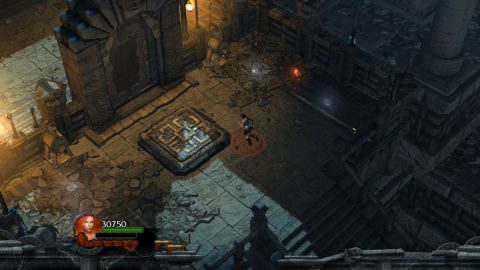 Use a Spear on the wall and climb up to the ledge above with the Healing Shrine. Destroy the Urns and continue up the stairs.

In the wide hallway above you’ll be attacked by enemies. Take them out and then run up the stairs. Destroy the Arrow Throwers and use the grapple to swing across the gap. Climb up for Red Skull #3 and stand on the pressure plate to open the second gate.

As you head down the stairs you’ll be attacked by enemies. They’ll jump up one-by-one from the courtyard below. Blow up the TNT but make sure you’re not standing too close. Then head up the next set of stairs.

Grab the Handle and pull it out to open the third gate. Go through and destroy the 2 Arrow Throwers. You’ll be attacked by a handful of enemies.

If you need health go down the steps, otherwise throw a spear at the wall under Red Skull #4. Jump across to it and climb up. 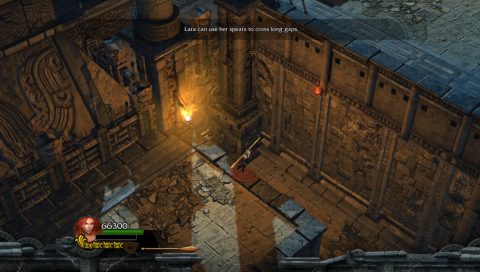 Blow up the Arrow Throwers and grab the first Artifact (Clay Arrow) from the center of the room. Then grab the Handle and pull it out to open the fourth gate. Go through and run up the stairs.

This room has a Health Shrine in the center. Climb up the ladder and blow up the Arrow Throwers. Grab Red Skull #5 and then deal with the enemies that jump onto the platform.

Push off the 2 stone balls and climb down the ladder. Place the balls on the two pressure plates to open the next gate. Head up the stairs to the next room.

This is one of the reward challenges. Jump onto the first spider pot and jump from pot to pot. When you reach the seventh spider pot the challenge will be complete. Along the way you’ll pick up Red Skull #6. 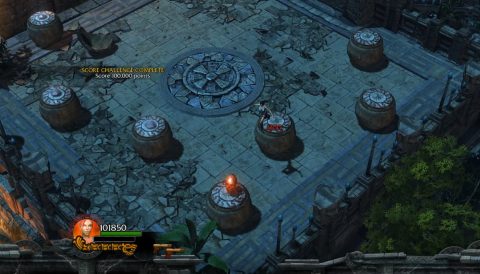 Grapple across the gap to the north and go through the open gate to the Fire Trap.

This is another reward challenge. You need to disarm the fire trap within 30 seconds. If you make a mistake you can quit out to the menu and continue from the last checkpoint.

First roll to the left and place the ball on the west pressure plate. Roll back to the right and pull out the handle. The fire machine will start turning the other way. Follow it around counterclockwise to the ball and place it on the northern pressure plate.

Quickly roll around to the southern handle and pull it out. The machine will explode and the gate to the south will open.

Go through the gate to the south and grab Red Skull #7. Stand on the pressure plate and run across the platforms to the other side.

Stand on one of the pots and throw an arrow at the wall. Jump to it and then across to Red Skull #8. 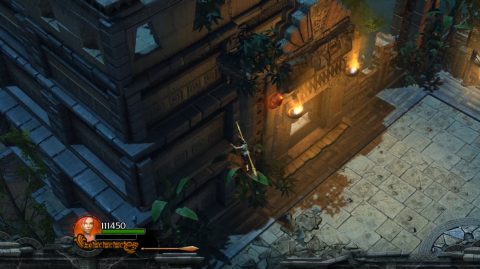 Run down the stairs to the next area.

Use the grapple ring on the other side and walk off the edge. Swing over to the left to grab Red Skull #9. Climb back up and shoot or explode the Target to open the next gate.

Go through the gate and turn around to shoot the Target again. This will close the gate behind you and open the one in front. You can also leave a bomb and explode it once you’ve passed the first gate.

A huge Ogre will burst through the wall. Watch out for its charge attack. You can drop bombs and explode them when it’s in range. After you’ve killed it a second Ogre will appear from the northeast. You also have a handful of smaller enemies to deal with.

If you want all of the challenges make sure you destroy all of the Urns in this area.

You’ll notice a light emanating from unexplored tombs. Enter the tomb to the north and grab the gems. Shoot the target on the other side of the room to open the first gate. Throw the Spear at the target and quickly roll through the first gate before it closes. 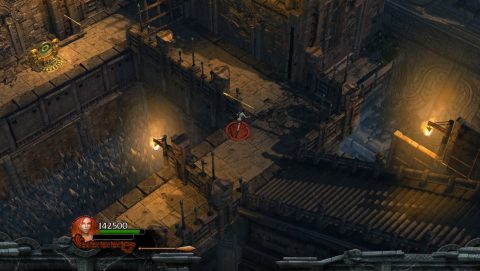 Behind the target you’ll find an Ammo Upgrade and on the platform between the two gates you’ll find a Health Upgrade. When you’re done leave the tomb and continue up the stairs.

Break all the Urns on the first platform. This should be the last of them so you’ll get the notification that the Destroy the Urns challenge is complete.

Continue up the stairs to the next area. Make your way along the walkway and you’ll be attacked by 2 Ogres. Kill them and then enter the next Challenge Tomb.

Shoot or drop a bomb and explode the target again. Move one of the balls down to the pressure plate to the south of the room. The wooden platform by the Arrow Traps will lift up. Jump across the gap, destroy the Arrow Traps and grab the Ammo Upgrade.

Leave the tomb and go through the exit above the stairs. At the top of the steps you’ll find your first Relic (Knife of Itzli).

Pull the Handle out in the next room and quickly jump across the wooden platforms as they lift up. On the other side you’ll find Red Skull #10. As the machine starts rolling forwards you’ll need to use the Spear to jump the ledges. On the last one you’ll need to Grapple up to the top. Head out through the exit to end the level.