Level 11: Belly of the Beast

The Belly of the Beast is another boss fight. As you run over the collapsing bridge you’ll grab the Rocket Launcher on the other side. The T-Rex will appear from one of the lava pools.

The central platform has an Ammo Cache. There are also 4 Red Skulls on the bridges on either side. Stand on the four pressure plates to lift up the bridges in each of the directions. You can then quickly run across to grab the Red Skull and fill up your ammo. Quickly run back before the bridge closes again.

There’s one Red Skull hiding behind the most southeast pillar and another behind the northwest pillar. You’ll need to destroy the pillars to reveal the red skulls.

Use the Rocket Launcher to injure the T-Rex. You should be able to get off a few shots before needing to run back for ammo. 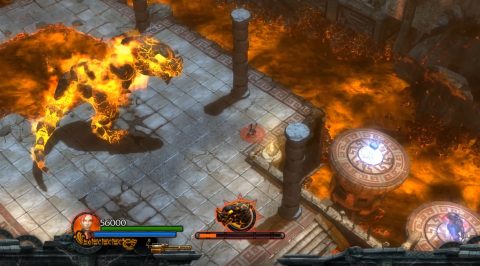 Once you have all the rewards finish off the T-Rex to complete the level.