Mugen has been captured and it’s up to Yuki and Takuma to rescue him. You’ll also need to rescue some of the villagers and bring them back to the escape point. 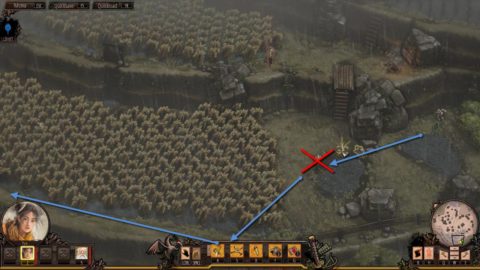 Kill the Guard standing by the puddle. Sneak around the edges of the puddle as Guards will hear you if you make a splash. Hide the body behind the rocks to the right so other guards won’t spot it.

Now make your way with both Takuma and Hayato around the crops to the west. Leave Takuma at the end of the crops and sneak Yuki closer to the house. A Guard will come out and shoot a villager. You can quickly kill him while he’s by the door but it’s safer to wait until you takes up his position. 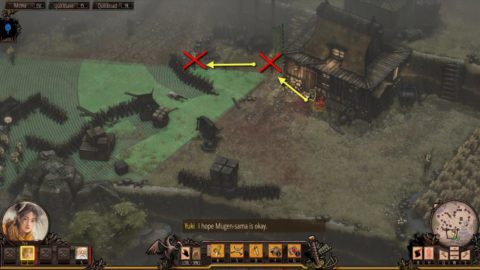 Sneak around the house and take out the Straw Hat Guard and the regular Guard. Hide them both in the corner between the house and the wall. You’ll need to make sure you kill them when the guard to the west isn’t looking and the 3 guards on patrol are walking away from you.

Hide Yuki behind a barricade and use Kuma to distract the guard to the west. Play the Flute when he’s close enough and kill him as he walks around the barricades.  Take both Yuki and Takuma and climb up the tower just to the north. Have Yuki kill the Guard at the top of the tower. There’s 3 bullets for Takuma in the box. 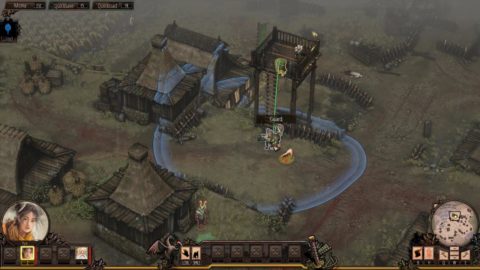 Place Kuma at the base of the ladder and have Yuki pick up the body on top of the tower. When the 3 guards get into range have Kuma call them. When they’re near enough Yuki can throw the body down, knocking out all three of them. Jump down with Yuki and finish them off before they wake up.

Sneak Yuki up towards the Sumarai. When she’s close enough have Takuma shoot the Samurai and attack with Yuki while he’s distracted to finish him off. Mugen is being held in an open area to the west, just behind the cart and barricades. You’ll need to kill the guards around the perimeter before rescuing Mugen. 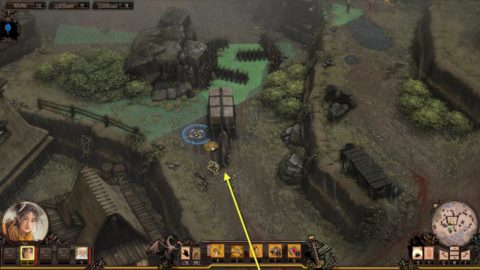 Bring Yuki up and place a trap on the left side of the cart. When the Guard on patrol gets close play the Flute to draw the Guard around and into the trap. Pick up the trap and sneak up to the bushes on the left. Bring Takuma into the same bushes and get ready with the rifle. 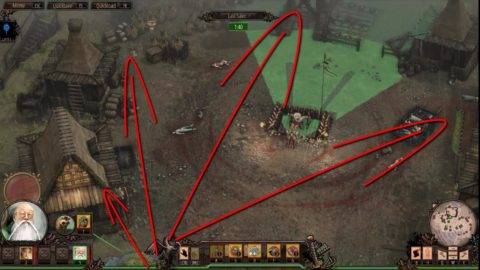 Take out 4 of the Guards around the perimeter. One on a hill towards the right, one as he stands on top of the tower, a third on a roof near to the bushes and a fourth near to the hay as he goes on patrol.

Sneak Yuki closer to the Samurai and then simultaneously attack with Yuki and shoot with Takuma to take down the Samurai. Crtl click on Mugen to rescue him. 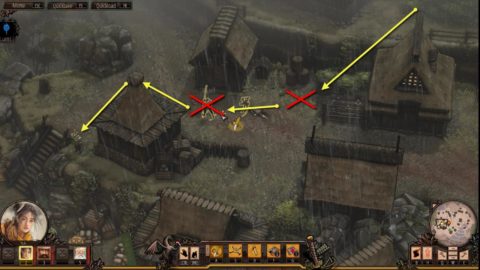 Bring Yuki down the vines and take out the guard standing there. Drag him into the bushes and then take out the other guard as he goes back on his patrol. Sneak Yuki up to behind the Samurai. Bring Mugen and Takuma the long way around. Double team the Samurai like last time and drag his body behind the house. 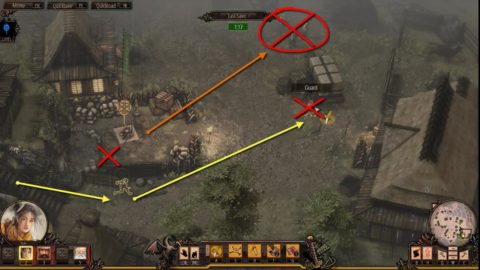 Bring Yuki down the stairs, shoot the Guard behind the barricade and run up to kill the other Guard as he works on the cart. Mugen is now free to grab his belongings. Send him toward the 3 Guards as they talk and use Sword Wind to kill them all in a single strike. Bring all 3 characters up the path to the north. You’ll come to a spot that’s guarded by 2 Samurai, with a 3rd Samurai on patrol. 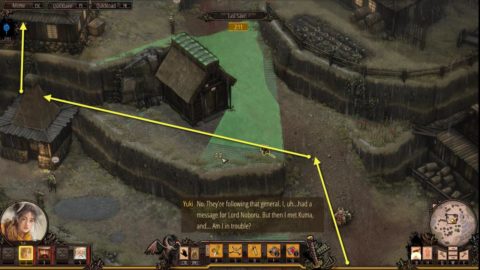 To get Yuki behind the lines sneak her to the west just out of sight of the Samurai and use the grappling hook to make it up to the rooftop. 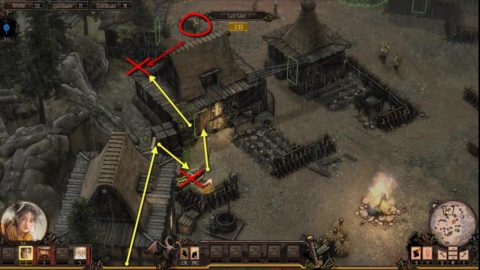 Bring Yuki across the rooftops and drop down on a Guard below. Hide him in the house before the Samurai on patrol sees and then climb up the vines to the next house. Stay up on the roof and use the Flute to lure the Guard. When he gets close drop down and kill him, hiding the body behind the house. Come back through the two houses towards the two Samurai. 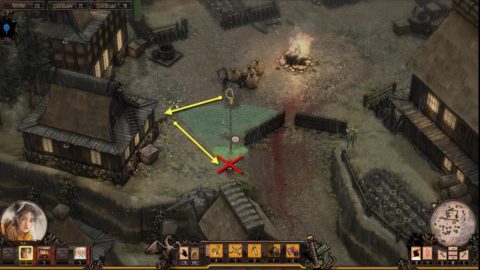 Yuki can take out a Samurai herself if you time it correctly. Shoot at the Samurai on the left at maximum distance. Run her around the field of view and then attack the Samurai again from the side to finish him off. Drag the body to the left and throw it off the hill.

Now run Mugen up and kill the second Samurai. You can throw his body onto the roof on the right. Duck Mugen down behind the barricade so the patrolling Samurai won’t see him. 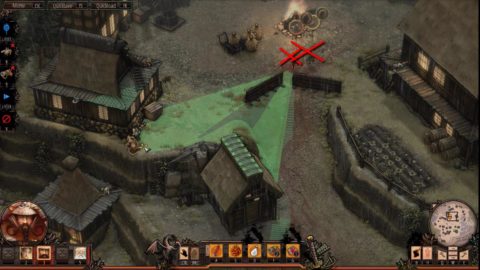 Hide Mugen in the corner by the building and Yuki on the roof. Use Shadow Mode to have Mugen use the Canon on the Samurai and Yuki the Handgun on the regular Guard. When they get into range shoot them both. Mugen can now run up and clear out the rest of the Samurai and Guards. Get close to the villager speaking to the Samurai and the villagers in the yard to gain control of them.

When you get control of them you only have a limited time before a group of guards arrive. Bring Takuma down the path to the south first. Position him just by the barricades. 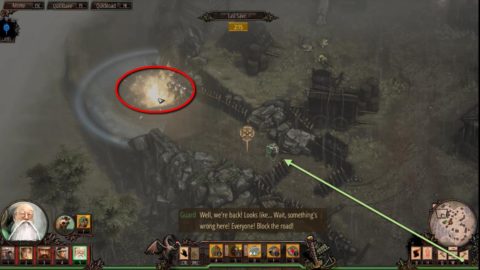 As soon as the Guards are in range throw a Grenade to kill them all at the same time. Bring Mugen, Yuki and all the Villagers back to the meet-up point to complete the mission.