You have three main objectives for this mission, kill the 3 Officers, destroy the Supply Depot and then kill General Okkoto. Yuki and Takuma are working together, as are Hayato and Mugen. Start with Yuki and Takuma. 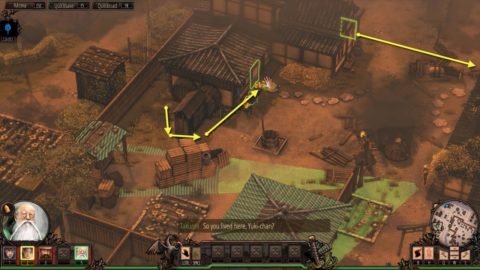 Sneak Yuki and Takuma around to the front of the house and go inside. Exit the other door and head to the right to hide behind some debris. 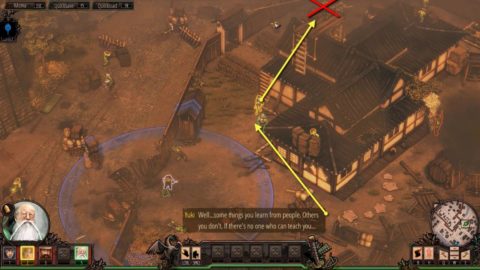 Send Kuma out to distract the Guard by the fence and then climb up the ladder on the side of the building. Yuki should climb the second ladder first and kill the Guard at the top. Takuma will find some more Ammo in a box at the top. From here Takuma should be able to spot 2 Officers and a Guard in a tower. 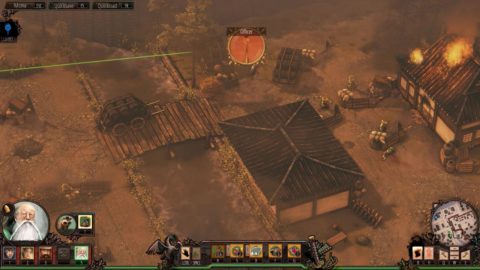 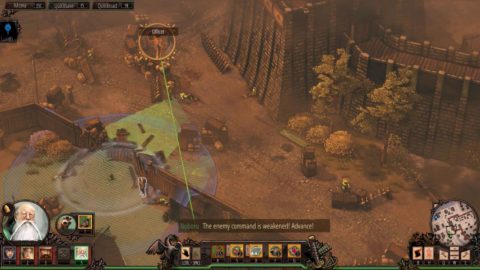 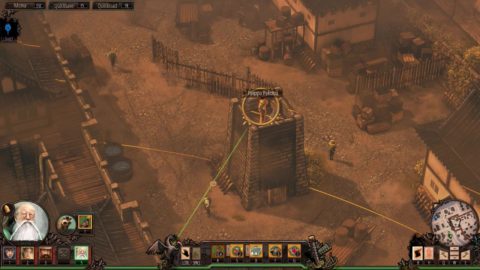 Switch over to Mugen and Hayato. 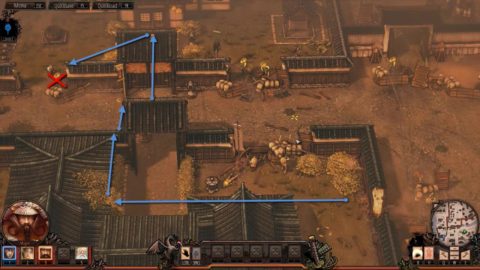 Have Hayato climb up the vines on the left and then grapple up to the roof above the entrance. Walk over the rope to the other side and when the coast is clear jump down onto the Straw hat Guard on the right. Carry his body a fair distance to the right, in front of the fence so the guards on the other side won’t spot it.

Bring Hayato back to where the friendly guards are firing at the 2 Straw Hat Guards across the way. 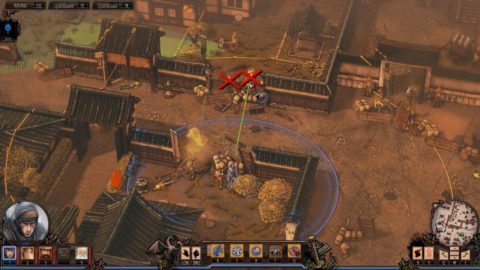 Duck down in the bushes just to the right of the other soldiers. Stand up and shoot the Straw Hat Guards one-by-one. Leave this compound through the gate and walk down the path to the right, towards the third Officer. 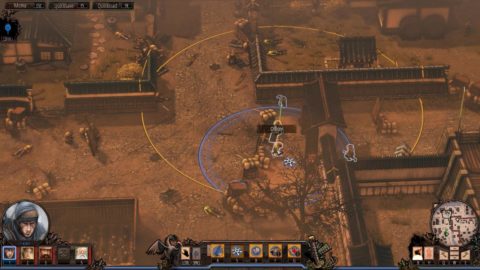 Sneak along the fence and when you’re close enough and use a Shuriken to take out the third Officer. Wait for the friendly soldiers to take out the rest of the bad guys and then retrieve your Shuriken. You still have to be careful of the guards on the other side of the gate.

Continue along the path to the steps leading to an outer courtyard. Hide behind the wall with both Mugen and Hayato. 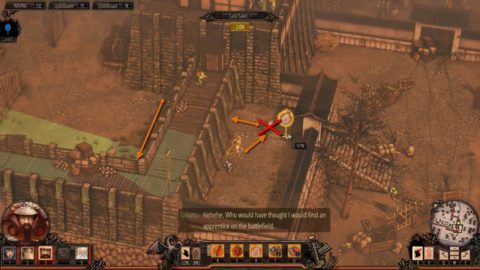 Place a Sake Bottle just in front of the passage so that a passing Guard will spot it. Once he reaches the Bottle take him out. Bring both Mugen and Hayato through the tunnel and into the corner where they can both hide in a bush. 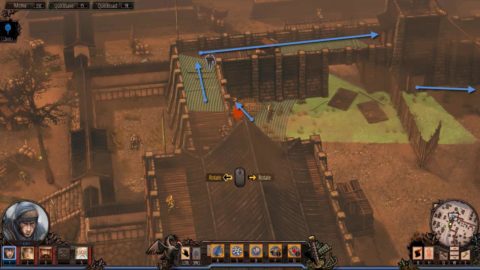 Bring Hayato up to the walkway using the hook and into the lookout tower. You’ll need to time it for when the Samurai leaves the walkway. Exit out the ground floor door and then grapple up to the roof of the building nearby. 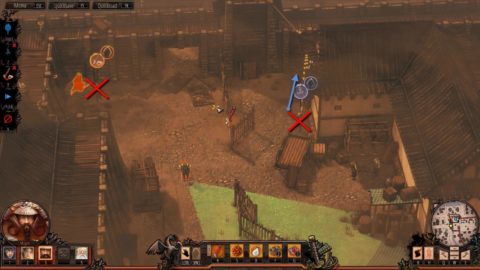 Go into Shadow Mode and target both the Guard in the corner and the Straw Hat Guard next to the other building. You’ll need to time the strike for when the Patrolling Samurai starts walking away. Have Mugen hide the body in the bush and Hayato needs to carry his guard all the way to the back of the building or it will be spotted. 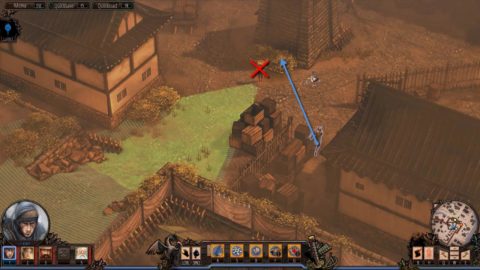 Run Hayato along the rear of of the building and at the other side make a dash for the bushes behind the Straw Hat Guard. When no-one is looking take him out with a Shuriken and drag him into the bushes. 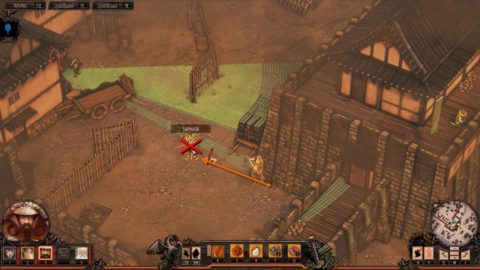 Mugen needs to crouch next to the wall and wait for the Samurai. He can attack as the Samurai reaches the furthest point of his patrol. Hide the body in the corner bush just in case someone sees it. 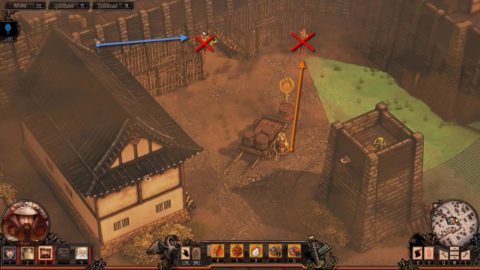 Bring Hayato onto the roof and hide Mugen behind the cart. First Jump Hayato down and run behind the pen to take out the Straw Hat Guard. When the Samurai turns around you can take him out with Mugen.

With Mugen take out the 2 Guards chatting by the Supply Depot with Sword Wind and take out the remaining Guard in front of the main doors with Hayato. Then have Mugen place the Explosive Barrel in the corner where the two guards were talking.

Bring Yuki and Takuma through the main gates and have Takuma climb up the tower. Shoot the explosive barrel to destroy the Supply Depot. Bring all four characters up to the north and stop just outside of view of the Straw Hat Guard. 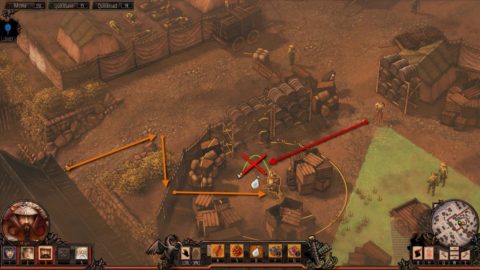 Bring Mugen around first and slice through the fabric. Bring Mugen inside the compound and crouch down behind the boxes. Throw a Sake Bottle to draw the attention of the Guard and take him out when he gets close enough. Bring Hayato through to the same position. 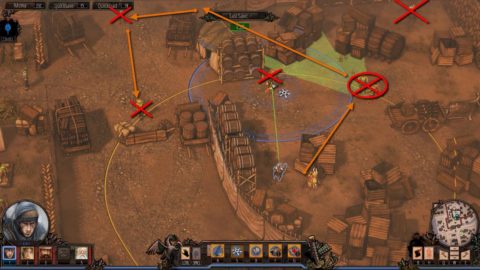 Take out the civilian with a Shuriken when he’s walking past. Make sure he’s out of sound and sight range of the Samurai and guards to the right. Use Sword Wind on the 2 Guards talking and finish off the guard in the corner if you wish. Slice through the fencing on the other side of the compound and then use Mugen to take out the Samurai and Straw Hat Guard.

The path is now clear for all of your characters to move further north to the meet-up point. Before taking Mugen there you’ll want to set things up for Okkoto. 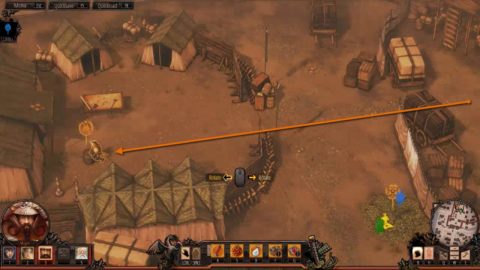 Grab an explosive barrel from the left and place it outside the General’s tent. Now head to the meeting point. After the cut-scene Takuma will easily be able to blow up the barrel when the General is next to it.