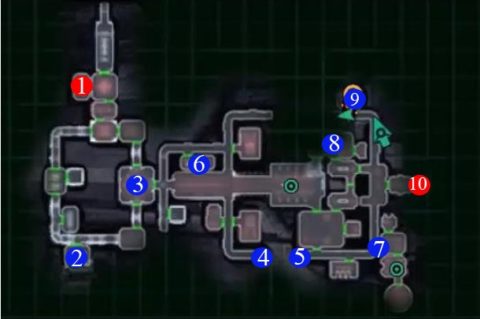 Mandalore will join your party as he needs to be in your party to place the Proton Cores. It’s recommended to have Visas as your other party member. Your goal is to place the 4 Proton Cores and destroy the Ravager. Unfortunately one of them will go off prematurely and you’ll need to find another one to replace it.

1) Entrance – You’ll actually start a few rooms to the south of this exit but will need to return here when you leave.

3) Sith Defense – You’ll need to head through this room to go to the eastern side of the Command Deck. There’s strong Sith resistance. Use group affecting Force powers to make the battle a little easier.

4) Second Proton Core – Head to the southern section first as you’ll need to go back up to #6 when one of the cores explodes. Place the second proton core here.

5) Third Proton Core – Once again place the third proton core at the end of this corridor. After placing this proton core one of the other ones will detonate. You’ll need to find a replacement.

7) Visas’ Room – This is the room where Visas used to stay. Give her a chance to meditate inside and her maximum force points will increase.

8) Colonel Tobin – You’ll meet Colonel Tobin here. Either give him a chance to change his ways and help out with the destruction of the Ravager if your a Light sider or kill him if your a Dark sider.

1) Exit to Ravager Command Deck – You’ll enter at #1. Make your way towards Darth Nihilus, taking out any Sith along the way. There are some fairly large battles so use group force powers to take them out.

2) Darth Nihilus – A conversation will begin as you approach Darth Nihilus. If you have a high enough Intelligence or Wisdom you can tell him that Kreia has lied to him. This will weaken him slightly.

Use any buffs and shields that you need as this is a tough fight. When you have him down to half health Visas will interrupt. Try top get her to break the link with Darth Nihilus. Keep fighting within him until he drops to the floor. You can search the body and remove the mask. The mask can’t be equipped but it will provide you with some extra Force points.

Once you’ve finished head back to the Ravager Command Deck and take the exit at #1.