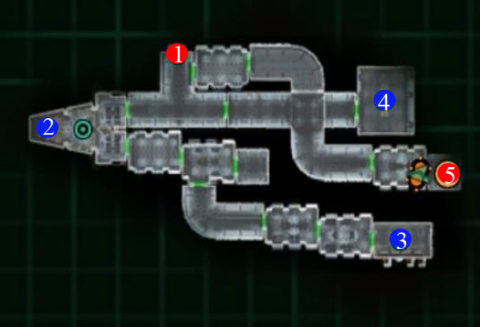 You have two objectives on this section of the Harbinger. First you must make it to the Bridge #2 and download the Orbital Drift Charts. Second you must head to the Crew Quarters #5. You’ll be attacked along the way by groups of Sith Assassins. They’re pretty easy to defeat so you shouldn’t have much trouble here.

2) Bridge Console – use the console here to download the Orbital Drift Charts. You’ll need them when you finally get to the Ebon Hawk to make it out of the asteroid field.

3) Escape Pods – You’ll be attacked by two groups of Sith Assassins as you make your way to the Escape Pods. You can’t use them so this is a dead end but you will get XP for the fights.

4) Briefing Room – Log onto the console and view the holologs from members of the Harbinger. This also progresses a bonus quest about your history. 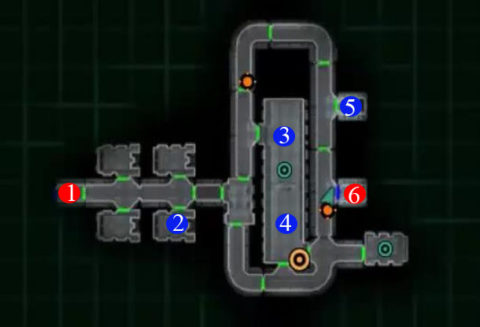 From the Command Deck you’ll first come across 4 dormitories. One of them is your own. There are groups of Sith Assassins on board and will attack in the corridors around the medical bay. Explore the area and then head to the exit #6 to the Engine Deck.

1) To Command Deck – This is where you enter the Crew Quarters.

2) Your Room – There may be some other items in the other rooms but in a footlocker in your room you’ll find your special armband with your name on it.

3) Med Lab Console – This is the central medical lab. There’s a number of cylinders here with items inside and a Kolto Tank that belongs to you. Although you probably won’t need it.

4) Medical Droid – In the southern section of the medical lab there’s a non-functioning droid. You can repair it to have it follow you around or just leave it alone. 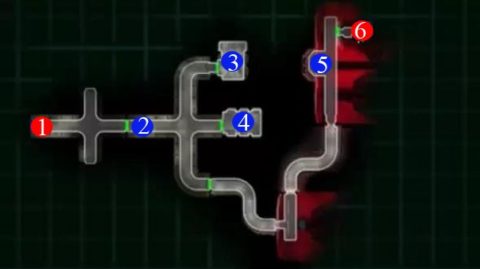 The Engine Deck is fairly straightforward. You need to make your way through a number of doors to the exit which leads back to the Fuel Depot on the Peragus.

1) To Crew Quarters – You enter the Engine Deck here.

2) Darth Sion – This is your first encounter with Darth Sion. Kreia will run off to deal with him. Giving you and Atton a chance to escape.

3) Workbench – There is a workbench here. I recommend upgrading your weapons with any ion upgrades as there’s still many droids you’ll need to fight through before making it back to the Ebon Hawk.

4) Engine Maintenance Control – Use the console here to open the door to the Ion Engines.

5) Main Ion Engine Control – Use this console to open the hatch leading out to the Fuel Line.

When you enter into the fuel line you’ll see T3-M4. Use him to pick up the Hanger 25 Control Conduit and then to recover the mine in front of the door.

Fight your way through the droids to another fuel pipe. Have T3-M4 recover the average sonic mine inside and continue out the other side of the pipe. Battle your way through more droids and head up the ramp. Half way up you’ll find a console. Use it to turn off the force field at the top of the ramp.

Run up to the top of the ramp, take a right and fight your way past the droids to the Peragus Docking Bay.

Follow the corridor around to the left. You’ll have to fight through many droids, some of which have flame throwers.

Bring T3-M4 up the ramp to the Hangar Control and ‘Replace hangar control power conduit to open door.‘

Head through the newly opened door. There are a lot of droids to battle so hopefully you have your ion weapons ready.

You’ll come to a Decontamination Console. You can shut down the decontamination system if you have a lot of Spikes. Otherwise just destroy the console to open the door and run through to the Hangar Bay.

Search around the edges of the Hangar Bay for items and then enter the Ebon Hawk. As you do you’ll be attacked by 25 Sith Assassins. You can kill them with the Ebon Hawk’s turret. If any get on board you’ll need to fight them inside the Ebon Hawk later. If you want experience let them all come on board and take them down the usual way.

After escaping Peragus II you’ll have a chat with Atton and Kreia. When Kreia leaves explore the Ebon Hawk. Go to the storage area and open the secret compartment in the wall. Inside you’ll find a Jedi Robe, Pazaak cards and other items.

Now head to the Port (Left) Dormitory and speak with Kreia again. If you say the right things you’ll gain some influence over her.

Go to the center of the Ebon Hawk and you’ll see a security door to the north-east. Open it to find HK-47 inside. First use Repair skill to diagnose the problem. It seems there are 4 parts missing. You’ve found one of them already on Peragus. Use the Vocabulator and insert it into HK-47’s core.

Head to the Bridge and take a look at the Galaxy Map. There’s only one place to go to, the Citadel Station orbiting Telos. Choose Citadel Station as your next location and proceed to the next section.