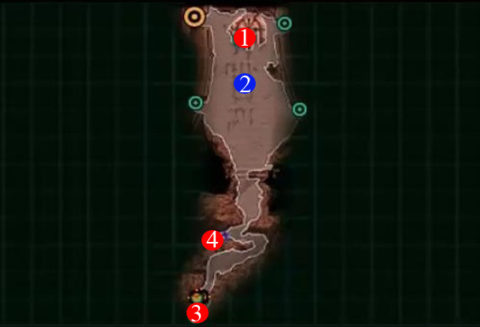 2) The Valley – There are two important points to note while walking through the valley. The first is that when you search any of the Skeletal Corpses you’ll be attacked by cloaked Hssiss Beasts which are guarding the remains. Secondly, when you go near one of the tombs on either side of the valley you’ll be given a short history lesson on each of the tombs.

If you’re a strongly aligned character you can enter the Shyrack Cave now. If not come back later as you won’t be able to enter the Secret Tomb until your character is ready. 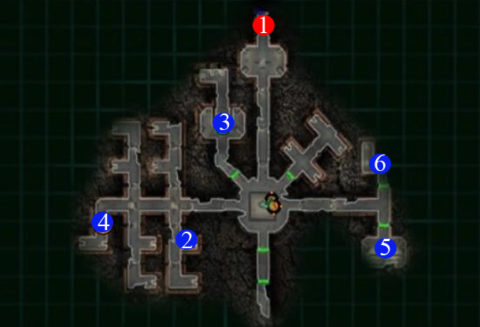 Go to the Library and learn all you can, which isn’t much because most of the information has been deleted. Come back to the Training Console and take your Level One test. Here are the answers:

After you complete level one you’ll be given access to the level 2 training in the Training Room at #5.

3) Library – This is what remains of the Sith library. Use the computer for some information about the Academy. Search the bag for Thorium Charges that you can use to open the door at #4 or save them for the hidden cache on Dxun.

4) Holocron – This used to be Uthar’s old room. If you use the Thorium Charge here you’ll be able to blow open the door and watch the holocron recording.

5) Training Room – Use the console in the middle to take the test. Something goes wrong and you’re given the Level 16 test instead. The Tuk’ata will be released from their cages. Kill them and check the console again. You’ll fail the test because you took too long and told to visit the detention room.

6) Detention Room – The Jedi Master Lonna Vash is lying dead in a cage. Search her for a double-bladed lightsaber and Datapad which provides information for escaping the Sith Academy. Use the console and click on Lonna Vash. You’ll now have access to the system commands and can open the front door.

As you head back to the exit you’ll be confronted by Darth Sion and 2 Sith Assassins. Make sure you have a melee shield to protect from his lightsaber attacks and use any other buffs that you feel necessary. Once he’s almost been defeated Kreia will call you back and you’ll run away.

With the Sith Academy completed it’s time to head to the Shyrack Cave if you haven’t already been there.

The Shyrack Cave is filled with Shyrack Wyrms and Tuk’ata. There are also ceramic jars dotted around the caves that may have valuable items inside. Make your way to the bridge and then in to the Secret Tomb.

3) Exit to Secret Tomb – When you’re high enough with either the light or dark side of the force you’ll be able to enter the Secret Tomb. You will have to go alone and leave your companions behind.

This is a strange area where you will relive some situations form your past. Your force points won’t recharge while you’re here so use them sparingly.

2) Darth Malak – You’ll encounter Darth Malak here and relive your battle with him. He has a few other Dark Jedi with him but just focus on taking down Malak as the encounter will end once he’s defeated.

3) Shyrack Wyrm Brood – You’ll find a swarm of Shyrack Wyrms here. You can either battle through them for the extra experience or go into stealth mode to sneak past them.

4) Mandalorian War Encounter – You will relive one of the decisions you made during the Mandalorian Wars. Your troops are unwilling to run through the mines. If you tell them the must then you’ll get Dark Side points. If you tell them that you’ll go alone then you’ll recieve Light Side points. The problem is that you’ll need to deal with all of the mines over the bridge yourself. You can use the Destroy Droid force power to get rid of them quickly. You’ll then be attacked by the Mandalorians. Your troops will help you to win the battle.

5) Fallen Jedi – You’ll find the remains of a Jedi here as well as a Datapad detailing her plans.

6) Kreia – An argument will begin between Kreia and the other party members. If you try to get them to work it out you’ll score Light Side points, If you side with Kreia to kill the others you’ll get Dark Side points. No matter what you choose you’ll be attacked by all of them. Focus on taking down Kreia as she’s the only one that matters. Once she’s gone the others will disappear.

7) Darth Revan – This is the final battle in the Secret Tomb. Once again focus only on Revan as the others will disappear once she’s defeated. Make sure you search the remains of Ludo Kresh for his Warsword and Armband.

When you are finished here open the eastern door for another exit back to the Shyrack Cave. Head out of the cave and make your way back to the Ebon Hawk. That’s all you need to do here. When you’re in the Ebon Hawk you’ll get an urgent message to return to Dxun. Either head there now to follow the Master of the Palace quest or continue on to Dantooine.