When you land at the Citadel Station you’ll be thrown in force cages. Someone will come in to kill you. When the force cage is taken down kill the assassin. The TSF forces will arrive and place you under house arrest.

While waiting to be released you’ll be visited by an Ithorian and then receive a call from Jana Lorso. They both want you to work for them. Soon you’ll be released from house arrest. Head out of the Apartment Complex C and use the Information Terminal. From this console you’ll be able to download the map area. 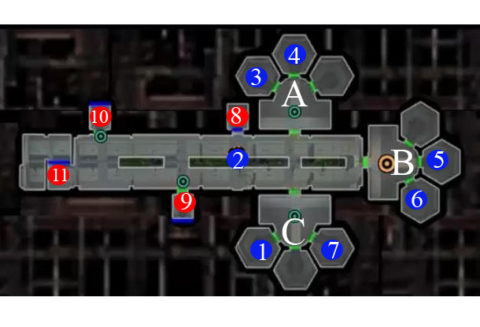 1) Apartment C1 – Your house arrest takes place in Apartment C1. After a few phone calls you’ll be given free access to the rest of the station.

2) Information Console – Visit this console to download the area map. Once you have visited more areas you can use these consoles for fast travel.

3) Harra – Rather stupidly this guy bet his girlfriend, Ramana, and lost her. You’ll find her dancing in the Cantina and can win her back through a game of Pazaak.

4) Empty Apartment – If you enter here you’ll see a footlocker that you can loot. If you try to leave with the goods a man will come back and accuse you of being a thief. Plead ignorance to get away with it or kill him for Dark Side points.

5) Droid Merchant – Opo Chano is a droid merchant where you can buy and sell droid parts. Later on you’ll have a quest with Opo once you have explored more of the station.

6) Arms Deal – This is the location for a Dark Side quest from Luxa in the Cantina.

7) Batono – This is a bounty quest that you receive from Lt. Grenn and you’ll find his location from Chodo Habat, the Ithorian.

First enter the Czerka Offices and speak with B-4D4. Tell him you’re here to see Jana Lorso. She will give you a job to visit the Docking Module and intercept the transfer of a droid in Shuttle Bay 2. Agree to take this mission if you are following the Dark Side. For the Light Side path you’ll want to take up the quest with the Ithorians, but first you need to get your stuff back. Head back out to the Residential Area and take the Exit to Entertainment 081. 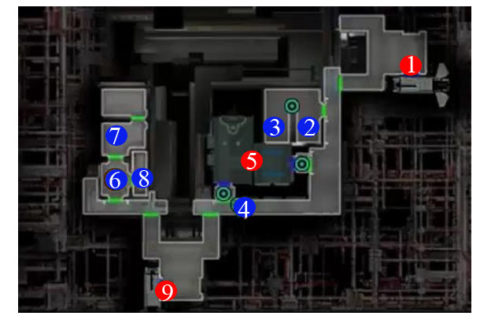 This area has the Cantina where you can enjoy some Pazaak or Swoop Racing, two merchant brothers for buying and selling goods and the TSF Office (Telos Security Force) where you can get your stuff back.

1) To Residential 082 East – You begin from #1. You want to make your way around to the TSF Office but you might as well stop in at the various sights along the way.

2) Dendis the Merchant – There are two merchants in this room. They both sell different kinds of items. Dendis is the good merchant whereas his brother trades in the black market. You’ll find some Pazaak cards and other items in his inventory.

3) Samhan Dobo – Sells weapons and armor as well as engaging smuggling and the black market. Once you find the Modified Blaster you can show it to Samhan for some extra quests.

4) Information Console – The console is located just outside the Cantina. Before you get there you’ll come across a Sullustan being harassed by a couple of mercenaries. If you defend the Sullustan you’ll get Light Side points or Dark Side points if you don’t. Use the console to download the area map.

5) Cantina – Come back here once you have your stuff back.

6) TSF Protocol Droid – This is the TSF Station. Ask the droid about the Ebon Hawk and then ask to get your posessions back. The droid will open the door to the locker room so you can retrieve your things.

7) Lieutenant Grenn – Open the door to the back of the office and speak with Lt. Grenn. Ask him about everything and you’ll find he has 3 bounties for you to complete.

Bounty on Batu Rem – This is the man pretending to be Batu Rem, who tried to assassinate you when you first arrived. Visit the Dock Module and visit Duros, the port authority, on the eastern side. Bribe him with 25 credits for information on Batu Rem and you’ll learn he came from Nar Shaddaa.

Bounty on Batono – Once again go to the Dock Module and visit the Czerka Officer. He’ll tell you to ask Jana Lorso in the Cerka Offices. Speak with Jana and mention Lt. Grenn. She’ll refer you to Chodo Habat, in the Ithorian Compound. Speak with Chodo and he’ll give you a key to Batono’s apartment in Residential 082 East #7 on the map. Either take him back to Lt. Grenn or hand him over to Jana Lorso.

Bounty on Escaped Criminals – Go to the Czerka Offices and speak with Jana Lorso. She’ll be speaking with the criminals as you enter. No matter what you do they’ll flee to Telos. You’ll come across them when you go down to the planet but you can lie to Lt. Grenn and say you’ve already killed them for your reward.

8) Lockers – Grab all of your items from the lockers here. You’ll need to re-equip everything.

9) Exit to Dock Module – Before visiting the Docks make sure you check out the Cantina and then go back to the residential area so you can reach the Residential 082 West.

By the bar you’ll find Luxa, the second in command for the Exchange, but she won’t talk to you until you’ve completed a quest from either the Ithorians or Czerka.

Next to the dancers you’ll spot Doton Het. He’s the guy who won the girl from Harra. You can win her back by paying 2,000 credits (1,500 with persuade) or play a game of Pazaak, with 1,000 credits on the table. He shouldn’t be too hard to beat. Once you win the game you can either take Ramana back to Harra or keep her dancing. You can then come back and take any credits that she earns.

You can also do some Swoop Racing here although the racing here is quite buggy and everytime I tried to race, the Swoop Bike ended up flying in the air. The room to the east has Pazaak tables and Mebla Dule, who you can play with or buy cards from. 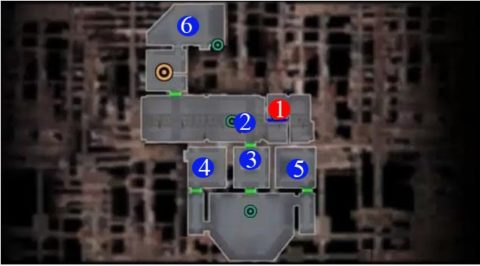 Your main contact for Light Side players in this area will be Chodo Habat at #4. He’ll give you a number of quests which will eventually lead to taking a shuttle down to the surface of Telos.

1) Exit to Residential 082 East – This is where you enter this section.

2) Information Console – Use the console to download the area map or for fast travel.

3) Ithorian Compound – Speak with the greeter and he’ll let you through to speak with their leader, Chodo Habat. Chodo has some connection with the force and will partially heal you once you finish your last quest with him.

Ithorian Droid – Escort the droid from Hangar Bay 2 at the Docking Module. Bring it back to Chodo for the Light Side path. During the battle at the Hangar Bay you’ll find a Modified Blaster on one of the mercenaries. For Dark Side points bring the droid back to the Jana Lorso at the Czerka Office. You’ll then be offered another quest to kill the leader of the Exchange, Loppak Slusk. You can make a plan to see him by speaking with Luxa in the Cantina. She’ll have a couple of quests you need to complete first. We’ll get to these in the Cantina section below.

Dealing with the Exchange – The Exchange are interferring in the restoration project. The Exchange leader is a guy called Loppak Slusk. Speak with Luxa and agree to take out Slusk. Visit the Bumani Exchange in Residential 082 East and this time you should be able to get in.

If you agree to kill Slusk you’ll also need to take out Luxa as she’ll turn on you. If you side with Slusk you can take out Luxa together and then convince Slusk to leave the Citadel Station. The third option is to kill them both together but you’ll need to fight everyone at once if you choose that path. Either way, with the Exchange dealt with return to Chodo and he’ll give you a Lightsaber Energy Cell Fixture. The first necessary part for building a Lightsaber.

Evidence of Czerka Corruption – In order to deal with the Czerka Corp for good you’ll need hard evidence of their corruption. Speak with Chodo and you’ll come up with a plan to access the Czerka Offices.

Make your way back to the Cantina and speak with Corrun Falt, who should be watching the dancers. Bribe (for 500 credits) or persuade Corrun Falt to reveal the tech guy, Opo Chano, in charge of looking after the droid. Opo Chano’s appartment is in Residential 082 East. See Luxa Quests for the Dark Side path.

Luxa Quests – After escorting the droid for Czerka or the Ithorians you’ll be asked to negotiate with or kill Slusk, the leader of the Exchange on Citadel Station. Luxa is the second in command for the Exchange and your ticket in.

If you come on behalf of the Ithorians (Light Side) then you’ll be able to negotiate with her but ultimately will have to accept her invitation to take out Slusk as there’s no other way into the Exchange.

If you come on behalf of Czerka (Dark Side) then she’ll have two more quests for you before letting you into the Exchange.

The second quest is to retrieve a debt that Opo Chano owes the Exchange. He’s not able to pay so your only choice for Dark Side points is to kill him.

After completing these quests Luxa will let you into the Exchange with a plan to overthrow Slusk.

Light Side – Head to apartment B2 and speak with the droid merchant Opo Chano. You need his credentials to get the droid B-4D4 but it will cost you 2,500 credits. Return to Chodo who will gladly give you the credits for this plan. Return to Opo and pay him the credits to get his credentials. Head over to the Czerka Office and speak with the droid. Tell him to follow you and take him back to the Ithorian Compound.

Dark Side – If you are following the dark side and going through Luxa’s quests she will tell you to get the debt back from Opo Chano. He doesn’t have the money so the only option is to kill him. This will at least set you up with a meeting with the Exchange boss, Slusk.

Speak with the Ithorian leader, Chodo Habat. Your quests with him are now complete. Ask about the healing and he’ll give you a +5 gain to your maximium force points. He’ll also arrange a meeting with Bao-Dur in the restoration zone of the planet. You’ll need to head to Ithorian Hangar Bay in the Dock Module.

As soon as you enter the Docking area you’ll receive a call from Mozo asking assistance. Mercenaries are attacking the Ithorian Compound and have Chodo trapped. When you enter you’ll be greeted by mercenaries. Defeat them and head down to the main area for another large skirmish. Next go to the Vivarium to rescue Mozo and get a key to Chodo’s Office. Run over to Chodo’s office and take down all the mercenaries. With that over you’re now ready to head to take the shuttle down to the planet.

Head down to the Dock Module and speak with the Ithorian outside Bay 2. Tell him that Chodo sent you to take a shuttle down to the planet and he’ll let you through. Enter the shuttle and enjoy the cut-scene as you fly down to Telos.